Philosophy professor Rev. Paul McNellis, S.J., explored the effects of the fleeting nature of most college relationships today in a talk entitled “The Hook-up Culture: The New Normal?” on Thursday evening.

Before offering critiques or alternatives to the hookup culture, McNellis examined the reasons why those who participate in it do so in the first place. Some of these reasons, he said, are that some of its participants might believe they are partaking in the type of self-discovery that should take place in college, be attracted to a connection that doesn’t require the time and effort of a commitment, or see hookups as a pleasurable way to deal with stress.

“I think what all of these reasons … to varying degrees have … a couple of presuppositions in common, and they’re the following: What I do with my body has no effect on me—my soul, my person—unless I want it to,” he said.

McNellis argued that men can justify hookups by convincing themselves that women want the same thing that they do—sexual pleasure, nothing more—but that this is hardly ever the case.

McNellis then specifically addressed the men in the room, suggesting to them that the most important question for them to answer while at Boston College was not about their majors or future careers, but about what kind of father they eventually want to be.

“Nothing you ever do will be as demanding as being a good father,” he said. “Ok, you’re in college now, but do you really think the habits and virtues necessary to being a good father can wait? Until when? When are you going to get on with the task of becoming a man, rather than remaining a boy?”

McNellis then urged the men to not participate in the hookup culture, but rather replace it with something better.

“Have the courage to be a better man,” he said. “Don’t say you love someone unless you really mean it. Don’t say it because she expects it. And when you do say it, back it up with what you actually do.”

McNellis said he is convinced that what fuels much of the hookup culture is not simply pleasure, but rather a fear of loneliness. While it may seem like any connection is better than none, he said, this is not actually true—what most people truly want is friendship.

“Work on living a chaste life, which is not the same as celibacy,” McNellis said. “Chastity means loving someone as they deserve—traditionally virginity before marriage, fidelity in marriage, or chastity in a celibate state.

“Think of what waiting for marriage might allow, what it might open up for you. Think of the kind of marriage that could grow out of a chaste courtship.”

McNellis argued that fidelity in marriage grows out of chastity before marriage—and that the reason some men wonder if they can be faithful after marriage is because they’ve never done it before. He continued on to say that, today, many women have come to expect very little of men and that this will only change if men, through their behavior toward women, start giving them concrete reasons for hope.

“Women … should say to themselves, ‘I’m worth waiting for,’ and men should say to them, ‘Yes you are, and I’ll prove how much I love you by waiting until I’ve promised my whole life to you ’til death do us part,” he said.

McNellis argued that the hookup culture develops habits of defensiveness and can negatively affect one’s emotional being—but that he doesn’t believe it is here to stay.

“Notice … I haven’t explicitly said anything about the Christian faith or the Catholic Church,” he said. “That was intentional: I wanted to demonstrate how far you can go in thinking through this just using reason and common sense—and an honest look at your emotions, inclinations, desires. Look at them as potentially revelatory of a deeper meaning about your life.” 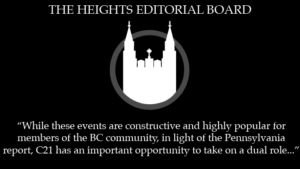