“This is a good way to put what our students have been studying in class to good use,” said professor Atef Ghobrial of the Department of Slavic and Eastern Languages.

Students, faculty, and friends poured into the room for a buffet-style serving of Arab food from Garlic ’n Lemons prior to the event’s commencement. Guests were treated to heaps of shawarma, hummus, baba ganoush, tabbouleh, and baklava.

The hosts—Mike Salib, MCAS ’18, and Ribhi El-Zaru, MCAS ’18—introduced the night’s theme: harmony. ASA chose the theme of harmony to set a tone of peace for the evening in spite of the international conflicts that ravage the Middle East. ASA then provided the audience with a taste of Middle Eastern fashion, including seasonal abayas—traditional Arab dresses donned by both women and men. The models graced the stage while the hosts read fictional backstories created by the students to provide information about how Arab Americans might find a place for Arab culture in their everyday lives. Hugh McMahon, MCAS ’20, portrayed an Arabic man who works in Chestnut Hill.

Next, students took the stage with an acoustic guitar and handheld candles to perform a song in Arabic. The religious song focused on the comfort of the Muslim faith and ended with the lyric with “You’re the one who never forgets me,” a token of appreciation for Allah. The lyrics of the song were translated in English on the screen at the back of the stage for the non-Arabic speakers in the audience.

A second musical performance featured separate groups of men and women facing each other from opposite sides of the stage while singing a traditional Arabic song. The crowd clapped along and perfectly punctuated the lyrics with jovial “hey”s before the two groups came together in the center of the stage and engaged in a partner dance.

Rayan Habbab, treasurer of ASA and MCAS ’20, took the stage to remind people of the struggle of people of Arabic heritage around the globe. Habbab cited the current plight of the Palestinians and asked the audience to partake in a moment of silence for the struggling people.

Harry Hoy, MCAS ’19, and Matt Aboukhater, MCAS ’20, next read a Mahmoud Darwish poem for the audience. Titled “Think of Others,” the poem urges those who are privileged to think of those who must go without—those with no access to clean water, those with nowhere to sleep, and those who have lost the right to speak. The poem reading was accompanied by a dramatic musical score to underscore the seriousness of the poem’s subject matter.

ASA next projected a video produced by the organization’s e-board to advertise some of the events the club organizes on campus. The video depicted members running and dancing around Gasson to traditional Arabic music.

Students in colorful garb convened on the stage to performed a belly dance routine, which consisted of jubilant clapping and slow body rolls. The female and male dancers took turns on the stage before pairing up to perform in partners for the crowd.

The final performance of the night was a dabke dance featuring students dressed in all black. The dancers crossed the stage in lines before forming one line at the back of the stage to perform synchronized kicks. The students left the stage and ventured into the crowd to invite audience members on stage to participate in the simple dance. Forming rotating circles on the stage, the audience members who chose to participate were immersed in Arab culture.

“My goal for Culture Show is that someone who maybe has never been exposed to Arab culture before to come to something like this and really feel at home, and then in their average day-to-day life to be more open to seeking out and experiencing Arab culture through food in Boston, events on campus, media, and movies,” Habbab said. 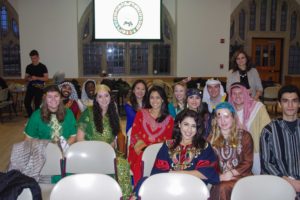