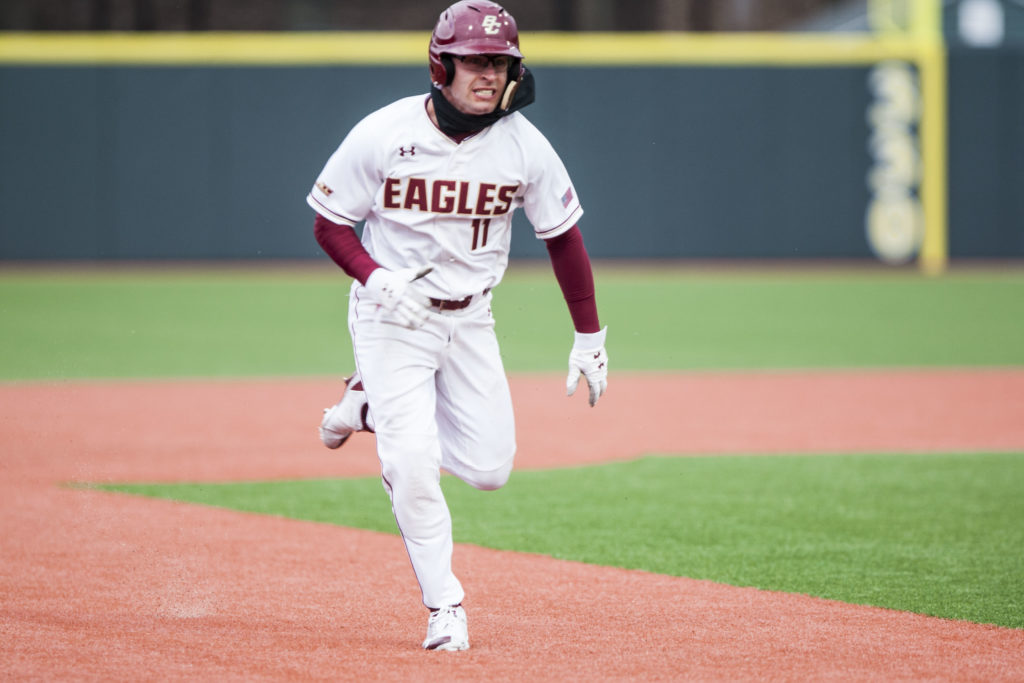 With losses piling up in every possible way—close games, blowouts on the road, and so on—Boston College baseball fans would be forgiven to have switched the radio broadcast off in the seventh inning of Wednesday night’s game against Dartmouth.

After all, a woeful offense that had been held to just two runs in its last four games combined had staked the pitching out to an early 3-0 lead, only to watch the bullpen falter—conceding three runs to the visiting Big Green. This time, though, another frustrating loss wasn’t in the cards.

Eagles shortstop Jake Palomaki roped a tie-breaking, two-run double to right field in the bottom of the seventh and the offense poured it on late, snapping a four-game losing streak with an 8-3 win over Dartmouth (9-17-1, 5-3-1 Ivy League) at home.

Starter Matt Gill worked into the sixth inning and after a hiccup in the middle innings, John Witkowski came on to work a pair of scoreless innings and secure the win. Backed up by a rare eight-run effort on offense, the Eagles (13-23, 5-13 Atlantic Coast) gained a much-needed win for momentum entering a pivotal conference series against Florida State.

Palomaki took leadership from the leadoff spot in the lineup, mashing his way to a 3-for-5 day with two runs, two doubles, and a triple. The senior scored a pair of runs, matched in part by Joe Suozzi and Jake Goodreau, who both added two runs and multi-hit games. The Eagles finished with 12 hits and left just five runners on base, a welcome sight for fans of the team after the showing over the weekend.

Gill allowed the first two batters of the game to reach, but quickly settled down as his offense backed him up early. He struck out the last two he faced in the first inning, then was promptly given a 1-0 lead. Palomaki opened the game with a triple to left field and was brought home on a full count groundout from Chris Galland.

In the second, Goodreau roped a leadoff double—then a costly error by Dartmouth’s Ubaldo Lopez brought in another run. An inning later, the Big Green quickly moved to a bullpen-by-committee approach, with mixed results—the relievers worked a scoreless pair of innings, but then they coughed up another run in the fifth.

In the fifth, Suozzi singled to left off of reliever Michael Parsons, and, an out later, Dartmouth opted for Patrick Peterson out of the pen. He was greeted rudely, as Palomaki kept up his impressive game with a double to right field to push the lead to 3-0.

Gill however, ran into trouble in the sixth. Despite getting a double play after the first two batters reached via a hit batsmen and a single, he wasn’t able to finish off the inning. Dustin Shirley singled to shortstop to bring in a run, then Blake Crossing lined a single up the middle to put two runners on—enough for BC manager Mike Gambino to pull the midweek starter.

Zach Stromberg just needed to get one more out, but wasn’t able to. He walked Oliver Campbell to load the bases, then hit Hayden Rappoport to allow Shirley to trot 90 feet home, pulling the Big Green within one. He was able to induce a flyout, but control issues would haunt him in the next frame.

He walked Lopez and Sean Sullivan to start the inning, the former on just four pitches. After a sacrifice bunt, Kyle Holbrook looped a game-tying sacrifice fly into left field, spoiling Gill’s chances at getting a win after his solid start. The Eagles evaded further damage when Palomaki—again exerting his will on the game—threw a runner out at the plate after an infield single.

In the bottom of the seventh, it was the senior again. After Suozzi doubled and Brian Dempsey reached on a two-base error with one out against Dartmouth’s Max Hunter, Palomaki lined the go-ahead double. Jack Cunningham added a RBI single before two more insurance runs came across in the eighth, with Suozzi singling in a run and Dempsey bringing in another via a safety squeeze.

For a team held to just 11 hits in its previous four games, totaling 12 in eight innings alone was nothing short of a rapid turnaround. The problem has been one of consistency this season, as prolonged slumps have led to BC limping to a record firmly below .500. If the Eagles are to make a late run, now is most definitely the time—they have a big weekend series against the Seminoles that includes the ALS game at Fenway Park, one of great significance to the squad.