Home » Choosing the Major You Love 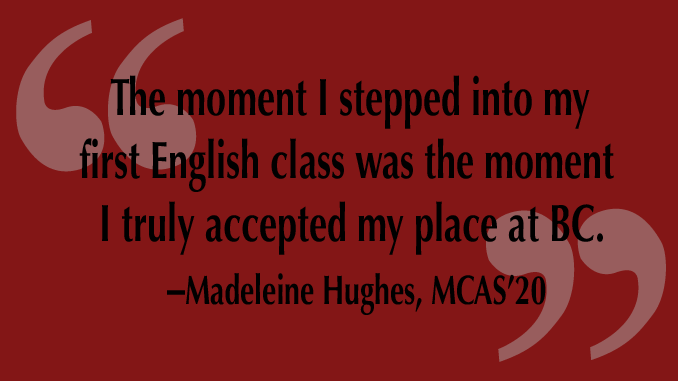 Choosing the Major You Love

April 7, class registration day, is even scarier than finals. Disagree with me if you want, but something about signing up for classes forces me to contend with the end of another school year and the beginning of a new academic chapter. What’s worse, the day always prompts deeper personal uncertainties. What is my major going to be? Am I happy in my classes right now? And perhaps the most daunting: Does all of college go by this fast?

In the face of a new, daunting year, it is all too easy to stick to an already established routine. Sure, maybe you can’t name a class that you truly enjoyed or found inspiring this year. But hey, you assure yourself, that’s just college. Classes aren’t always supposed to be extremely interesting. Wrong. The truth is, college is way too short to keep pretending. It is time to drop the major you declared just because it gives you the most career options, or because you don’t really know what else you might enjoy. Current studies and research demonstrate that a person’s college major is increasingly irrelevant. Whether you can’t decide on a major, or feel apathetic about the one you’ve already chosen, it is time to make a change. In the end, the work ethic and passion a person cultivates during the formative four years is much more valuable than the major written on your diploma at graduation.

My freshman year, I opened UIS and was suddenly flooded with uncertainty. Maybe it was the jarring effect of the freakishly dated software, but as I began entering the course numbers for orgo, I realized I was not anticipating any of my classes. I used to surf the course listings on Agora and dream about all of the history, English, and gender studies courses I wished to take. Then, I would quickly switch back to the biology courses, assuring myself that I wanted to be a doctor. The fact is, nothing was stopping me from taking those classes. I was my own largest obstacle, becoming so preoccupied with an idealized image of the status I would have and money I could make as a doctor, that I began silencing my true passions. Something clicked in that struggle with UIS—I gave myself permission to drop the pre-med program and start anew.

First, students need to reverse the way they approach declaring their college major. They often begin with the career. At Boston College, most students attempt to rush through the core so they can begin chipping away at a major as soon as possible. Students choose a major based off of what gives them the most career options instead of picking classes that pique their interests. In college, fields of study maintain rigid associations with certain career fields: If you want to be a lawyer, study political science; doctors, major in biology; bankers, major in finance in CSOM. In the real world, however, most students will enter into careers that have little to do with their college major. According to a recent study conducted by the United States Census, only 27.3 percent of college graduates end up in career fields related to their degree. College majors are important for engineers, architects, and computer scientists. For everyone else, a specific degree is only loosely associated with a person’s ultimate career.

According to The Wall Street Journal, “93% of respondent employers cite that critical thinking, communication, and problem-solving skills are more important than a job candidate’s undergraduate field of study.” I hate to break it to you, but your major alone will not give you the specialized skills that are necessary to become a successful Wall Street banker or star senator the first day out of college. All of that learning occurs during job training. Instead, the most important skill college teaches undergraduates is hard work and cultivating passion. Start finding your major based on the classes that excite you, not the career you envision for yourself (you’ll most likely end up changing your mind anyway). Never again in your life will you have the opportunity to work with esteemed faculty studying how to cure cancer in a lab or take a class that focuses on the literary accomplishments of black female writers. Whatever you do in college, be bold. Join a club that you are passionate about, apply for a research grant to delve more fully into an area of study that you love. Sign up for a service trip. Take a class that does not fulfill a major requirement. And, If you don’t know your major, don’t be afraid. There’s no need to rush. Feel free to experiment by taking classes that are radically different from one another.

The moment I stepped into my first English class was the moment I truly accepted my place at BC. I stopped forcing what I wanted to be, or where I saw myself in 10 years, and began accepting the real me. Come registration time, I hope that every BC student liberates themselves to do the same.