Home » Don’t Call Me a Liberal 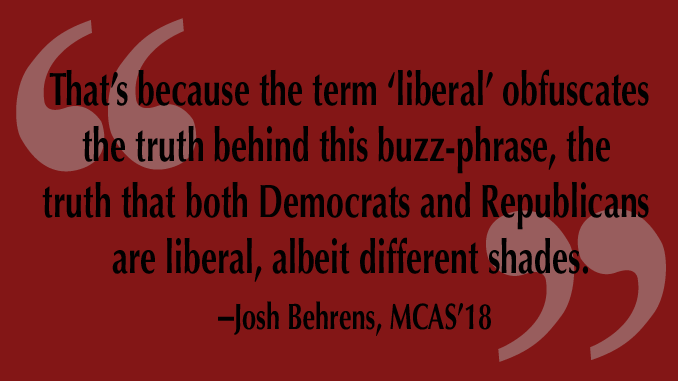 Don’t Call Me a Liberal

I often imagine the thoughts running through the heads of my conservative Facebook friends after they read yet another post of mine about universal health care or police brutality. As they sit hunched over their laptops in  dark dorms (at least this is how I like to imagine it), my Republican-leaning friends must mutter, “freaking liberal.”

I’m not a liberal. I’m a leftist. Within this seemingly small linguistic shift is a world of difference whose nuances are obscured by the false American dichotomy of liberal vs. conservative.

In order to understand the differences between “leftist” and “liberal,” let’s look at Boston College’s most popular political ideology. You guessed it: being “economically conservative” but “socially liberal.” Whenever I hear this phrase, it feels like a cheese grater is slowly being pulled down my face. That’s because the term “liberal” obfuscates the truth behind this buzz-phrase, the truth that both Democrats and Republicans are liberal, albeit different shades.

Liberalism arose out of the advent of modern day capitalism and its early thinkers like Adam Smith, John Locke, and David Ricardo. It promotes free markets, private enterprise, political democracy (though not entirely due to the fear of tyranny of the majority), and minimal government interference. Over the past 300 years, liberalism has evolved, but it still retains the central tenants of capitalist individualism combined with political democracy. In the United States, liberalism takes on two forms: neoclassical liberalism and neoliberalism.

Neoclassical liberalism is more commonly called libertarianism and is more or less what people refer to when they call themselves “economically conservative.” Neoclassical liberals believe the government should take as little of a role in the economy as possible, just like those early liberal thinkers. So yes, Paul Ryan is a liberal. Mitch McConnell is a liberal too. Mitt Romney? Total liberal. They might be “economically conservative” in American terminology, but their ideology harkens back to the heart of liberalism.

Now for those “socially liberal” folks. What we conceive as “liberalism” in America—a.k.a. the Democratic Party—is the other strand of liberalism called “neoliberalism” (note: I’m sorry, I know your eyes are now glazing over every time you read the word “liberal” at this point—I’ll try to keep it interesting, so bear with me). Neoliberalism is like neoclassical liberalism’s younger brother: It believes that the government should have a place in correcting market failures and that free markets are not the end-all-be-all of capitalist economics.

That’s the rub, though. Both neoclassical liberalism and neoliberalism believe fundamentally in capitalism. Even though they disagree on the role government should play within capitalism, both shades of liberalism are capitalist systems.

Being a leftist, however, is about rejecting the false dichotomy between shades of liberalism that only disagree on how to manage capitalism. Being a leftist means that you are anti-capitalist.

Just like liberalism, leftism has tons of shades. From democratic socialism to communism to anarchism, there are hundreds of different variations on what being anti-capitalist truly means. They all agree on one thing, though: The capitalist system is fundamentally broken and cannot be reformed. Leftists believe in true democracy that doesn’t just include political democracy but also includes economic democracy. The workers of the world deserve to have a democratic say over the management of their workplaces. This is why I hate being called a liberal. Liberals in the Democratic Party still fuel economic inequality and uphold the economic system that makes 50 million Americans hungry (including 17 million children). I will have no part in that.

Let’s return to the BC catchphrase “economically conservative but socially liberal.” We’ve covered the economics pretty well, but what about the social aspects of politics? Isn’t the Democratic Party progressive on social issues?

This is another place where liberals and leftists differ. Let’s take the issue of police brutality. Liberals within the Democratic Party call for tepid reforms such as body cameras. But as history has shown, body cameras can be turned off and/or muted in order to protect the police from being brought to justice for killing black and brown people. Leftists call for radical reforms such as ending our current system of policing so that the police cannot possibly inhabit a power structure that would allow them to kill and maim innocent citizens. Leftists point out that prisons and the death penalty are not forms of restorative justice and that any society that practices imprisoning and killing large portions of its population will never be a just society.

It boils down to the fact that liberals believe in individual reforms while leftists see the necessity for systemic change. Yes, the Democratic Party advocates for government support of programs such as Medicare and Social Security, but it is only to ensure that the capitalist system keeps humming along. So if anyone asks me what my political identity is, I’ll respond, “I’m economically leftist and socially radical.” You should too.