Home » LTE: In Response to: “Two Students Accused of Property Damage For Chalking”
Opinions, Letters To The Editor

LTE: In Response to: “Two Students Accused of Property Damage For Chalking”

The state of free speech on college campuses has been in the news a lot lately. The narrative goes something like this: Today’s college students are snowflakes. They’re hostile to free speech because it reinforces inequality. Because it creates hostile environments. Because it allows horrible people to say horrible things. But Boston College challenges this narrative. This is because the snowflakes at BC aren’t college students. They’re administrators.

Hiding behind the veil of BC’s Jesuit, Catholic heritage and concerns about “safety” and “campus disruption,” administrators require students to get permission before demonstrating on campus. Before posting a flier on campus. Before protesting silently on campus. And, as The Gavel and The Heights recently reported, before chalking on campus. The administration’s fear that letting a few students distribute condoms and information about healthy sex practices on campus could bring down a nearly 2,000-year-old religion would be laughable if it weren’t a pretext for controlling students’ speech. And the administration’s latest decision to charge students with “property damage” for chalking heretical messages like “What would Jesus do?” and “Be better BC” and—you guessed it—“Black lives matter” wouldn’t ordinarily merit more than an eye roll. But this isn’t about condoms or chalk. It’s about free speech.

In 1996, BC’s Board of Trustees adopted a new mission statement that pays lip service to “free intellectual inquiry,” the “important contribution a diverse student body … can offer,” and “academic freedom.” Perhaps my four years at BC failed me—or perhaps I just didn’t have room in my schedule to register for Not Practicing What You Preach 101—but I don’t see how that mission statement translates into disciplining students for trying to engage the campus community on topics ranging from investments in fossil fuel companies to police shootings.

Condoms are controversial. Fine. Chestnut Hill could experience a severe drought that leaves non-administration-approved messages caked on well-traveled sidewalks for days—even weeks. Sure. Those issues aside, how do you reconcile BC’s requirement that students get administrators’ approval before they share their views on campus—without latex, without chalk—and BC’s claim that its students are bright and committed to making the world more just? It appears the University trusts its students enough to accept them, charge them a guaranteed-to-go-up-4-percent-annually-regardless-of-inflation tuition rate of $54,600 per year, and promote their talents and achievements in publicity materials. But not enough to let them express their opinions without the administration’s consent. 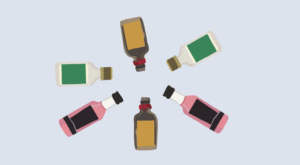 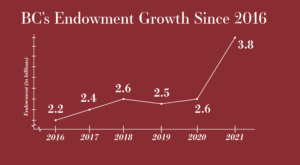 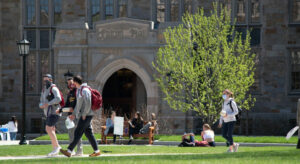