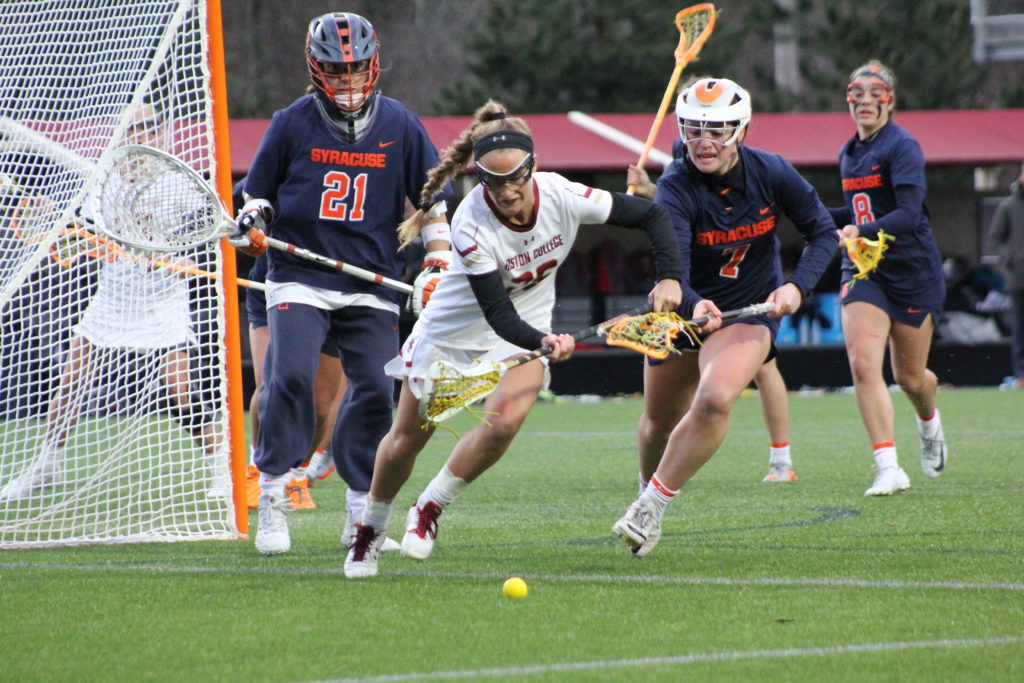 An undefeated season is remarkable in any sport, but what Boston College lacrosse managed to secure Wednesday night—an undefeated season in the ACC after beating 10 ranked teams, with six of those wins coming in conference play—is truly an incredible feat.

Interestingly enough, the matchup against Syracuse, which ended with a final score of 13-12, was the first time that BC had to eek out a close game in the final seconds all season.

“That was … one game scenario we hadn’t faced before postseason, so we kind of got that experience, we got it out of the way,” Walker-Weinstein said. “We came up on the right end of it so it’s just more experience for us, which is awesome.”

The coach is already looking ahead to the postseason, even having just secured the regular season title.

So considering the thrilling finish and significance of the game, let’s take a closer look at what went right against Syracuse and what the team needs to improve upon going into ACC’s.

It comes as no surprise to fans who have followed the No. 2 Eagles (17-0, 7-0 Atlantic Coast) all season that the reason BC won this game was that Sam Apuzzo was incredible. As good as No. 16 Syracuse (8-8, 0-6) goalkeeper Asa Goldstock was (12 saves, nine in the second half), Apuzzo—who recorded five goals and three assists, upping her season-point total to 99—was just that much better. It doesn’t take a rocket scientist to figure out that 99 points in 17 games is mind-meltingly incredible, but a casual observer may not have seen the five-goal effort in the final game of the season as anything more than excellent.

The truth couldn’t be any farther from that. The Eagles managed 37 shots for the game—Apuzzo led the team with nine. Tess Chandler was the only BC player to come close to the efficiency Apuzzo showcased. Without Apuzzo, the Eagles would have had a hard time keeping pace with the Orange, especially the way Goldstock was playing. It wasn’t BC’s fault, but the Syracuse goaltender neutralized Kaileen Hart and Dempsey Arsenault better than any team has all season. Still, neither she nor the countless defenders thrown at Apuzzo could slow down the junior attacker.

In addition, Apuzzo won seven draw controls and a ground ball, coughing up possession just a single time over the course of the hour. Also, she scored the team’s last three goals, the final one coming with 1.7 seconds left in a tie game with an undefeated season on the line.

If BC makes a run for the national title, as good as the supporting players on this team are, it will be because Apuzzo is one of, if not the, the best attackers in college lacrosse.

As talented as the Eagles are, there are times when blunt force just works better. Chandler, who is 6 feet tall, often gives BC’s midfielders an outlet on the attacking end when they can’t finagle their way through tough defenses like Syracuse’s. Chandler notched a hat-trick in this one, scoring on three of her seven shots. She isn’t necessarily blowing by defenders, but Chandler is deceptively quick, and whenever she cuts to the front of the net, Apuzzo, Arsenault, and Hart can usually find her either towering over defenders or slipping into open space with relative ease.

Chandler is vital to BC’s success. As strong as the three-headed monster of Apuzzo, Arsenault, and Hart has been, the redshirt senior’s 33 goals are evidence that the Eagles are as deep as it gets when it comes to the attacking line.

The Eagles’ flashiest players can be found on the offensive end of the field, but their defense can’t be slept on either. Against the Orange, BC’s defense got to 31 ground balls, went 12-for-13 on clearing attempts, and goalkeeper Lauren Daly pulled in seven saves—including six in the second half. Syracuse had its moments where it found open space, but down the stretch, the Eagles’ defense really kicked into gear, holding strong in the final five minutes to prevent the Orange from snuffing out the BC comeback with a goal of its own.

Although Arsenault was the team’s leader in ground balls (four), Elizabeth Miller, Brooke Troy, and Christina Walsh all nabbed three of their own. In addition, the group caused 19 turnovers and forced Goldstock to step out of bounds late with less than 30 seconds to go to give Arsenault, Elizabeth Taylor, and Apuzzo a chance to go for glory in the closing moments.

To top it all off, the group kept Syracuse off the board on all six of the free-position chances the Orange got.

Daly deserves credit as well, bailing BC out with a few key saves beyond the one she made with two minutes to go. Sam Swart was a problem for the Eagles all day (two goals on five shots), but with 20 minutes to go, Daly got her stick on a close-range shot from Swart that ended up preventing the Syracuse midfielder from recording a hat trick. The save came during Syracuse’s best stretch of the game—where it scored three-consecutive goals to tie it all up at 10. If Daly doesn’t make that stop, the entire game plays out differently. Perhaps BC still wins, but her efforts, and those of the defensive corps in front of her, shouldn’t go unnoticed in the shadow of the attention the Eagles’ offense gets.

As good as BC looked at times in this game, it did surrender two three-goal runs and one four-goal run to Syracuse. Both times this happened, the Orange only managed to knot the game up, but the trend is somewhat startling. Both Apuzzo and Walker-Weinstein immediately credited Syracuse for putting in an excellent performance postgame, citing how well-coached and gritty the opposing group was. As good as Goldstock looked, the more concerning development for BC has to be struggling to hold on to three- and four-goal leads multiple times in a game.

That kind of complacency can be extremely costly in postseason play, and although the Eagles have proved themselves time and time again, that doesn’t mean a certain confluence of events could push them out of the postseason if they don’t finish off teams when they get the chance.

Turns out, BC managed to pull that off. But, scoring 13 times on 37 shots is, as Walker-Weinstein called it, a bad shooting day. Goldstock was impressive, but the Eagles whipped too many balls wide and had far too much trouble converting on free-position chances—they went 0-for-9, even though it should be noted Arsenault was mere millimeters from converting chance number nine when she rang her shot off the crossbar.

Perhaps the group was too reliant on Chandler and Apuzzo. Both serve as excellent get-out-of jail-free cards when BC struggles to put the ball in the net, but to have postseason success, it would appear that Hart and Arsenault are going to need to find the net early and often—their usual production was sorely missed at times against the Orange.

Fourteen turnovers in 60 minutes isn’t bad by any means, but, at times, BC was sloppy in this one. Chandler and Arsenault gave the ball away three times each, and Schurr did it four times herself. Those are players who are going to see a lot of the ball during postseason play, and they’re all going to be under a lot of ball pressure since teams are going to look back at the way Dartmouth, Virginia Tech, and Syracuse played BC down the stretch of the season. As long as this Eagles can keep the turnover margin positive—as they did in this game—they should still come out on top when it matters.