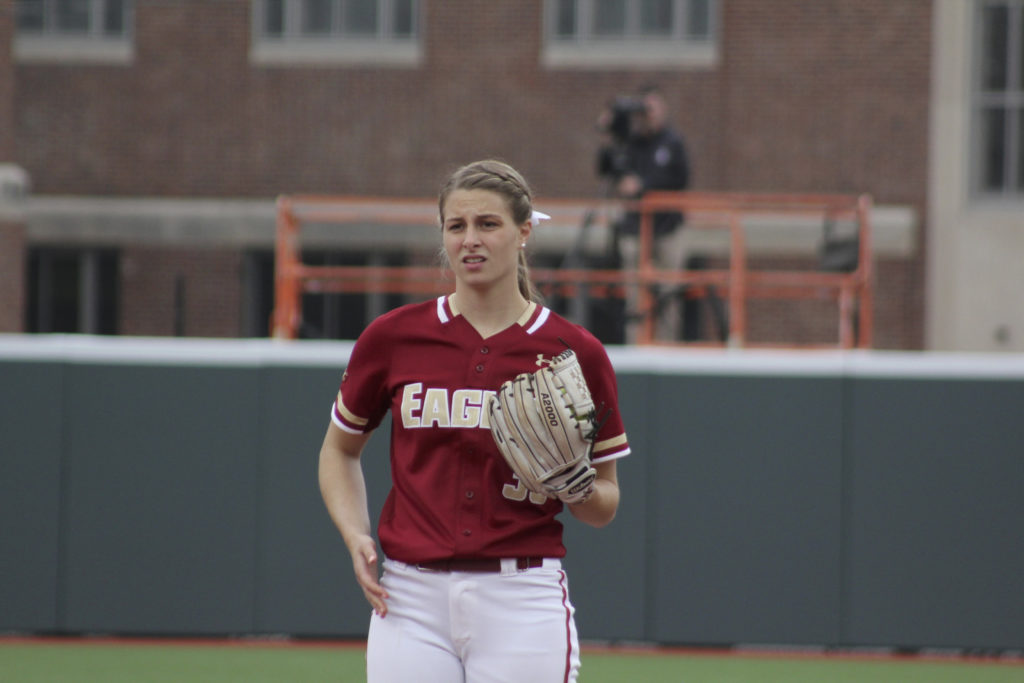 Notre Dame (29-14, 12-6 Atlantic Coast) chased the Eagles (22-18, 9-6) ace after just seven batters faced, and eventually got to Frei’s replacement, Jessica Dreswick, as well. Combined, the BC duo gave up 10 hits and walked six batters—additionally failing to record a strikeout for the first time since March 28 against Boston University.

Frei hit Abby Sweet with her second pitch of the ballgame, an ominous sign to start the day. After a sacrifice bunt, further command struggles saw Katie Marino reach on a four-pitch walk, then a wild pitch moved both of the runners over. After a sacrifice fly from Cait Brooks, the Irish lineup began to tee off.

Morgan Reed doubled in a run down the left field line, and Melissa Rochford followed with an RBI triple in the same direction. After a passed ball brought in a run and Frei issued yet another four-pitch walk, Eagles head coach Ashley Obrest had seen enough. She made the call to the bullpen, marking Frei’s shortest outing of the season.

Irish freshman Alexis Holloway, meanwhile, had an up-and-down outing. After escaping trouble in the first, she coughed up a run in the second. Lexi DiEmmanuele singled, stole second and third, and came home on a sacrifice fly from Jordan Chimento. That was all the Eagles would get until late, though, as Holloway started to cruise.

She struck out C.C. Cook to end the third, starting a run of six BC batters retired in a row. Then, even when Holloway ran into trouble, she methodically worked out of it—a single and a walk in the fifth was erased by a pivotal strikeout.

Dreswick, meanwhile, locked it down for four scoreless innings before running into trouble. In the sixth, with the Eagles within three, she was greeted rudely—Holloway doubled to right-center. A single from Alexis Bazos and an error moved two into scoring position, and the wheels came off.

Ali Wester brought in a run with a sacrifice fly to left, Marino doubled in another, and Brooks capped the sixth inning by lacing a single up the middle—pushing Notre Dame up by six. The Irish offense consistently got good swings off of BC’s vaunted duo, and with the lineup silent for much of the game—it managed seven hits but stranded six—it was set to be a long day at the office.

Holloway coughed up two runs in the bottom of the sixth, as Emme Martinez had an RBI double and Chimento singled in a run, but Notre Dame was ready with a response. With BC down four, Dreswick issued a walk, gave up a single, and let in another run on a Bazos groundout. In the bottom of the seventh, the Eagles rallied to push across a run via a Murphy double, but stranded two and went down quietly.

It was a disappointing opening to the series for the Eagles, who are testing their mettle against the teams ahead of them in the Atlantic Division. BC has proven its talent with the recent lengthy winning streak and taking one of three against the conference-leading Seminoles, but it’ll need to turn it around during the rest of the weekend to mark its place within the conference. That’ll have to start with better pitching and less missed chances on the basepaths.