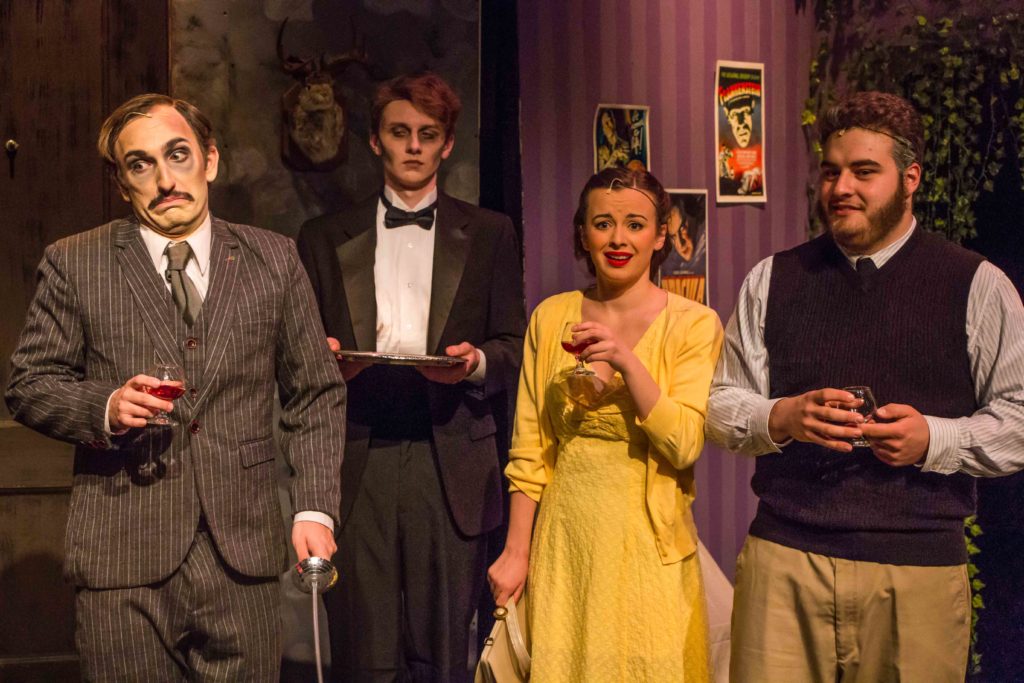 Teenage love comes in all sorts of unsightly spectacles. Broken hearts, suicide vows, and painful longings are just some of the go-tos for hormonal adolescents. But rarely does a love story set forth such romantic morbidity as the Dramatics Society’s most recent production, The Addams Family. Adapted from a 2009 musical, this ghoulish giggle draws in the viewer with perhaps familiar characters (for many, the Addams are on par with the Simpsons and Kennedys), and puts a Gothic, but modern spin on the inciendary forces that draw apart and bring together families of all kinds—even the dead ones.

With that said, “dead” is the last word to describe the Addams musical. As if struck by a bolt of lightning (which is mimed hilariously by the supposedly mute Frankenstein Lurch (Hal Knowlton, MCAS ’21) while reenacting his origin story and the crazed events that follow it), it comes to life with extravagantly personal performances and immersive choreography. The actors ooze a wealth of subtle emotions, switching in instants from sympathy to scurvyness, all informed by a confrontational sincerity that gnaws at the heart of the audience. The musical jingles don’t hurt either—hip-shaking salsa and epicly symphonic operas carry the narrative through the twists and turns of an everyday middle-class household that stands 6 feet under.

Indeed, the Addams home is like an inverted archetype of bourgeoise suburbia: The opening song, “When You’re an Addams,” extravagantly parodies the death and mundanity that is central to their functioning as a nuclear family. It is thus quite poignantly hilarious when Wednesday (Sophia Chryssofos, MCAS ’21), Gomez’s (Jeremy Harris, MCAS ’21) daughter, finds herself soon-to-be engaged with a boy of “normal” upbringing. Wednesday confides in her father under the promise that he will not tell her mother, Morticia (Jessie Shaw, MCAS ’19). Cue the moral dilemma: Gomez has promised to never lie to either woman. The perilous marriage is reflected in the parents of Lucas Beineke (Grant Whitney, MCAS ’21), the boy to whom Wednesday is engaged. When the three come over to the Addams’ residence for dinner, other family squabbles cause things to take an unfortunate turn, despite the honest efforts of Wednesday to retain an illusion of normalcy.

While many collegiate actors may find the family dynamic difficult to pull off—there are, after all, two parents, a balding Igor-like uncle, a small 10-year-old child, and even a half-dead hippy grandma—the cast of Addams smoothly fall into their relationships, as if raising children (or, conversely, raising tantrums) was second nature. Harris shines first and foremost as Gomez, a swathe yet sensitive father who seeks the best for his daughter while never foregoing the mercurial temperament that makes his character full of surprises. Alice Beineke (Lauren Strauss, MCAS ’18), Lucas’ mother, develops from a giddy housewife with a penchant for poetry into the convincing portrait of a woman confronting the realities of her marriage.

Her dialogue with Morticia is some of the richest in the play, and reveals the ironic duplicity of the Addams’ fascination with the macabre: It is not an authentic morbidity, but a means to conceal their unrealistically idealistic connubial vows. To counter the drama of these half-dead suburbanites is Gomez’s “bald, fat, and sexually ambiguous” brother, Fester (Tommy Boyce, CSOM ’21), who acts as a sort of meta-narrator in dialogue with the audience. He supports Wednesday’s endeavors toward love, even when he is ridiculed for his unrelenting (yet never foolhardy) optimism.

Heartfelt confessions mix with the most unexpected metaphors and references in the play’s many musical numbers. Wednesday expresses her confliction toward love in the song “Pulled,” where she sings of her repulsion in-principle toward cute things like puppy-dogs, unicorns, and Disney World, despite finding herself suddenly attracted to the gooshiness of romance. The paradoxes continue in the song “Morticia,” in which Gomez pines for his wife and all the deathly parts of her that make him feel alive. “The Moon and Me” opens with Fester playing the ukulele as he pines for his one true love, the moon. It is symbolic of the larger conflict between embracing love and danger and retreating from life’s impulsivity: a thematic struggle resolved in the last song, “Move Toward the Darkness,” a resounding and operatic finale that best embodies a statement sung by Gomez: “At the moment we start weeping, that’s when we should smile.”

Correction: This article originally stated that Emma Howe played the role of Alice Beineke. In fact, this role was played by Lauren Strauss.

the addams family musical the dramatics society
On One Hand, Coffee; On the Other, Soup: TU/TD
‘Mercury 13’ Uncovers NASA’s Female Astronaut Initiative