Shady Lady Steps Out of the Shadows

If you walk down the halls of Carney on a Tuesday night, you might hear the sound of folkish guitar riffs and chipper tambourine bouncing off the brick walls. The downtrodden academic building is the practice spot of one of Boston College’s newest bands: Shady Lady.

“We’ve always all jammed, but then we decided let’s make a band solely kinda for Battle of the Bands but now it’s actually really fun,” Moran said.

Shady Lady formed fairly recently, just in time for the six to compete in Battle of the Bands on March 15, and make it to the second round to compete for a chance to open at Modstock. Because many of the musical members were already committed to other bands on campus, it wasn’t always clear if they would get the opportunity to play together. Moon is in Unit One, with whom she is currently working on an LP, and she played guitar for Funky Giant at Battle of the Bands. Eichler is the drummer for Little Saturday, last year’s winner of Battle of the Bands, and he joined PHEW, a band of sophomores, this year. Kelleher is a member of Small Talk, and although all of the band’s other members have graduated from BC already she still performs with them around Boston and the Northeast.

Although not members of any formal bands other than Shady Lady on campus, Rodger and Moran first performed together at their first Music Guild open mic during their freshman year. The two met because they both had singles in Fitzgerald on Upper and feared they would find trouble making friends as a result. Both have also competed in Sing It to the Heights and performed the national anthem at a BC basketball game together. Rooney, who the other members endearingly call “Caro,” has a solo EP on Bandcamp and Soundcloud and has been dubbed the “resident folk master” by her bandmates.

As busy members of the BC music community, the group members feel that their coming together is much bigger than themselves: Shady Lady is currently the only majority female band on campus.

“There’s never been an all-girl band,” Kelleher said, Eichler interrupting to clarify that there still isn’t. “But we are a majority girl band, and the original thought was to be a girl band.”

Eichler finds enjoyment in being surrounded by such talented women. Dubbed “resident Shady Matey” by his female friends, Eichler fits right in with the attitude and style of the band. After Moon joked he may wear an eyepatch for their upcoming performances a chorus of laughter ensued and there was talk of having the sole male member don a pink bob wig for his shows with the majority female band.

“I’m very down with it because these are all some pretty cool shady ladies I’m playing with,” Eichler said. “I like it, I like our sound, I like our vibe—I like the girl band vibe.”

“That’s what girl power is all about, men and women coming together,” Rooney added.

The girl-and-one-boy band wanted the name to reflect its style. The members flirted with a few names, some of which included expletives, before deciding against them. One standout competitor was The Kitchen, a subtle jab at traditional patriarchal gender roles. The band finally found the one when watching Mamma Mia.

“Friends were over at my house watching Mamma Mia, and the Mamma Mia trio, they are the ‘Shady Ladies,’” Rooney said. “But one of my roommates was like, ‘Y’all should be ‘The Shady Ladies,’ but we cut it down to just ‘Shady Lady.’”

To complement its name, the band has already picked a phrase to perfectly encapsulate its unique sound: “Indie folk-rock girl band.” The band does pull inspiration from many genres: blues, folk, funk, pop, and rock. The bandmates cited rock as the genre that pulls them all together, the screw in the glasses of Shady Lady. When asked about individual artists they look to for inspiration, the members offered an eclectic mix of musicians. Kelleher cited The Staves, an English folk rock sister trio, as one of her favorites. Rodger mentioned the Los Angeles based Lucius, an indie pop band. Snail Mail was another band the members could agree on.

“I wouldn’t mind being quoted in The Heights for the second time saying that I’m a big Coldplay fan,” Eichler added.

The task of writing the band’s pieces is shared among the members. A collaborative effort, Moon stated that the process is often initiated by someone coming up with “bones, like a skeleton song” that allows everyone to add and contribute. Moon often finds herself writing about personal growth, while other members turn to “heartbreak, sadness, and boys.” The bandmates laughed at their choice in subject matter.

The band suspects people may have been surprised at how quickly it found its groove. Only in existence for one month before its impressive performance at Battle of the Bands, the group worked hard to define its sound before the live performance. Hard work paid off for Shady Lady.

“I thought [Battle of the Bands] was really fun—it was really high energy,” Moran said. “We knew a lot of people in the crowd so we really fed off of that energy, and I think it was actually cool that we got to start off because I don’t think people expected us to sound as professional as we did. We spent a lot of hours putting in work to throw it all together, and then it came together really nicely on stage.”

Because the bandmates are all entangled in other commitments on campus, they have to make practice a priority to be successful on the competitive BC music scene. Their hard work takes place on Tuesday nights, the one time where everyone is free during the week. To put in extra hours, the band breaks off and does a lot of pair work throughout the week as well. The group starts each practice by “goofing off for an inordinate amount of time,” according to Moon, highlighting the light-hearted attitude of the band. Impromptu practices are also a common occurrence for the girl group, however.

“We are also kinda just friends,” Rooney said. “The other day we were just hanging out in Rachel’s room.”

While these hangouts sometimes turn into jam sessions, the band makes sure to put time aside to just be friends. When the bonded-bandmates of Shady Lady aren’t learning new chords or harmonizing, they like to watch The Unbreakable Kimmy Schmidt and make homemade applesauce.

When Shady Lady gets down to business, it focuses on the details of each song: chord progression, harmonies, how the drums should feel. The band members like to record their practice sessions on their phones and listen to the recordings throughout the day—this clever trick allows each member to learn and nitpick each detail of a song.

Joining together to make music has been strenuous on some bands in the past—Fleetwood Mac and The Eagles both lost and gained several band members due to tiffs over the years, while The White Stripes ended in divorce for guitarist Jack White and drummer Meg White. Shady Lady, however, doesn’t see disagreement as a problem for the band.

“It’s important [to be open] on both ends, whoever is saying a critique and whoever is receiving it,” Moon said.

The band relies on its love and friendship to carry it through long practices and the occasional critique. The openness of their relationships allows the bandmates to push each other to be the best and most creative they can be. At the end of the day, the six students share a love of music and a love for each other that is much more important than any song they could write.

The future for Shady Lady looks bright. Getting its second major live performance under their belt on April 21 at Break the Bubble, a Music Guild sponsored open mic in front of Faneuil Hall in downtown Boston, the band appears prepped and ready to give its best at BC’s Best at Arts Fest on Thursday, April 26. Despite Kelleher’s impending graduation, the band plans to stay together in the coming years—Kelleher is staying in the Boston area and hopes to record and perform with the band after college. Shady Lady is currently trying to grow its repertoire before seeking off campus spaces to perform in to try to expand its fanbase beyond the BC community. For now, the focus remains on finishing off Battle of the Bands at BC’s Best.

“Music Guild made BC feel like an actual home, so to win [Battle of the Bands] in this community would just mean a lot,” she said. 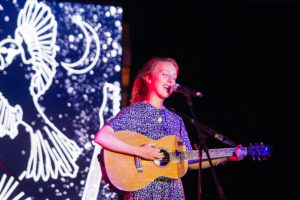