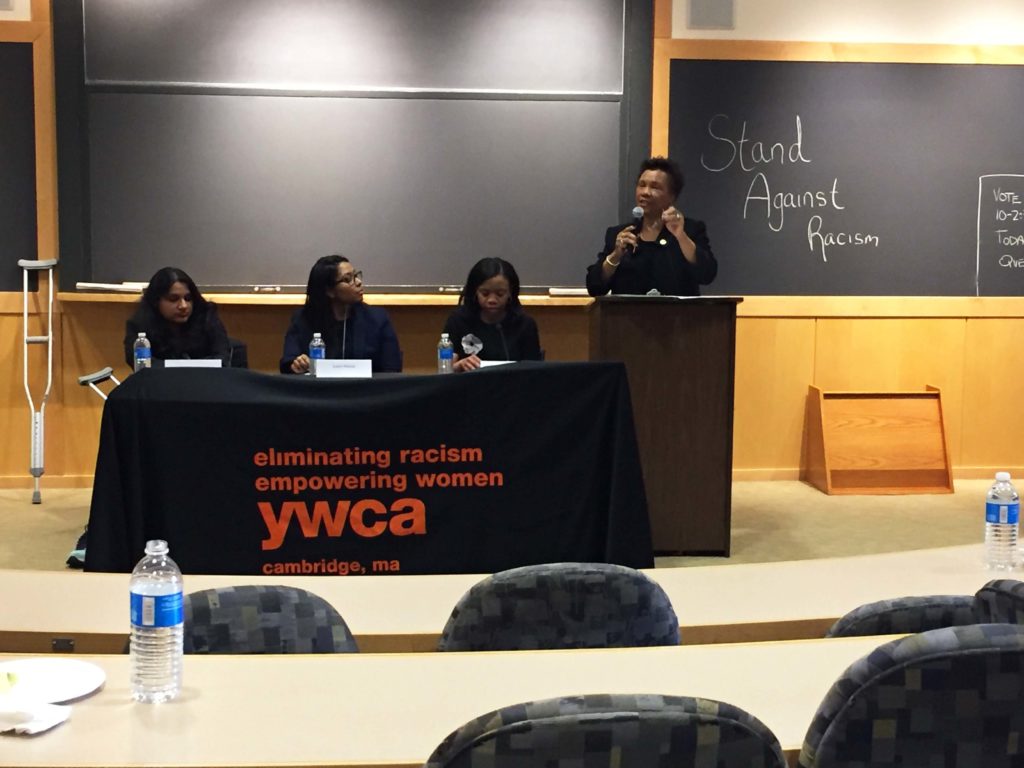 “Stand Up Against Racism” Sparks Timely Dialogue on Civic Engagement

Boston residents gathered in a lecture hall at Harvard Law School Saturday afternoon to discuss voting rights and civic engagement. Organized by YWCA, the event was part of the organization’s annual “Stand Up Against Racism” campaign and sought to address the need for women and women of color to become more involved in politics.

Outside the lecture hall, next to a table of snacks, representatives from Emerge America, an organization dedicated to recruiting, training, and supporting Democratic women to run for political office, handed out information. In between bites of fruit and cheese, participants registered to vote, signed up to participate in Emerge training programs, and networked with local representatives and government officials.

The main goal of the program was to provide women with what government too often lacks: community. Participants heard from a panel of women of color currently serving in office who described their experiences running, the importance of voting, and how to get involved.

The first speaker to take the podium was Diana Hwang, the founder and executive director of the Asian-American Women’s Political Initiative (AAWPI) and a former candidate for State Senate, who shared her story and stressed that there is a deep need for diversity in public office.

Hwang’s first job out of college was working at Boston City Hall, followed by a stint at the State House.

“In both of these buildings, buildings of incredible power, I was always one of the only Asian American woman,” Hwang said. “This was 2007 by the way.”

While she quickly rose through the ranks, Hwang said she couldn’t help but feel invisible at times.

“When government doesn’t look like you, the message is really that you don’t belong,” she said.

In response, Hwang decided to found AAWPI in 2009, an organization that works to fill the missing political clout in the Asian American community by creating a pipeline to recruit and train the next generation of Asian American women leaders in politics. So far, Hwang has graduated over 60 young women from the program and said that the girls she worked with inspired her to run for senate in 2016.

“On election day, I was standing at a poll in Chinatown, and a mother and her 7-year-old daughter came up to me,” Hwang said. “The mother said to me, ‘I came to vote for you because she told me to.’ It was so powerful, because I was that little girl.”

First, the panel discussed what brought them to public office. Matias immigrated to the U.S. with her family at the age of 5 from the Dominican Republic. Before running for office, she worked as a legal aid attorney and represented unaccompanied minors in deportation procedures.

“It was being in the court system and watching the way people were treated differently based on their race and socio-economic standing that pushed me to get involved,” she said.

Siddiqui said she was motivated to run for office after identifying the lack of diversity in the Cambridge city council.

“The underrepresentation of female elected officials, particularly women of color, is a missed opportunity for the empowerment of underserved communities,” she said. “You can’t be what you don’t see.”

Bowman echoed Siddiqui and urged the audience to get involved in the political process.

“I cannot tell you how important it is that our legislative bodies actually look like the communities they represent,” she said. “Our perspective is so important, there are so many things that go on unaddressed because our voices are not part of the conversation.”

Matias concluded by saying that no matter what, you can’t be afraid to get involved—that everyone is worthy to run for public office.

“There have been times when I have been in the chamber of the State House, and officers have come up to me and said ‘Excuse me you’re an aide, you can’t be in here,’” Matias said. “And I look them right in the face and say no, I’m not an aide, I’m a state representative.

“You are going to find that even after you hold a position, people question your ability when you walk into a room. I don’t let it get to me, and neither should you. I am breaking barriers. Help break them with me.”