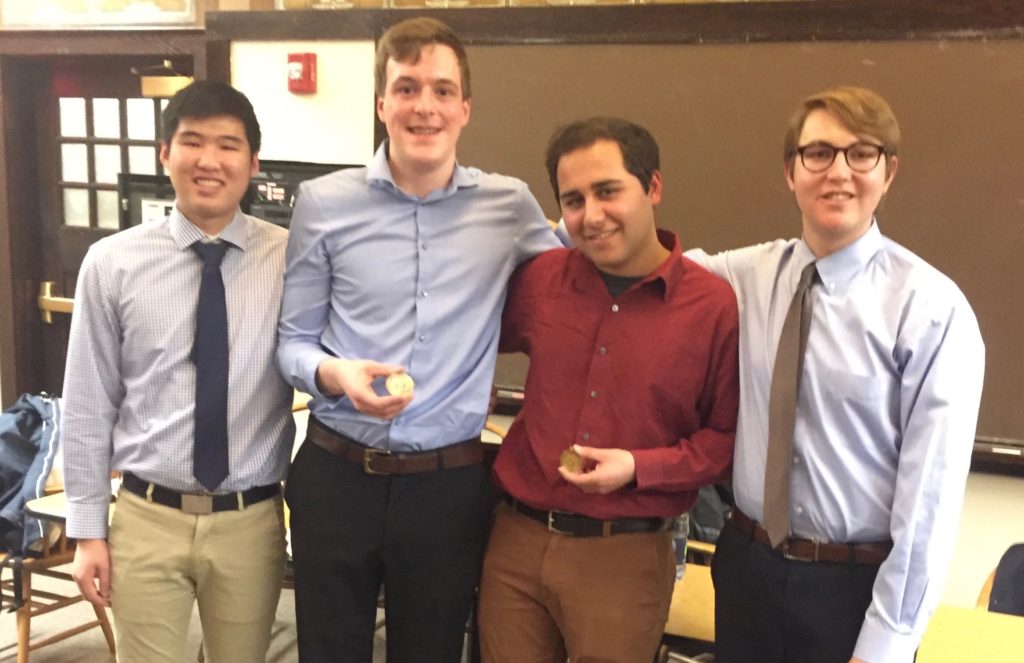 On Thursday evening, four members of the Fulton Debating Society participated in the 126th Annual Fulton Prize Debate—this year’s topic: whether the United States should establish a system of single-payer health insurance—for the opportunity to have their name calligraphed on “The Great Wall” in Gasson 305 next to the names of each of the debate’s victors since 1890.

The debaters first presented constructive speeches expressing their main arguments, each of which was followed by a cross-examination by the opposing team.

The first speaker for the affirmative team, Noah Valdez, MCAS ’21, argued that the current coverage offered by Affordable Care Act is deficient—under it, many either lack access to health insurance or face high copayments and deductibles—and that the system is unable to control costs.

Given the flaws with the current for-profit health care system, he advocated for the adoption of a single-payer proposal that guarantees Universal coverage and eliminates private insurance companies.

“Single payer is affordable, and the expanded coverage is paid for by administrative cost savings and progressive taxes,” he said. “Health care spending is contained by eliminating administrative costs—both purchasing and global budget.”

In his conclusion, Valdez said that the frequent claims that a single-payer system would lead to rationing and result in long wait times are unfounded: Wait times, he said, are a function of a system’s capacity to manage patient flow, and the United States spends enough on health care to ensure that wait times would not necessarily increase should a single-payer system be implemented.

On the negative side, Nicholas Wong, MCAS ’20, pointed out that large portions of the uninsured population today are made up of young people, who he argued don’t actually need insurance, or poor people who lack insurance because their states refuse to expand Medicaid.

Wong also refuted an earlier claim Valdez made—that health care costs under the current system will harm American consumers and businesses—by saying that health care spending is decreasing and that new technology would prevent runaway health care costs. On the other hand, he argued, single payer would increase health care costs by eliminating the cost-sharing provision of Medicare, expanding coverage to everybody, and covering new types of care.

“Either single payer will cause the deficit to explode, or it’s going to require massive tax increases,” he said.

Finally, Wong cited observations by Sally Pipes of the Pacific Research Institute—who has noted that current instances of government-run health care that such systems have lead to shortages, overspending, waste, budget battles, and a lack of innovation.

Back on the affirmative side, Conner Coles, MCAS ’20, argued that single payer is the best tool at the country’s disposal to deal with runaway debts, inflation, and the United States’ inability to meet its financial obligations.

“Converting our health care system to single payer is not only the smart thing to do, but it is a moral obligation,” he said. “America’s very founding guarantees a right to life and the pursuit of happiness, but far too many are having those rights denied to them because of a lack of insurance, or them being underinsured.”

Coles pointed out that regardless of age, all people face unexpected illnesses, get into automobile accidents, and need to have checkups with their doctors—refuting Wong’s point about young people not requiring health insurance. He pointed out that single payer would encourage these young people to no longer postpone avoid getting care on account of the cost.

Responding to Wong’s claim that health care costs are dropping, Coles pointed out that spending on federal health care programs is set to double by the end of the decade, according to the Congressional Budget Office. He also noted that people who own both large and small businesses agree that the costs of providing health insurance are holding them back from investing in their companies, innovating, doing research and development, and increasing their employees’ wages.

The final debater to present his argument, Ben Dewhurst, MCAS ’21, of the negative team, contended that the high expenses associated with a single-payer system would be devastating to the U.S. economy. The evidence that single payer would lead to increases in taxes and deficit spending is unrefuted, he argued, and tax increases spread out over the next couple of decades would clearly be less risky than one giant tax hike now.

“Even if there is a chance that the economy is going to collapse due to the state of the health care industry, that can only become more likely in the world of single payer,” he said.

Dewhurst pointed out that the long wait times under the single-payer system in Canada—the median time to see a specialist being more than 20 weeks—have led to tens of thousands of deaths in the country. This figure, he argued, would be much grislier if single payer was implemented in the United States, which has roughly 10 times the population.

As he closed his speech, Dewhurst brought up a new point: As a single-payer system would allow governments to negotiate low prices that would slash drug and medical device profits, these company’s ability to invest in research would be greatly hindered, stifling the creation of new medicine.

After making their arguments, each debater was given another chance to refute the opposing side, and the group then answered questions from the audience while the judges decided on a victor. In the end, the judges voted in a 2-1 decision for the affirmative team, awarded the second place Gargan Medal to Dewhurst, and gave the first place Fulton Medal—along with the spot on the Fulton Room wall—to Valdez. 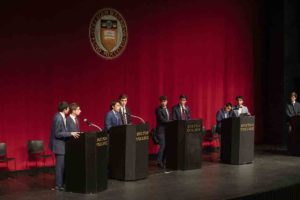