Home » Where Does Rubinoff Come From?
Opinions, Column

Where Does Rubinoff Come From?

In my column two weeks ago, I told you that I would dedicate more time to my investigations as soon as I finished my thesis. I had forgotten, however, about a far more pressing problem: my search for employment, which continues to this day because I chose to major in Islamic studies. My hope that Mattress Firm would employ me as a spokesman after my two–part investigation of whether its name is a pun, meanwhile, has yet to come to fruition. I have thus taken the drastic step of outsourcing this week’s investigation: where does Rubinoff vodka come from?

To be fair, I didn’t even come up with the idea. That honor belongs to Mysterious Friend A (MFA)—of no relation to the other MFA, the Museum of Fine Arts, which I actually count as Mysterious Friend B—who pondered why Rubinoff, or “Rubi” as it is colloquially known, is only a phenomenon in Massachusetts and surrounding areas. If, God forbid, you have friends outside New England, they will never have heard of this brand of vodka and will likely assume that you’re talking about David Rubinoff, the Belarusian violinist. It is unclear whether Rubinoff ever drank Rubinoff.

“How much Rubi is sold?” MFA texted me. “Where is it distilled? Any new potential flavors? What’s the most popular flavor?”

Most of these questions remain unanswered. She did discover, however, Rubi’s opaque ownership—a question that should consume us all, much as the stench of Rubi consumes Boston College on Tuesday, Thursday, Friday, and Saturday evenings.

As MFA would learn from some extensive Googling—the same way I had solved another Russian conspiracy, the Russian math schools—two alcohol-hawking businesses sell products under the name Rubinoff: Luxco, which has facilities in Missouri (ew) and Ohio, and M. S. Walker, which owns properties in Massachusetts, New Hampshire, New York, and Rhode Island.

On its head, this mystery would appear to have a pretty simple solution: M. S. Walker, unlike Luxco, operates in New England, so it likely distributes Rubi: the alcohol whose taste is hated but whose affordability is loved. Both companies, however, have copyrighted the name Rubinoff: Luxco says so with that stupid little ® symbol right on its website, M. S. Walker did the same in this very confusing legal website claiming that, apparently, Luxco already owned the trademark, but both companies can use it “concurrently.” Interestly, M. S. Walker promises not to sell Rubi in Missouri.

But there’s more! According to M. S. Walker’s website, the purveyor of alcohol sources its Rubi from “the Midwest,” Luxco’s home turf.

Did I need to list every single flavor of Rubi? Not technically, but I do have to meet my word count for this article that, like most of my others, is a day late. I don’t know why The Heights hasn’t fired me yet, considering that I roast it constantly. Probably incompetence.

Anyway, here’s my theory of what goes down before Rubi ends up in one of your desk drawers (where you hide it from your RA). First, out in the Midwest, Luxco does whatever has to happen to make that repugnant vodka exist. Maybe it harvests the creatures of the swamps or something—I don’t know. Then, as M. S. Walker states, “the spirits are shipped to the Northeast where they are further refined and blended with water from the Quabbin Reservoir—noted nationally as one of the cleanest and pure watersheds in the continental United States.” The reservoir even has its own shitty website.

I emailed Luxco but never received a response. I didn’t even bother with M. S. Walker because some people are good investigative journalists and some are college students, but none are both.

Does this solve the mystery of where Rubi comes from? Not entirely, but mostly. Could I actually solve the mystery? Probably. Will I? No. Did MFA basically do all the work for this article? Without a doubt. Why do I keep asking myself rhetorical questions in this annoying fashion? Word count. 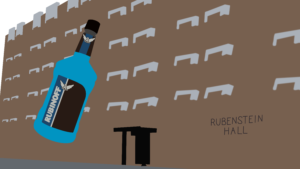