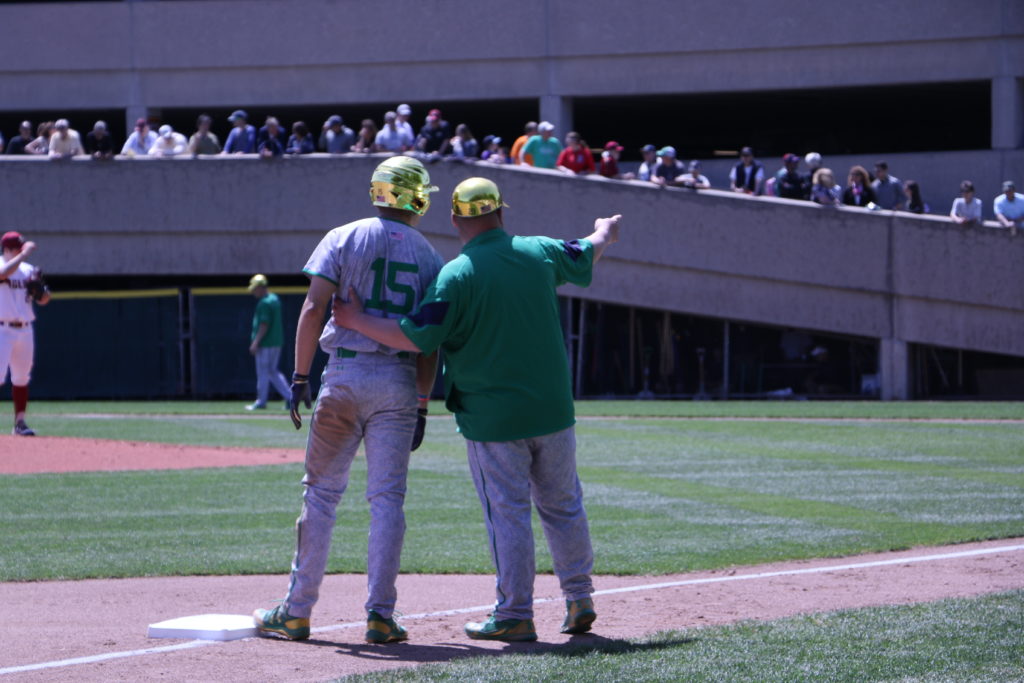 After a much-needed win on Tuesday against Massachusetts Lowell, Boston College baseball (14-26, 5-16 Atlantic Coast) will travel to South Bend, Ind. to play one of its biggest rivals—Notre Dame (18-23, 8-13). The matchup marks the Eagles’ first road series in April. With the season winding down, the ACC Tournament is looming. BC needs to win two out of three, not only to claim the Holy War, but also to keep its postseason hopes alive.

The game will be broadcast on ACC Network Extra and streamed via the WatchESPN app.

1) Jake Palomaki and Joe Suozzi were on top of their game this past Tuesday against UMass Lowell. Palomaki tied a career-high with four RBIs and also had two hits, a run, and a stolen base. Joe Suozzi recorded a career-best two RBIs, going 2-for-4. Suozzi has been on fire in his last five games, logging eight hits, six runs, and four RBIs during that span.

2) On Tuesday, the Eagles tallied 12 hits, marking the 20th time this season that they have recorded 10 or more in a single game. Even more impressive, eight of their nine starters logged at least one hit.

3) BC’s bullpen has drastically improved over the course of the season. And on Tuesday, Sean Hughes and John Witkowski teamed up to pitch three innings of scoreless relief to finish off the River Hawks. They both struck out a pair of batters and only gave up a combined two hits.

2) Senior outfielder Jake Johnson is currently on a five-game hitting streak and a 14-game on-base streak—one in which he is batting .373, with 11 walks, seven runs, and six RBIs. Similarly, Matt Vierling recently upped his hitting streak, batting an average of .406 in the last eight games, totaling six runs, one double, a home run, and six RBIs in the process.

3) Pitcher Tommy Sheehan was player of the game against Valparaiso—he turned in six innings of work, holding the Crusaders to just one run on four hits with four strikeouts. This game was his third quality outing of the 2018 season.

Notre Dame leads the all-time series, 30-14. The two teams’ last met on May 20, 2017, when the Eagles closed out the regular season with an 8-7 victory, sneaking into their second-consecutive ACC Tournament. Even after Rapp conceded seven runs in the opening four innings, Gian Martellini—who recorded two hits and scored a pair of runs—guided a resilient BC offense to a nail-biting win and another postseason appearance.

BC took care of business on Tuesday—whether or not head coach Mike Gambino’s team can beat Notre Dame is the real test, though. Fortunately for the Eagles, their lineup is finally producing again, in large part thanks to Palomaki, Chris Galland, and Suozzi. That said, as a team, the Irish are very strong offensively themselves. In fact, they have five players batting over .300. Quite simply, if BC is to have a chance, it’ll need to keep the Notre Dame bats in check.