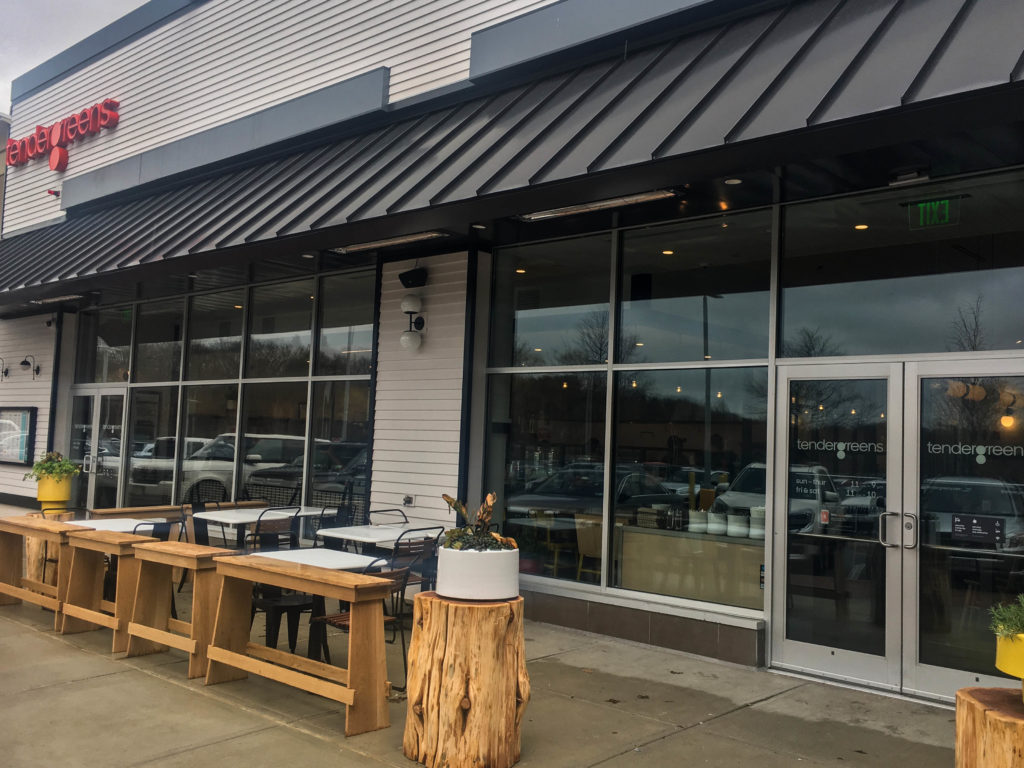 It has only been there for three weeks, but you would never know that Tender Greens is new to The Street in Chestnut Hill. With nearly 30 locations, the California-based company is new to the East Coast, having just opened in New York a few months ago. The restaurant has a base menu that is basically the same for all locations, although there are some minor differences between the east and west coasts because of the different products available in these regions.

Every day, each restaurant serves two unique specials, designed by its executive chef, that can be anything the chef wants. Todd Renner, the executive chef at Chestnut Hill and regional chef for the East Coast, enjoys creating dishes inspired by southern Italy, having studied regional Italian cuisine. Coming from San Diego, he also takes significant influence from Mexican cuisine that he grew up around.

Tender Greens encourages its kitchen staff to improve their skills and learn new ones regardless of what position they start out from. Chefs often rise through the ranks, perfecting one skill before they advance to a higher position. As the company continues to grow, classically-trained chefs are often pursued by a recruiting team to teach the foundations that their staff needs to learn.

Even now, as the regional chef, Renner doesn’t find himself out of the kitchen any more than he would otherwise be if he were only the executive chef. He might not be the one directly putting the dishes together, but he’s often in the kitchen teaching his chefs proper technique so that they can grow and advance through the ranks to get to wherever they want to be. The goal is for every kitchen to be thoughtful, attentive to detail, and “ultra-supportive”, according to Renner.

“I’m just as passionate about teaching as I am about cooking, and they’re symbiotic is so many ways,” Renner said. “It’s just awesome and different, and I’m happy to do both.”

As a kid, Renner wanted to be a restaurateur, which he still hopes to be some time in the future. Having worked as a pastry chef and an executive chef at a few restaurants, he has now stepped into a regional position for Tender Greens. Four years ago, Renner was a chef at a gastropub in San Diego. The restaurant outsourced its salami from a company whose owner was also the regional chef for Tender Greens in San Diego at that time. An opportunity arose at a Tender Greens, and one thing led to another: Renner became the executive chef for the San Diego kitchen. A year and a half later, he was relocated to San Francisco, and six weeks ago found himself in Boston as the new regional chef.

Although moving from California to Boston could be an astronomical shift in anyone’s life, Renner is thrilled to be on the East Coast. Not only has this position allowed him to advance in the ranks of the company, but, as a regional chef in a new area, he embraces the challenge to market a company largely unknown to the region as an opportunity to prove himself capable of succeeding in such a high managerial position.

Until very recently, Tender Greens restaurants were only in California: Two months ago, their first location on the East Coast opened in New York. Now, with the additional Chestnut Hill location up and running and one in downtown Boston in the works, the company is expanding quickly. Renner won’t just be supervising the operations of previously established restaurants, but he’ll also be overseeing the launches of various restaurants in the area, such as the Chestnut Hill and downtown Boston locations.

Visitors to The Street in Chestnut Hill have quickly taken a liking to Tender Greens—the restaurant has already gained regular visitors and positive feedback from the community. Considering the other businesses around—including LuluLemon, Barry’s Bootcamp, and Legal Seafood—The Street is a fitting place for the restaurant to be located.

Many of these companies have partnered with Tender Greens in the past, due to each drawing similar customers and values. Most of these businesses take pride in providing trendy and fresh products for their customers—from athletic apparel, to trendy workouts, to local ingredients—Tender Greens is no different. Although it does have to outsource a lot of their ingredients from warmer regions during the winter, it relies on many local producers to provide only the freshest ingredients for their dishes. For such a casual restaurant, the kitchen uses these exceptionally fresh elements are presented very elegantly. The most popular dishes so far have been the steak plate and the chipotle chicken salad.

Compared to the downtown locations at which Renner has previously worked, the crowd in Chestnut Hill is different, which contributes to this location’s individuality. While downtown San Francisco and San Diego both experienced a diverse influx of customers—most of whom desired a quick meal during their lunch breaks—Chestnut Hill brings forth many families, students, and shoppers who aren’t opposed to sticking around the restaurant for a bit after they finish eating.

Todd explained the unique atmospheres that really come through at each individual restaurant by zooming in on the variety just within the San Francisco area: Palo Alto caters to a young college-aged crowd, the downtown location next to the tech industries calls for a quick and casual lunch destination, and the Tender Greens down the block from AT&T Park has adopted a comfortable atmosphere appropriate for a restaurant so near a ballpark.

In order to encourage its customers to linger and enjoy the food at Tender Greens, the Chestnut Hill location has uniquely implemented the use of trackers in their service. The customers don’t have to worry: Their dishes will be brought to their tables. The chefs have truly been utilizing their large kitchen space as they fine-tune the menu items in these opening weeks.

“[This] is fun for me,” Renner said. “From a chef’s perspective, it only means that they can enjoy things more and really get to geek out on what we do here.”

Tender Greens casual dining The Street in Chestnut Hill
The Importance of Adopting a Hobby
From the Sacred to the Secular, Relics Shape the Gardner Museum