Home » The Power of Apology 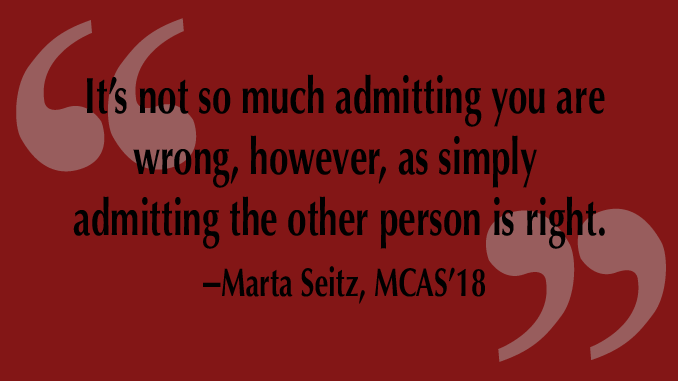 The Power of Apology

I grew up with three siblings. We’re close in age, so growing up we spent a lot of time playing together … and a lot of time fighting together, too. If you were anything like me as a kid, you could find a way to generate a sibling brawl from just about anything: Everything from disproportionate dessert portions to unequal chore assignments. As you grew older, you likely graduated to much graver matters, such as rights to the car on Friday night or stolen clothing from your sisters. And if you weren’t feeling particularly creative, you could usually resort to simply calling your sibling some nasty name that warranted an inauthentic apology that you resentfully delivered and your parents forcefully imposed. If you were smart like my brother, you would feign just enough sincerity to evade your parents’ wrath. If you were stubborn like me, you thought that your refusal to apologize was somehow a valiant demonstration of your determination and loyalty to your values.

Finally, after years of experience in the art of argumentation and sibling rivalry, I have changed my stance on the situation, and my philosophy is this: Always apologize. When I tell people this, they tend to disagree. Some of my friends—like my younger self—think that saying you’re sorry suggests that you’re admitting that you were wrong. It’s not so much admitting you are wrong, however, as simply admitting the other person is right.

Sounds like the same thing … equally self-defeating, right? Not necessarily. You can still disagree with the other person. You can still stand by the intent of your actions and beliefs. You are not suggesting that they are right at the expense of your own validity, you are simply expressing regret that the unintended consequence of your actions resulted in hurting the other person. The distinction seems nit-picky and nuanced at first, I know, but while settling a dispute between my sister and me, my mom once told me, “When someone tells you that you hurt them, you don’t get to decide that you didn’t.” In other words, everyone is entitled to their own feelings whether you think they are justified or not. Whether or not you meant to upset them, they are right: you did. I spent my entire childhood rationalizing and defending why my actions shouldn’t have hurt my siblings, but what did they care? The bottom line was that they were hurt. My sister never wanted a detailed explanation of my intentions, nor did my brother want some carefully articulated reasoning to trump the validity of his feelings—they just wanted a simple apology.

Still, a lot of my friends have countered by saying that apologizing when you don’t truly mean it seems inauthentic. If you are going to be disingenuous, isn’t a fake apology worse than no apology at all? To that, I would argue that the only person who has the power to change the sincerity of your apology is yourself. So challenge yourself a little. Do not just restrict yourself to only apologizing when you mean it. Instead, decide to apologize every time you should, and mean it when you do. It’s a lot easier said than done, but be willing to put your ego aside and realize that apologizing doesn’t mean betraying your beliefs to appease the other person. It just means that you acknowledge and validate the other person’s feelings. By simply reframing your way of thinking, sincerity comes a lot more naturally.

Perhaps I still haven’t convinced you—and that’s okay. But I will leave you with two final recommendations before you give up on me completely: