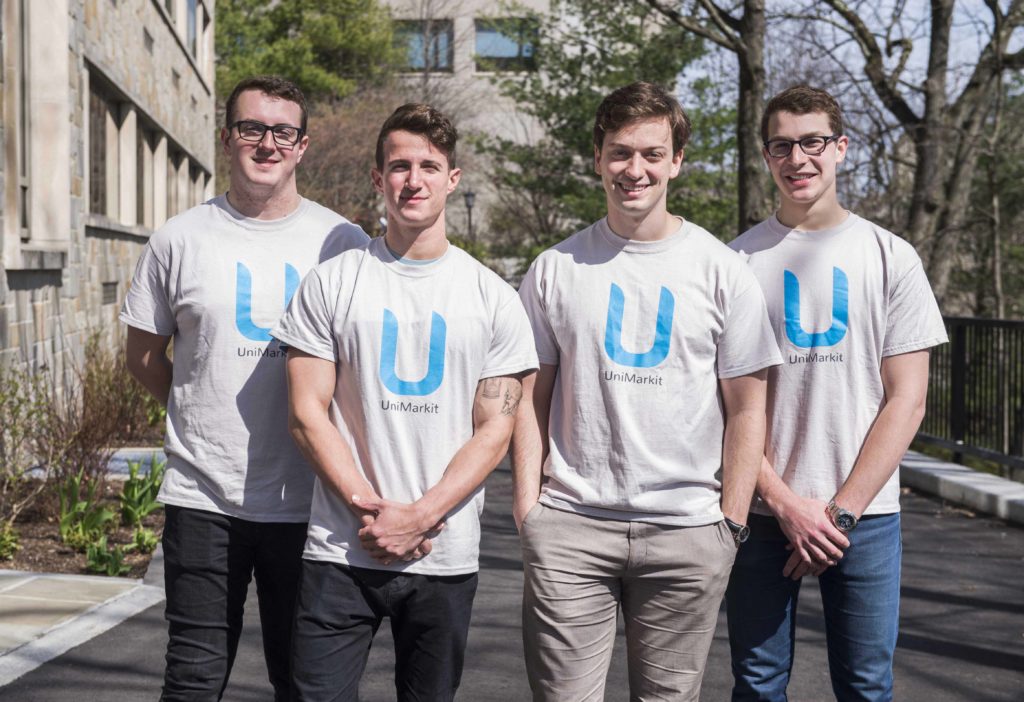 Upon moving into his off-campus apartment at the start of his junior year, Mark Dimeglio, CSOM ’18, realized he needed a dresser. After checking Target and IKEA and deciding it would be too expensive to buy new, Dimeglio scrolled through countless expired furniture listings on Facebook before finally finding a senior with an extra dresser in his Mod.

Dimeglio bought the dresser, but his problem was far from over. He needed to get it from the Mods to his apartment near 2000 Commonwealth Ave. He dragged it to St. Thomas Moore Road, but with chafing red marks on his arms from the hardwood furniture, Dimeglio couldn’t go much further.

He called an Uber XL, and upon arrival, his driver gave him a dirty look before helping him lug the dresser into the trunk. Dimeglio got the furniture into his apartment and that night, pondered the stressful situation he had undergone.

“I thought about it and realized, ‘This is a problem that so many college kids are having,’” he said.

And so, UniMarkit was born: an app that serves as an online marketplace for college students looking to safely buy and sell just about anything—ranging from furniture, to fan gear, to possibly even parking spots for the day.

“I’m an information systems student, I like to build things in my free time and learn about tech and I said, ‘you know what, this is something I’m really passionate about and I’m just going to solve the problem myself’,” Dimeglio said.

“To use our app, you need to have a bc.edu address to use it. Second, to be able to even buy, sell, or make an offer, you’ll have to actually verify your email,” Dimeglio said. “We’re trying to keep it as secure as possible and we want people to trust the platform, and also trust other users on it.”

Dimeglio hopes the app will solve problems for new kids who perhaps don’t know too many people who would have extra items for sale.

“There’s so much stuff circulating around campus but your ability to get stuff is really only as strong as your social connections, especially if you’re a freshman or sophomore,” Dimeglio said. “It’d be a lot easier if you could pay a little bit of money and use an app to find something you need in a pinch, when you don’t have a lot of money.”

Although the company is starting at BC, the team plans to bring the app to the West Coast. Joe Taveras, MCAS ’18, is in charge of marketing the app and thinks the demand for such a service goes beyond Chestnut Hill.

“There’s something similar out in California but they don’t take extra steps to verify people on the platform are actually people within a university community,” Taveras said.

Taveras studies psychology—particularly how it relates to marketing. He first entered the industry through a summer job at Tinder, where he researched how customers around the world used the app and then designed strategies to more productively maneuver marketing strategies.

Dimeglio loves working with tech, but writing the code for the app was far from easy.

“Every line of code I wrote was the first time I’d ever written that kind of code … You have to be okay with saying ‘I don’t know but I’m going to figure it out,’” he said.

After designing the prototype of the app, Dimeglio recruited two friends, Teddy Burns, CSOM ’18, and Zach Wilner, CSOM ’18, for help with the tech side of the project. (Wilner is a former general manager of The Heights.)

The four-man team shares responsibilities and makes certain to give each other endless creative freedom.

“I think to be passionate about what you’re doing, everyone has to have autonomy. I’ve heard stories about failed startups where there’s a founder who was super possessive of the business they’re in control of,” Dimeglio said. “I think everyone works well on our team because everyone has been given a substantial amount of responsibility and I think it allows them to be passionate about what they’re doing.”

UniMarkit also hopes to solve some financial concerns of college students. A few months back, the team invited friends to a party at 2150 Comm. Ave., but realized they didn’t have any speakers. They considered either borrowing ones from friends or buying new ones from Best Buy and then maybe returning them the next day. This led them to the idea of single-use sales.

“We’ve talked about making it possible to request items that people need even if it’s just once,” Dimeglio said. “We’ve also thought about the ability to share parking spots, or being able to rent your car out for the day.”

The team has considered different ways to make money off the app, but given the recent controversies surrounding Facebook, they want to avoid selling users’ information or using it to custom tailor advertisements to specific tastes.

“Right now, we need to first to deliver the experience that kids need, so right now I’m taking a loss on it,” Dimeglio said. “We’re trying to prove to people and maybe even potential investors that this is something that should have happened a long time ago and it’s going to happen now.”