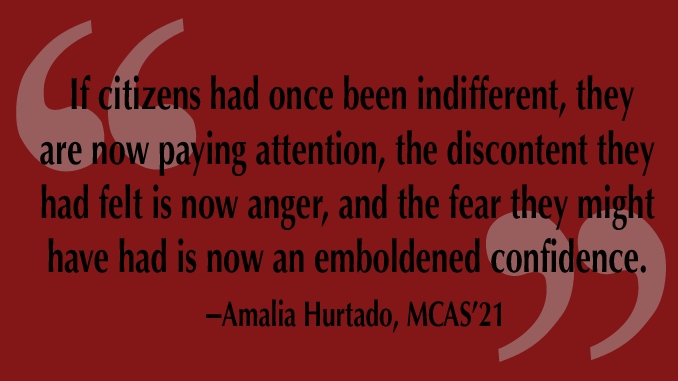 They are rubber bullets, is what the university students thought until one of their classmates fell to the ground, dead. “He has no pulse, we have to move!” yelled a young man wearing a dirty surgical mask. Hordes of curious youths suddenly stopped protesting and surrounded the corpse of Erick Cubillo Solis. Some of them began to scream, others began to cry, battling between taking Solis to a hospital or giving him CPR. The sound of more gunshots put an end to their indecision, however, and they quickly carried their schoolmate from the university grounds onto a gurney, improvised from metal rods and a plycem board.

Erick Cubillo Solis is one of the 63 Nicaraguans who has been killed at the hands of an authoritarian government attempting to suppress the country’s right to freedom.

On Monday, April 16, 2018, President Daniel Ortega announced increases in social security taxes and cuts in pension benefits, established to fund a deficit that he and his government created through illegal and unconstitutional proceedings. Within a day, Nicaraguans, the most fervent and impassioned being students and young adults, poured into the streets to protest against the injustices. Their screams for justice were met with violent repression, yet they were not silenced.

This rebellion has been the largest countrywide civil outburst Ortega has faced during his three consecutive terms as president. Security forces deployed by his government were responsible for the beating, imprisoning, kidnapping and killing of over 60 Nicaraguan civilians, many of whom were young adults and students. This brutality and oppression against the peaceful protesters further ignited an insurrection that shook Ortega’s regime to the core.

These were the words that echoed in the minds of every student, either far from home or close enough to hear the gunshots. “They have taken away so much from us. They even took our fear,” screamed by mothers whose children were murdered. These were the words that had enough power to challenge an authoritarian president and set a new tone for a nation that has lost all fears.

The severity of the social unrest led Ortega to cancel the social security reforms. The damage, however, had been done. If citizens had once been indifferent, they are now paying attention, the discontent they had felt is now anger, and the fear they might have had is now an emboldened confidence.

The student’s passion for their country and their will to fight for their rights inspired their mothers, their neighbors, and Nicaragua as a whole to question Ortega’s inhumanity and put a stop to it.

We millennials are constantly called to action, and sometimes fail to oblige. However,Erick Cubillo Solis and dozens of other Nicaraguan youth are telling a different story: One where they fight to death for an issue they care about, for people they love, and for the country dearest to their hearts.