The Districts, an indie band from Philadelphia, filled the Brighton Music Hall with the sound of rock riffs and pulsing drum beats on May 2. Signed to Fat Possum Records, the same label that produced The Black Keys albums Thickfreakness and Rubber Factory, the group brought a rowdy garage rock sound to the packed venue.

Laser Background, a fellow Philly band, was the first opening act to take the stage. The band played calm music with long, indistinguishable notes under the foggy purple light. The eccentric frontman perched behind a lit-up globe sat atop his keyboard while using a synthesizer to make funky beats for the irreverent songs.

Horse Jumper of Love upped the energy with hard rock jams featuring wailing guitar and deep basslines. The lanky lead singer looked into the crowd with squinted eyes while delivering the sparse lyrics. The band’s sound was similar to that of Nirvana as the vocalist weaved in and out of barely whispered verses and loud, rambunctious choruses.

The Districts opened their set with “If Before I Wake,” a song with long, wave like guitar riffs during the chorus. The sea of plaid flannels rocked back and forth as Rob Grote, the lead vocalist and a guitarist, jumped around the stage, making dramatic gestures before each drop into the chorus.

The band followed with “Nighttime Girls,” one of its recently released singles. The fast beat lent itself to a jam sesh between the members, allowing the energetic crowd to bounce up and down as the guitarist, Pat Cassidy, worked his way through the intricate notes. “Violet” kept the energy high, with a quick paced kick drum beat and the simple repeated line “Violet, you’re mine.”

The energy from the previous two songs built up to an explosive performance of “Chlorine,” a song that opens with a booming guitar and drum instrumental. The Districts created a perfect balance of quiet verses and vibrant instrumental breaks while building up to a final instrumental featuring a screaming guitar solo that broke to near silence for the final line of the song. During the song, one fan threw a t-shirt on the stage that the acoustic guitarist wrapped around his head for its duration.

The crowd settled down for the band to perform an unknown new song. Like many of the band’s other songs, the song balanced delicate lyrics with loud beats. Grote, however, stepped out of his comfort zone to provide especially vulnerable soft delivery for the intro of the song.

Following first exposure with familiarity, the Districts played fan favorite “4th and Roebling,” a song with well over five million plays on Spotify. Crowd members screamed while drummer Braden Lawrence started the quiet beat, and fans sang along to the chorus while bobbing around to the dynamic track. The band continued with another track from its 2015 album A Flourish and a Spoil and performed “Bold” next. Grote yelled lyrics into the mic with distinguished intensity, feeding off of the dedicated fans’ passionate response.

Fans immediately recognized “Salt,” a Popular Manipulations track from the opening guitar chords and sang along to the bitter-sweet first lines, “A little birdie with a broken wing / Why does it taste like salt?” The Districts followed the hit with another new song. This time, fans listened intently to the lyrics, swaying along to the unfamiliar beat.

Acoustic guitar chords and the line “Fat kiddo on the ground again / Dirt might stain you sometime” opened the next track, “Fat Kiddo.” Wavering synthetic noises swirled around the room as the band played through the grim song. Dedicated fans yelled the lyric “South Jersey baby” along with Grote before the vocalist howled the repeated phrase “Blue afternoon.”

Continuing to pull from the Popular Manipulations tracklist, The Districts followed the blue ballad with the hard rock kit “Ordinary Day.” A friend of the band emerged from backstage to stage dive while the band played the grunge riffs and hard-hitting drum beat. The band played one final new song with a fast drum beat and heavy guitar riff before ending the set with “Young Blood,” a building song that opens with ticking drum and mingling guitar chords. Grote played a rousing guitar solo during the song, erratically romping around on the ground as he plucked the strings.

The crowd demanded an encore, however, and stuck around until Grote returned to the stage to perform an unknown solo song. The singer stood alone under the pink light, strumming an electric guitar to produce raw, vulnerable sounds to accompany his soft vocal.

Grote’s fellow band members joined him on the stage for a final song, “Long Distance,” from their 2013 debut album Telephone. Cassidy provided long, airy guitar riffs during the song before the band broke into an extended instrumental toward the song’s finish. Grote faced bassist Connor Jacobus, each losing themselves in the music. The crowd echoed Grote’s line “Long distance / Slow time” with the response “Is it easier?” during the chorus. The Districts played off of the crowd’s immense energy during the final song—Cassidy and the band’s guest acoustic guitarist dove into a sea of adoring fans at the end of the song. 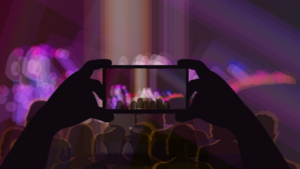