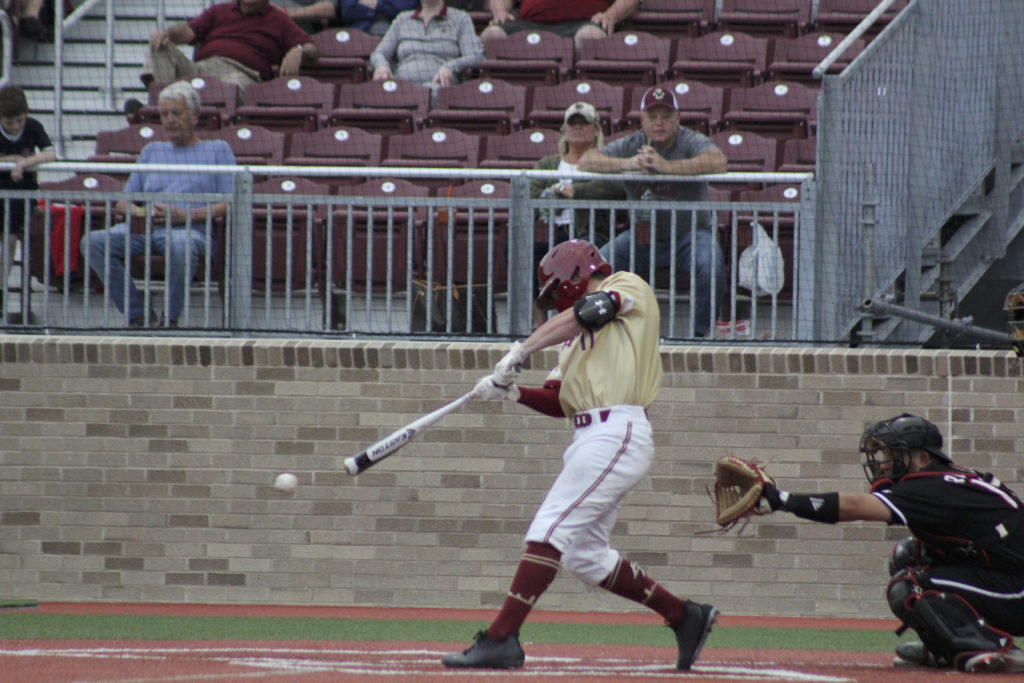 Boston College baseball is on the verge of missing the ACC Tournament for the first time in three years. After winning five of their first 10 games, the Eagles have struggled to put two and two together, losing all but one of their conference series. Occasionally, though, head coach Mike Gambino’s team looks just as good as the ACC’s best. It was only fitting that Sunday—a day dedicated to BC’s seven seniors—was one of those games.

In his last career start at home, Brian Rapp went seven innings, allowing just four hits and one run—a masterful performance, especially considering that Louisville plated a combined 17 in the first two acts of the three-game set. With the game tied at one apiece in the eighth, Brian Dempsey logged the last of his three hits—a single up the middle that brought Jack Cunningham home for the game-winning run. Thomas Lane recorded the win, a 2-1 decision, spoiling the Cardinals’ potential sweep.

Rapp was wheeling and dealing from the minute he stepped on the mound. In fact, the Mendham, N.J. native fanned two of the first three batters he faced. When all was said and done, Rapp tallied five strikeouts on the day, upping his career total to 178—a mark that ranks 10th on BC’s (16-30, 7-20 Atlantic Coast) all-time list.

The Eagles threatened in the bottom of the first, in large part thanks to Jake Palomaki. After going down 0-2, the senior ripped a single to right field. Moments later, he stole second. Now in scoring position, Palomaki watched as teammate Chris Galland drew a six-pitch walk. The freshman wasn’t as fortunate on the basepaths: While executing a double steal, Galland—who had only been thrown out once all year—was tagged out. Luckily for Gambino, the aggressive baserunning wasn’t all for nothing, as Palomaki reached third safely on the play. It wouldn’t matter, though. Louisville (32-15, 12-12) pitcher Bobby Miller got Gian Martellini looking to end the frame.

BC had to wait a couple more innings to get on the board. This time, Dante Baldelli was the catalyst. The sophomore booked a free pass to first after working a full count. He’d be on the move in a matter of minutes. Batting in the two-spot, Galland doubled down the left field line, advancing Baldelli to third. From there, all Cunningham really had to do to score his center fielder was to put the ball in play. A grounder to second did the job.

It wasn’t long before Miller regained his focus. The Cardinals pitcher, who is posting the sixth-best earned run average in the ACC this season, conceded just two hits over the course of the ensuing four frames. Dempsey, Baldelli, and Palomaki were able to get on base. The rest of the Eagles lineup, on the other hand, was practically helpless.

Rapp’s shutout came to an end in the top of the fifth. Right off the bat, the right-hander issued a walk to Zach Britton. Then, Jake Snider laid down a perfectly-placed bunt, both reaching first and moving Britton into scoring position. Courtesy of a balk, the runners trotted one base over. With two men on, Devin Mann grounded out to shortstop. Palomaki got the force at first, but Britton sped home in the process, knotting the game up at one. Despite committing another balk, Rapp eventually escaped the jam with a timely punchout.

All in all, the inning was nothing more than a hiccup for the senior. Rapp strung together back-to-back one-two-three frames to wrap up his outing. He wouldn’t end up receiving the win, but the way he was pitching made it quite clear that he was deserving of the decision. That distinction was left to Lane, who benefited from an inspired eighth inning.

As soon as Louisville head coach Dan McDonnell made the switch at pitcher to insert Bryan Hoeing, the Eagles’ bats came alive again—so much so that BC tallied four hits in the frame, practically doubling its game total. Galland wasted no time, taking the first pitch he saw to left center for a leadoff single. Attempting to push the freshman over, Cunningham bunted, but Galland got a little too greedy and rounded second. The speedy outfielder was tagged out on his way to third. Martellini made up for the baserunning blunder with a single through the left side. The next batter, Scott Braren, reached on a fielder’s choice at the expense of Martellini. Still, with runners on the corners, all Dempsey needed was a single to score the go-ahead-run. That’s exactly what he delivered.

Before walking Britton, Lane induced a flyout and a groundout. Lucas Dunn entered the game as a pinch-runner, but the substitution backfired when the freshman was thrown out by Martellini on his way to second, an appropriate ending to a defensive-minded game.

Even with the victory—BC’s second in ACC play since April 8—the Eagles will have to run the table to reach the 20-win mark. For a senior class that has never lost more than 28 games in a season, 2018 will hardly be a year to remember. But games like Sunday’s serve as reminder that when BC plays at its best, it can compete with anyone in the conference. That’s something that these seniors will never forget.