Home » Luck Advocates for Africa with the ONE Campaign
Features

Luck Advocates for Africa with the ONE Campaign

Many students on the brink of the adult world—if they were speaking honestly—would argue that they simply do not have the time to fret over poverty or the spread of diseases in sub-saharan Africa. The pressure to find jobs and support themselves leaves little motivation to consider these seemingly faraway affairs. In contrast, Kyra Luck, MCAS ’18, believes considering this plight is crucial—everyone has the ability to make a difference in some way.

Luck has many qualities, such as her compassion at open-mindedness, that will well-equip her as a graduating senior preparing to enter the workforce and the adult world. While she is excited for the next chapter of her personal life, however, she continues to look beyond her individual needs.

There are some dire issues within the world which Luck believes urgently need to be addressed—specifically, she’s focused on advocating for legislation that address prevalent plights in sub-Saharan Africa.

That’s why she joined ONE, an organization that campaigns to ease the steadily-increasing poverty rate and the rapid spread of diseases such as AIDS and tuberculosis within the region.

Luck first learned about the ONE campaign and its mission the summer after her sophomore year. She was at a function making small talk with her father’s college roommate, Tom Hart, about “The Challenge of Justice,” a class she had taken for her international studies major.

Luck’s final paper explored how the U.S. subsidizes American farmers to grow rice and then ship it down to Haiti, undercutting the salary of Haitian farmers and forcing thousands of locals out of business.

“It just seemed to me like there was this whole oversight,” she said.

As the North American Executive Director of the ONE campaign, Hart expressed a similar sentiment. Previously, he had actively mobilized ONE to lobby for the Agricultural Act of 2014, also known as the “Farm Bill.” Passed in Feb. 2014, the legislation gave USAID more freedom in funding the Food for Peace program, which fulfills the need for nutrition in the world’s most impoverished communities.

“I thought it was absolutely amazing to hear how his organization had did that,” said Luck. “I started thinking about how I could do the same on campus.”

Though she did not know it at the time, that spontaneous conversation with Hart was the spark which would come to blaze a path, and open many doors, for Luck down the road.

During her time abroad in Switzerland in the fall of her junior year, Luck worked at the ONE campaign, completing paperwork and familiarizing herself with the organization’s mission.

Upon her return to BC, she quickly got involved with ONE campus, a subsection of the ONE campaign that encourages students to take action against extreme poverty. Though the group is not recognized as an official club on BC’s campus, many students are working to change this.

While Luck acknowledged that the existing international outreach clubs on campus do amazing work, she argued that students can and should be doing more in order to bring about lasting results.

“Instead of fixing the wound they are just putting patches on it,” she said. “I was disappointed that we cannot be recognized as an official club, but administration doesn’t want anything associated with lobbying.”

Mary Shriver, MCAS ’20, who interned with Luck at the ONE campaign last summer, strongly believes BC students would benefit from ONE’s status as a club on BC’s campus. To her, the ONE organization is not so much a lobbying campaign, but rather a group who seeks to inspire and educate people.

“It’s a civil duty to inform your representatives what you want to see in a budget or of what bills you would like to be passed,” said Shriver.

Though the BC administration has already rejected the group’s request for recognition as a club twice, Shriver and Luck remain determined.

Their unwavering dedication has not gone unnoticed. This past February, Luck was invited to attend an exclusive summit in Wash. D.C., where she discussed anti-poverty policies with her state’s elected leaders, including Senator Elizabeth Warren, Senator Ed Markey and Massachusetts representative Joe Kennedy.

Though she only knew a handful of people attending the ONE summit, Luck was ecstatic about the opportunity and quickly booked her flight to Capitol Hill. Upon arriving, she encountered approximately 200 new faces—they were either fellow students from all over the country or congressional representatives.

During a meeting with Warren and Markey’s staff, Luck advocated to increase the nation’s budget for foreign aid. The BUILD Act, currently a bill in the beginning stages of the legislative process, was proposed in order to both help American businesses expand overseas and to strengthen foreign economies. During Luck’s time on the Hill, it emerged as a central topic of conversation.

While Luck said many people at the summit supported and spoke on this act, it was Republican congressman Ted Yoho’s voice that stood out to her. Having originally been a strong opponent of the foreign aid budget, Yoho’s policy has changed radically since his involvement with the ONE campaign. It’s that quality of open-mindedness—the idea of expanding one’s own horizon and looking beyond one’s self—that Luck relates to and deeply embodies.

“People don’t realize that our foreign affairs budget is less than one percent of our total budget,” she said. “From that, about two-thirds is spent on security aid that we give to Afghanistan, which is good but it has nothing to do with the programs that ONE is interested in and that I think make such a difference in building up communities.”

Upon recognizing this, Yoho became one of ONE’s biggest advocates and has committed himself to creating legislation that will spur positive, impactful change.

In addition to the BUILD Act, Luck is passionate about the READ Act. Introduced by senator Marco Rubio in 2017, the bill aims to increase girls’ opportunities for education on a global scale. Rather than flying teachers out from the U.S., the ONE campaign focuses on sustainability and the training of local educators. The organization’s priority is on building up the communities from within and providing them with the skills and knowledge that will help them prosper.

Beyond that, Luck said the act will provide these African communities with increased infrastructure, so that, for example, young girls can focus on their education rather than walking five miles to retrieve water for their families.

“It’s not that there aren’t enough schools,” she said. “The boys can go to school. It’s more that the girls cannot because they are required to help their families. Part of the READ program that I really liked is the focus on building up infrastructure for running water and toilets, so that young girls have more time to focus on education and not just living.”

As students at BC, it’s easy to forget that somewhere in the world, a little girl is walking five miles, barefoot, for a bucket of water to quench her family’s thirst. We forget that an old man is fighting through AIDS alone, with no access to medical treatment. We forget that a young mother is ignoring the gnawing hunger pains in her stomach so that her child can eat a meal that day.

While most people are not consciously turning their back on such instances of human suffering, it is this act of forgetting, or this lack of social awareness, that Luck considers our greatest problem. To Luck, it’s the fact that people are overly-concerned with their own immediate needs and oblivious to the more urgent needs of people around the world.

“It’s so evident that policy makers respond to what their constituents want or would like,” she said. “I’m sure if we asked them to do more they would respond but because everyone is so interested in protecting their own interests, that’s what the policymakers are focused on and as a result, these issues get pushed to the side.”

As Luck prepares to receive her diploma and to begin a new chapter of her life, she leaves the BC community with a simple, yet utterly important message and that is that everyone—no matter who you are or where you come from in the world—has the power to make a difference and join the ONE campaign’s journey. 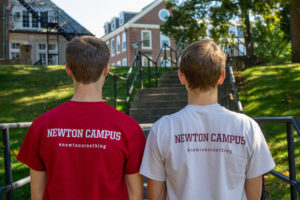 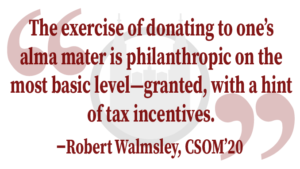