Home » Previewing 2018 Lacrosse: Second Round of NCAA Tournament Vs. Princeton 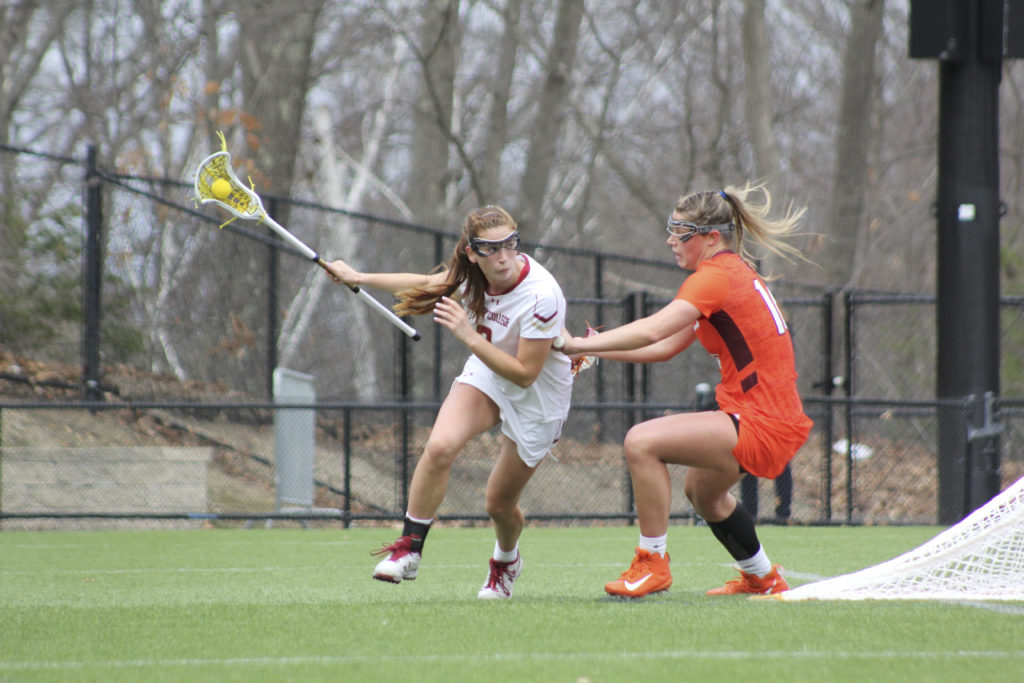 Previewing 2018 Lacrosse: Second Round of NCAA Tournament Vs. Princeton

In Boston College lacrosse’s last 25 games, the Eagles (19-1, 9-1 Atlantic Coast) have lost just twice. The first defeat came against Maryland in the 2017 National Championship game, the second just a week ago to North Carolina in the ACC Championship. With the impressive stretch behind it, BC now faces its biggest test—as the four seed in the NCAA Tournament with a Tewaaraton Award finalist and a prolific defense, the Eagles are looking for the program’s first championship. It starts with a home matchup against Princeton, which needed double overtime to escape Syracuse in the first round on Friday night.

The Tigers (13-5, 6-1 Ivy League) had a six-goal lead over the Orange in the first half, but a Syracuse rally in the latter portion of play made things interesting. Eventually, it was Massachusetts native Colby Chanenchuk who scored the overtime game-winner, sending the team to Chestnut Hill for the second round of the NCAA Tournament.

The game will be broadcasted on ESPN3 and available on WatchESPN.

1) Last time out, the Eagles were thoroughly outplayed by North Carolina—a frustrating foe—in the ACC Championship game. The Tar Heels fell behind by a goal early, but quickly erupted for a 9-2 first-half run, en route to a 14-11 victory. Unlike most opponents this season, UNC was able to pick apart BC’s defense, from start to finish.

2) The 11 goals followed back-to-back games in which the Eagles held Notre Dame and Louisville to a combined 13. BC’s offense has been incredible, but as head coach Acacia Walker-Weinstein has focused on time and time again, it starts with the defense.

3) Sam Apuzzo ranks third in the nation with 112 points, sitting in fourth with 79 goals. The junior was a Tewaaraton Award nominee a year ago, but has upped the ante this year—earlier this week she was named one of five finalists for the honor.

1) Tabbed as one of the hottest teams in the country entering the tournament, the Tigers have now rattled off seven wins in a row. The stretch started after a narrow one-goal loss to No. 2 Maryland, the defending champions, and included wins over ranked conference opponents, Yale and Penn.

2) As opposed to BC—a team that frequently leans on established stars—Princeton has watched youth flourish this season. The Tigers are led by freshman Kyla Sears, who entered tourney play with 78 points on 60 goals and 18 assists, while fellow first-year Marge Donovan leads the team with 64 draw controls.

3) Sears may rank 20th in the country in goals, but the Tigers have a very diverse offensive attack. Eight different players scored for Princeton in the matchup with Syracuse, while the roster has three players in double-digit assists on the year and four with 30 or more goals.

These two teams have never faced off. Princeton is one of just two of the eight Ivy League schools that the Eagles have never played, with the other being Columbia. BC took on Brown, Yale, and Dartmouth this season alone.

BC has had a great season, but risk a similar ending to what happened to women’s hockey this past season. The Eagles were firmly positioned at the top of the polls for much of the season, but dropped a conference semifinal to Connecticut, then bowed out in the first round of the NCAA Tournament to Ohio State. It’s an easy comparison, as BC was poised to win its first ACC Championship but instead fell to UNC. The Eagles don’t want the same fate in the second round of the NCAA Tournament against Princeton. With that being said, BC should find themselves in a shootout—the Tigers are two spots behind them in the ranking of the country’s top offenses—and it’ll come down to whether the defensive adjustments that the Eagles are so well known can slow down the Princeton attack. A BC win would likely mean a matchup against undefeated Stony Brook—which is facing Penn—in the Elite Eight.