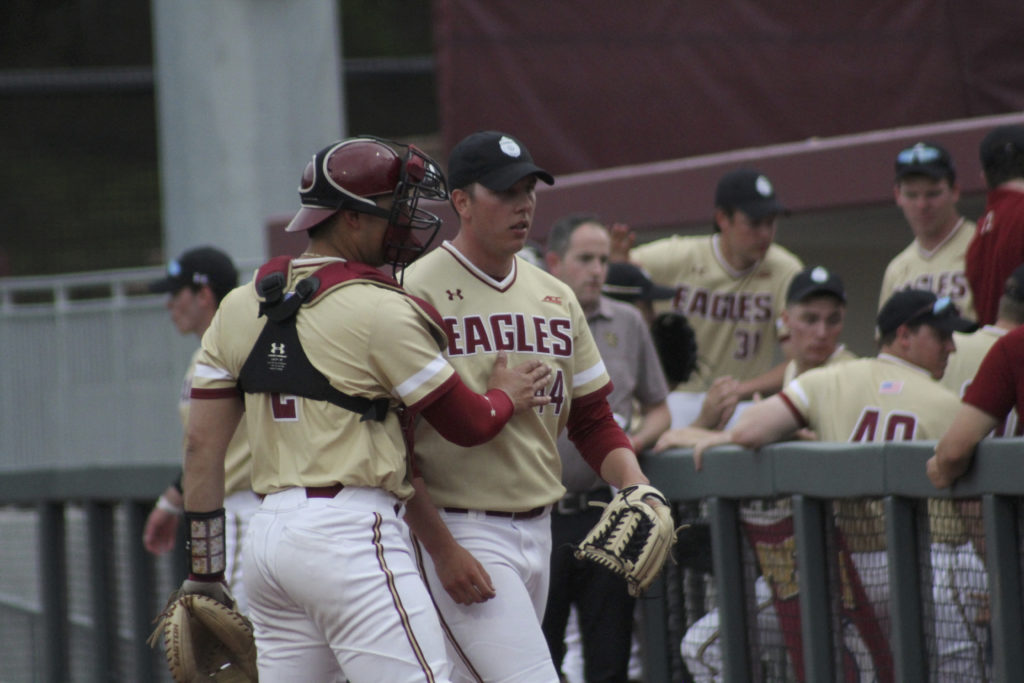 Boston College baseball entered its final weekend series of the year against Miami with at least some semblance of momentum, having won two straight—against Louisville and Maine—for the first time since early April.

Then, in fitting fashion, the Eagles watched a pair of pitching duels slip away from them before the finale was rained out midway through the third inning with BC leading, ending a disappointing season 15 games under .500. It handed head coach Mike Gambino his sixth losing season in eight years at the helm, while the 22 conference losses was the most since 2013.

Saturday’s season-ending rainout prevented the Eagles (17-31, 7-22 Atlantic Coast) from gaining any sort of satisfaction at the end of a tough year. BC dropped 12 of its final 14 conference games—the final two coming against a Hurricanes (27-25, 16-13) team that was wrapping up an uncharastically average campaign.

On Friday night, Eagles left-hander Dan Metzdorf pitched into the eighth inning, but allowed three runs in the sixth inning that would prove too much to overcome—especially because of the pitcher in the Miami jersey. Hurricanes right-hander Evan McKendry baffled BC hitters, striking out 11 in just under seven full innings while not allowing an earned run, and his offense lifted him to a 4-3 win.

McKendry was shaky early, allowing a run in each of the first two innings. Jake Palomaki singled to left on the first pitch of the game, moved to second after a failed pick-off attempt, then came around to score on a single from Brian Dempsey. Then, in the second, Joe Suozzi reached on a throwing error and eventually came in to score on a well-placed bunt from Jake Alu.

Up 2-0, Metzdorf took the mound after a double play helped him erase a single in the first and got ahead in the count on Miami slugger Danny Reyes, who posted a .327 batting average this season, albeit in just 25 games of action. The ensuing pitch was promptly deposited over the fence in center field for a solo shot.

Chances were few and far between for either team as the game progressed, but Miami’s starter was particularly adept at getting out of jams when he faced them. McKendry gave up a two-out double to Suozzi, but struck out Alu on three-straight pitches—all swinging strikes. In the fifth, McKendry found himself in trouble again—two runners were in scoring position with two outs—but he fanned Gian Martellini.

Metzdorf didn’t really face any issues until the sixth inning—a frame that dashed a chance at an impressive win. Willy Escala doubled to open the frame, and, after a sacrifice bunt, three-straight Hurricanes drove in a run: Tony Jenkins had a RBI single up the middle, Romy Gonzalez drove in another with a double, and Reyes capped the scoring with the eventual game-winning run via a groundout.

McKendry coasted into the seventh, but a poor defense behind him nearly cost him a well-deserved win. Palomaki drew a four-pitch walk to open the inning, swiped second, then sprinted to third when the throw skipped into the outfield. A Jack Cunningham groundout to second brought in a run to pull the Eagles within one but the Hurricanes’ bullpen proved up to task, with Cooper Hammond and Frankie Bartow teaming up to dance around trouble and secure the win.

On Thursday, it was even more of a pitching duel, but the edge once again went to Miami’s starter. Jeb Bargfeldt hurled a complete game shutout as BC’s Jacob Stevens was the tough-luck loser in a 3-0 loss. Bargfeldt, a crafty southpaw, allowed just two hits while striking out seven. He didn’t walk a batter, while the lone command miscue resulted in a hit batsman.

Stevens, meanwhile, tied his season high for strikeouts with nine, but gave up an RBI double to Jenkins in the first and a home run to Escala in the third. With Stevens’ lineup struggling mightily behind him, the two-run spot, paired with a run-scoring wild pitch from reliever Zach Stromberg in the eighth, was enough to doom the Eagles.

The BC hitters were frustrated throughout the day not just by excellent pitching from Bargfeldt, but additionally by the Hurricane defense. Palomaki finished just 1-for-4 on the day, but all three outs were defensive gems: two were on line-drive outs in the infield, while he also watched his fly ball to the warning track in the ninth fall into the glove of a sliding Hunter Tackett.

The frustration Palomaki undoubtedly felt was one the Eagles ran into often during the 2018 season, which ended up being the first time the group had missed the ACC Tournament in three years. The talent was seemingly there, but things never quite came together. BC’s offense was woeful, finishing in the bottom of the conference in average, on-base percentage, and runs scored. The pitching staff failed to find any kind of consistency—Metzdorf, for instance, threw eight shutout innings in one start and followed it up by allowing nine earned runs in less than four frames of work.

Still, fans of the program shouldn’t find themselves buried in a purely pessimistic outlook. Freshman outfielder Chris Galland not only reached base in 23-consecutive games at one point of the season, but also established himself as the conference’s most dangerous base stealer. Other players like Brian Dempsey and Dante Baldelli took big steps, and overall, a rather young team now has a year under its belt as it takes aim at escaping the dregs of the ACC in 2019.