Nothing Beneath ‘Book Club’ Cover

And you ruined it.

You ruined it, people who wrote, greenlit, directed, and starred in Book Club. We were almost done with the Fifty Shades mass hysteria, and now look what you’ve done. You’ve introduced this stupid, stupid book that spawned three terribly stupid movies to a whole new audience: the elderly.

If there’s any hope at all, Book Club, a pretty terrible movie overall, won’t have enough buzz to revitalize this horrible part of modern culture. But, if the laughter from the rest of the audience during some of the most mind-numbingly unfunny parts of this movie is any indication, the rest of us can kiss that hope goodbye.

Book Club, for some reason, stars four powerhouse actresses: Jane Fonda as Vivian, Mary Steenburgen as Carol, Diane Keaton as Diane, and Candice Bergen as Sharon. This movie isn’t for younger audiences by any standard—just like Sausage Party isn’t for people over the age of 25, and The Adventures of Sharkboy and Lavagirl 3D isn’t for anyone who isn’t being actively tortured. No, the humor of Book Club will most likely be lost on younger audiences, and the movie minces no words in expressing this—a film truly intended for mature audiences.

But, just because Book Club’s humor isn’t meant for younger audiences doesn’t mean the movie gets a free pass on being bad. No—just like Just Getting Started, it’s still a bad movie starring inarguably talented actors.

This is really frustrating to watch since all of these women, along with many of the side characters like Craig T. Nelson, Andy Garcia, Don Johnson and even Richard Dreyfuss (for like two minutes), can all do so much better. We’ve seen them all do so much better but they are just phoning it in here—on one of those old phones where you have to hold the mouthpiece and earpiece separately. What’s worse is that you can catch glimpses of them acting well in this movie—where the raw talent shines through for a scene or two—and then it’s back to nothing.

The plot, in a liberal use of the world, is that these four women are all life-long friends from college who have been meeting for decades for their book club. Each character has her own personality quirks: Jane Fonda’s character is very sexually active but emotionally unavailable, Mary Steenburgen’s character has been living happily with her husband for years but has recently been unsatisfied with their sex life, Diane Keaton’s character is basically being bullied and emotionally manipulated by her two obnoxious adult daughters, and Candice Bergen’s character is hung up on her divorce from many years prior.

At one book club meeting, Diane chooses Fifty Shades of Grey as the novel to read—although calling it a novel is like calling sewage a refreshing beverage. Through general coincidence—the book is considered a catalyst but it really isn’t—the lives of these women begin to change for the worse and better. “Hilarity” ensues.

Book Club is really just a disjointed collection of scenes loosely umbrellaed by the desire to connect the Fifty Shades book club idea with a happy ending about self-acceptance. Some of these scenes are humorous, others are simply uncomfortable, but most are really just indifferent. They just happen. The characters pretend to care, but no one is trying to act hard enough for it to really matter. The audience just gets to watch as these characters learn valuable lessons about love from a book that is all about a sexually and emotionally abusive relationship. It’s practically Aesop.

What’s truly a wonder is how this clearly mediocre-to-bad movie got made, but then we can remember the Adam Sandler system of just messing around with your friends in front of a camera and collecting a paycheck and it all starts to make sense. Not every movie can be good—it’s simply a shame that a movie with so much potential was this bad. 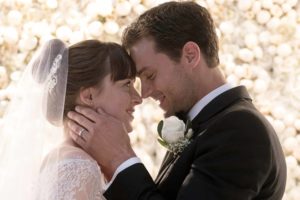