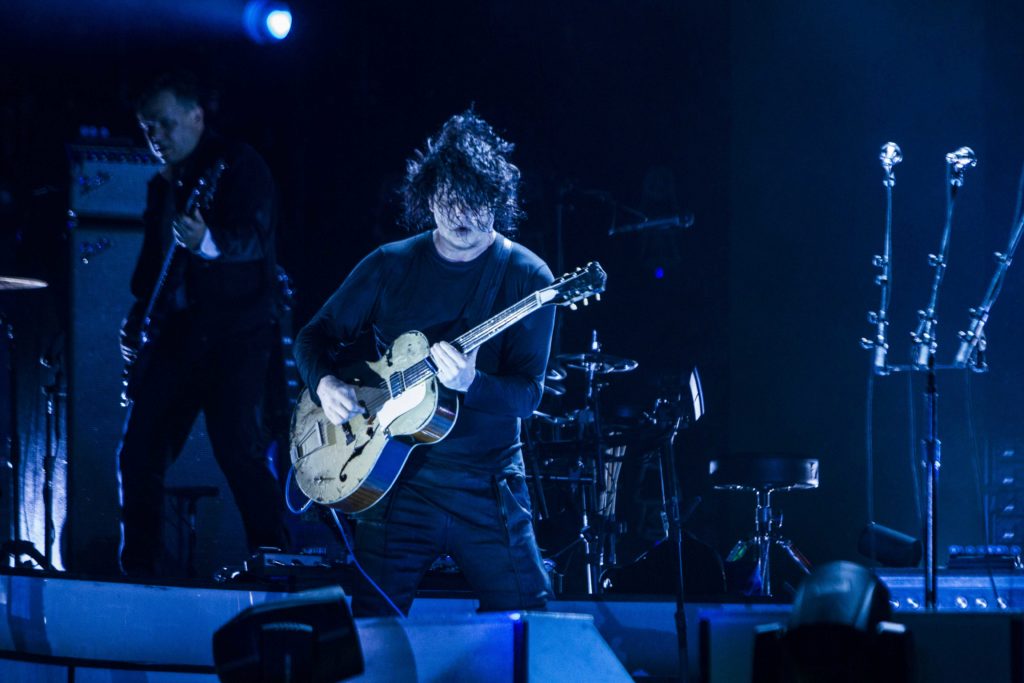 A heat wave overtook the city on the second day of Boston Calling, but the sound waves emitted from the amps of the festival’s stages cooled down audiences of thousands. Music lovers from all over convened in Allston for performances by Jack White, Queens of the Stone Age, BROCKHAMPTON, and more.

Leikeli47 took the Delta Blue Stage under the warm afternoon sun to perform an energetic set. Prior to the female rapper’s entrance, three dancers and a DJ pumped up the crowd with samples of Drake hits “God’s Plan” and “Nice For What.” Leikeli47, who donned a camo jumpsuit and red bandana balaclava for the set, entered the stage to the sound of “forty-seven” chants. The crowd quickly caught on to the hip-hop artist’s lyrics during “Miss Me” and sang along to her covers of “Killing Me Softly With His Song” and “At Night.”

Academy Award winning actress Natalie Portman hosted Leikeli47 and St. Vincent during the second installment of her three-day arena residency. St. Vincent stood still on the stage as her original composition for the 1933 film Verdict Not Guilty, a symphony of menacing synthetic tones played out of the packed arena’s speakers. Portman then took the stage to give a haunting reading from an Adrian Kennedy script over a second black-and-white film. Leikeli47 closed the panel with four songs and films that delivered feminist messages. Three of the featured films were by Alice Guy-Blaché, the first female filmmaker.

Hard rock fans showed up in thousands for the sets of Manchester Orchestra and Royal Blood, which took place on the Green and Red Stages respectively. Manchester Orchestra brought intricate guitar riffs and vulnerable, raspy vocals to the Green Stage while performing tracks like “Shake It Out” and “The Gold.” During the Atlanta-based band’s rowdy set, a few small yet rambunctious mosh pits formed in the crowd.

Royal Blood opened their set with the hit “Figure It Out,” and the crowd immediately recognized and began to sing along. The British rock duo brought a rockstar indifference to the set—the drummer even pulled a bottle of alcohol out from behind his drum kit during the band’s second song, “Where Are You Now?” Royal Blood showcased their illustrious skill during “Lights Out” with a headbanging warped guitar solo.

A massive crowd gathered at the Delta Blue Stage for hip-hop group BROCKHAMPTON’s performance. Bearface. opened with the electric guitar ballad “SUMMER,” a calm before the storm that was the band’s second song—”BOOGIE.” Kevin Abstract, who sported a black vest with “faggot” written in white uppercase letters across the chest, was the first of the band’s members to walk out for the high-energy hit. The crowd got riled up when rapper Tyler, The Creator walked by to watch the set from backstage, but Merlyn Wood was sure to regain the crowd’s attention by jumping off the stage and walking around the barricade’s perimeter during “STAR,” a silver screen-themed SATURATION track. The crowd sang along to “QUEER” and moshed per the band’s request during “SISTER.”

Following its performance at Boston Calling, BROCKHAMPTON announced Ameer Vann, who has recently been accused of sexual misconduct, is no longer in the band and the band cancelled its remaining tour dates. BROCKHAMPTON is rumored to be planning to delay the release of its upcoming album PUPPY as well.

St. Vincent performed songs that seamlessly meshed grunge rock and dance music on the Green Stage. The female singer Annie Clark, who attended the Berklee College of Music, wore a red cut-out onesie and utilized a rainbow of guitars during the set, switching instruments almost every song. After naming a few of the neighborhoods of Boston, Clark proclaimed “I used to be one of you” to the large crowd of Bostonians. Clark skillfully provided electrifying riffs to complement the instrumentals of her accompanying drummer and keyboardist during tracks like “Cheerleader” while abstract videos of human-like creatures played on the screen behind the trio.

Immediately following that set, a five-minute countdown to Jack White’s set showed up on the Green Stage screen. At the conclusion of the five minutes, the anxious audience was treated to an instrumental from White’s band before he took the stage to open with “Over and Over and Over,” a standout track from his recent release Boarding House Reach. White elongated the song’s guitar solo and set a precedent of embellishing tracks with long jams for the set.

Formidable guitar riffs cut like knives during White’s performances of “Lazaretto” and “Corporation,” both of which combined both White’s clean delivery with raw passion. White also pulled from his career as a member of The White Stripes, performing fan favorite “Hotel Yorba” with a white acoustic guitar. Later in the set, the crowd chanted “Are you steady now?” to White’s performance of The Raconteurs’ hit “Steady As She Goes.” White switched gears from his usual cool, removed vocal delivery to perform “Connected By Love” with stunning vulnerability, his hands hanging awkwardly at his sides when not strumming the familiar strings of his guitar.

The guitarist and his band exited the stage relatively early, but returned for a 40-minute encore that featured an opening video of White’s drummer throwing darts at President Donald Trump’s face. The tell-tale guitar riff of “Sixteen Saltines” immediately excited the crowd during the encore. White filled long instrumentals with improvised ramblings about wokeness and pictures of pregnant Cardi B, perfectly hitting every note with his skilled fingers along the way. The rocker concluded his set with “Seven Nation Army,” the song with the riff that became a popular stadium chant, under the blinding blue stage lights. White has been known to criticize video recording at his concerts, but the relatively small number of phones staring back at White during the festival set demonstrated that fans are eager to unplug when the legendary rocker plugs in his guitar.