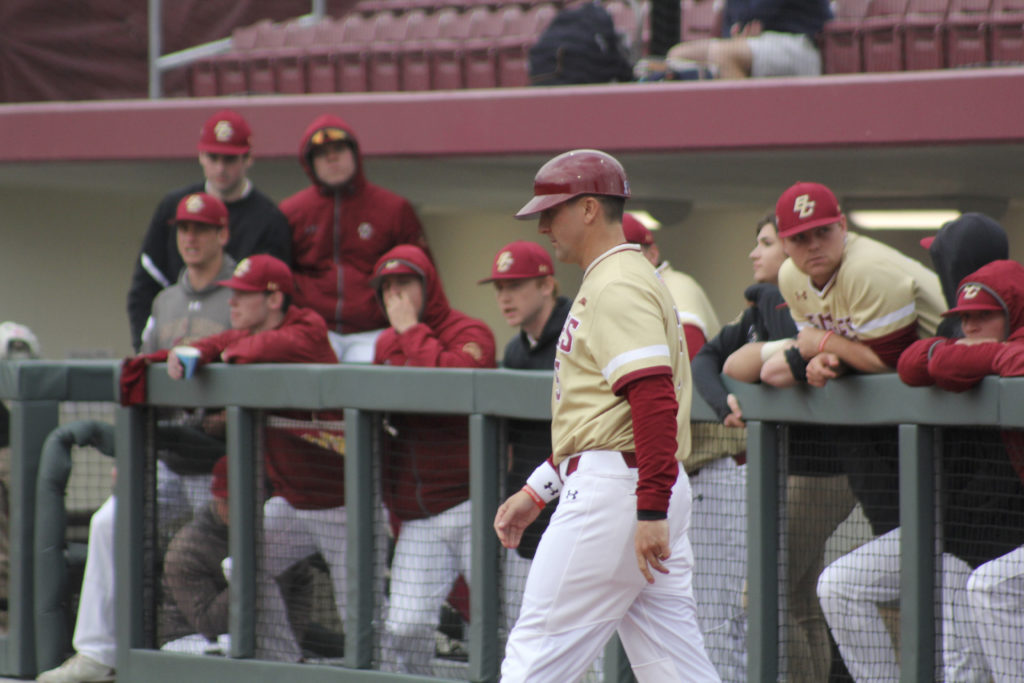 On the strength of good pitching and timely hitting, Boston College baseball made an inspired run to the 2016 Super Regionals, ultimately falling a game shy of the College World Series. At the time, it was the Eagles’ first winning season in five years and seemed like a sign of things to come under head coach Mike Gambino, then in his sixth year.

Still, regression was expected, especially with the loss of ace Justin Dunn to the first round of the MLB Draft, and it came—BC dipped three games under .500 in the ensuing campaign. The Eagles then lost Johnny Adams and Donovan Casey, two key pieces, but there was plenty of reason for optimism entering this past season. BC was counting on returning all three weekend starters and a core of players led by Jake Palomaki, Gian Martellini, and Brian Dempsey to make another ACC Tournament push in 2018.

Familiar struggles from a year ago popped up again, as the pitching staff posted an ERA above 5.00 once again, while the offense limped to a batting average just three points shy of the worst mark in the conference. The bullpen, already crippled by the loss of Casey, leaned heavily on a few arms but consistently faltered in key games. The Eagles went just 1-7 in one-run games, failing to find the timely hit when they needed, while an eight-game losing streak at the turn of April sent them tumbling toward their lowest win total in five years. BC went just 17-32 and finished in last place in the Atlantic Division, three and a half games out of a playoff spot.

The club began the year slowly, alternating wins and losses in non-conference matchups it could ill afford to lose. Understandable defeats to an eventual top-15 foe like Minnesota and regular contenders in Indiana and Bryant followed, but unexpected losses to Army, Wofford, and Rhode Island ensued. The struggles outside of the ACC resulted in a 10-10 mark, making any semblance of postseason play seem far-fetched pretty quickly.

You’d have been forgiven for being hopeful after the Eagles’ first ACC series against North Carolina State, one in which Gambino’s team entered with a 5-6 record. The Wolfpack—a talented group that is hosting a regional in the upcoming NCAA Tournament—narrowly escaped BC in the first two games, then lost the series finale in convincing fashion, 11-3.

BC took one of three in its next series—a three-game set against Virginia—and nearly came away with two victories, faltering in the 10th inning on Sunday afternoon. After winning a series against Virginia Tech, there was more optimism, as the Eagles sat three games under .500 overall but a respectable 4-5 within the conference.

The wheels quickly came off.

The Sunday loss to the Hokies set the eight-game losing streak in motion, and BC was never able to right the ship. The Eagles dropped conference series’ to Clemson, Pittsburgh, Wake Forest, Florida State, Notre Dame, Louisville, and Miami, limping to the finish line with tough loss after tough loss. They never really had a chance to sneak into the conference tournament like a year ago, especially with the last two teams in the bracket combining to go 4-2 against them.

In spite of all these struggles, the outlook in Brighton is still bright. Chris Galland, who spent a postgraduate year at Cheshire Academy, arrived on the Heights and immediately had an impact, providing steady offense and quite a bit of speed on the basepaths as a freshman. Galland earned All-ACC honors after slashing .316/.403/.398 with 28 stolen bases, and figures to play a key role for the next few years. Dempsey and Dante Baldelli both took steps forward as sophomores, with the former one of three BC players to hit above .300, while the latter slumped down the stretch but still was a threat on the basepaths and played well in center field.

Dempsey’s growth, in particular, is something to keep an eye on. The comparisons between him and Jake Palomaki, the senior captain on his way out, can be drawn—not just based on being measured at similar heights. Palomaki and Dempsey both found immediate success their freshman years, with each hitting over .260, with the former seeing his dip the second year. Dempsey, though, watched his average climb almost 60 points—a similar jump Palomaki had from his sophomore to junior season. Losing Palomaki, who hit a career-best .315 and rewrote the BC record books, finishing near or at the top in career walks, stolen bases, on-base percentage, at-bats, games played, and hits, is more than substantial—but Dempsey seems poised to step up as a similar threat near the top of the lineup.

Still, he’s far from a complete replacement, and losing one of the top hitters on a team starved for hits is especially ominous. Jack Cunningham (.243), Baldelli (.235) and Martellini (.230) were the next three hitters by average that return, while the rest of the lineup desperately tried to avoid dipping below the Mendoza Line.

It does help that two-thirds of the starting rotation returns in Dan Metzdorf and Jacob Stevens, but both struggled at times in their junior campaigns. That’s not to say it was all bad for the two, who each made 13 starts, but the lack of consistency is something that’ll need work. By game score, Metzdorf had three of the Eagles’ top five starts, but also three of the worst four—and if that doesn’t sum it up, nothing does.

Losing Brian Rapp, the third starter, will be tough as he was the most consistent of the weekend rotation. Rapp hurled quality starts in four of his last five outings and finished with the team lead in innings pitched, strikeouts, and average game score. Gambino will likely turn to Matt Gill or Jack Nelson for the third rotation spot—Gill is the likely choice, as he made six starts and found some success during midweek outings this year.

A lot of the question marks moving forward lie in the bullpen. Gambino mixed and matched throughout the season and found success with Zach Stromberg, Sean Hughes, and Thomas Lane—well, for the most part. Stromberg led the bullpen in ERA (2.96), allowing just two earned runs in his first 12 innings of work, while Lane had his hiccups but piled up innings (45.2) and saves (3) as the go-to arm. Lane shared closer duties with John Witkowski, who got better as the season went on—in his first nine outings, he gave up 17 earned runs in under five innings of work. The final nine appearances? He struck out 20 over 21 1/3 innings, allowing just three earned runs. Those second-half numbers are remarkable, especially if he can manage to start next season where he left off last. The bullpen struggled to keep leads and the Eagles’ woeful record in one-run and two-run games reflects that.

The growth from several players didn’t translate to wins, especially while paired with off seasons from expected key contributors, but still has the potential to carry over next year. After all, most of the roster will remain intact. Much of the infield will likely shuffle around as roles solidify, and right field remains up in the air, whether it’s Joe Suozzi, who had a strong second half, or an incoming freshman. Returning a majority of the weekend rotation helps, as does a lot of the bullpen. Maintaining a cautious optimism is crucial, though. It’s important to remember that much of the same was said about this year’s team in terms of depth—Gambino himself said he was“really excited about the roster” and thought the experience gained last year would translate to this season—so only time will tell if it’ll be different once 2019 comes around.