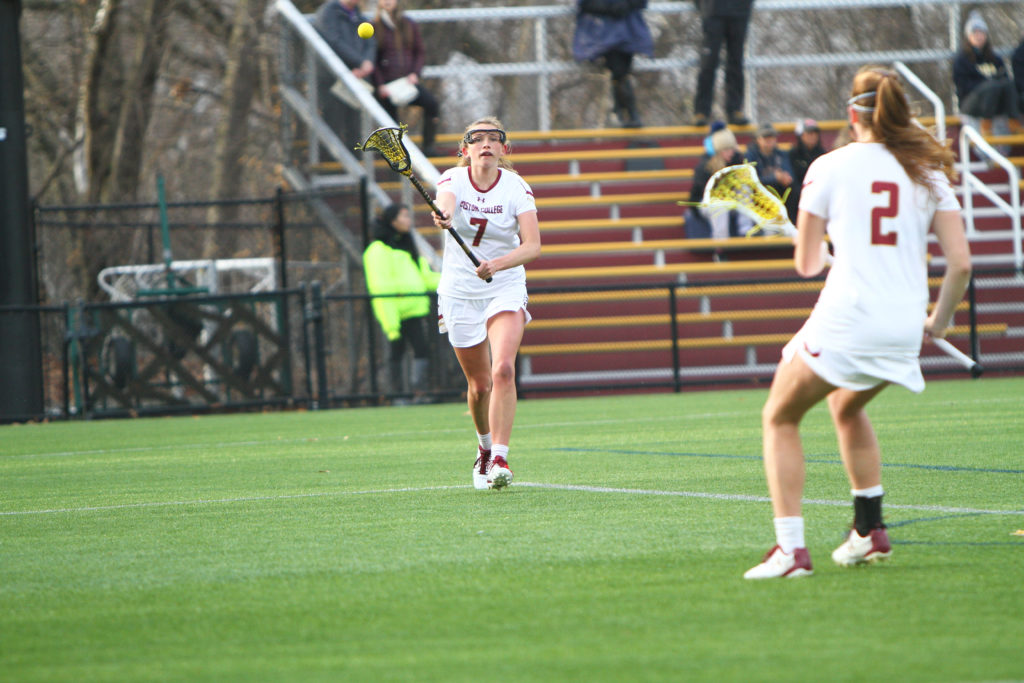 Two weeks ago, Sam Apuzzo was named the first Tewaaraton Award-winner in Boston College lacrosse history. From start to finish, the junior—the only one of the award’s five finalists to record at least 80 goals, 30 assists, and 100 draw controls in 2018—persuaded voters that she was the most complete player in the country. That said, she was just one piece of the puzzle. It was only a matter of time before some of her teammates were recognized on the national stage.

Not only was Apuzzo listed as a First-Team All-American for the second-consecutive year, but she was also named both Player and Attacker of the Year. On the other end of the field, her classmate earned a similar distinction: Miller joined Apuzzo as a second-time All-American, this time a First-Teamer, and was crowned Defender of the Year. Arsenault secured a spot on the First-Team along with her two aforementioned classmates, tying Maryland for the country’s most First-Team All-Americans this season. Hart rounded out the day as one of eight attackers on the this year’s Third-Team.

Apuzzo’s accolades come as no surprise, considering she was essentially pronounced National Player of the Year when she heard her name called at the Tewaaraton Award Ceremony on May 31. The West Babylon, N.Y. native wasted no time picking up where she left off in 2017, compiling 43 points over the course of the first six games of the season. Eventually her numbers dipped toward the end of the regular season, due to the fact that teams finally decided to faceguard her on a period-to-period basis. Still, it was during that stretch that Apuzzo had her biggest moments, like scoring the game-winner against Syracuse with 1.7 seconds left in regulation to tie off BC’s undefeated regular season—not to mention the final stages of the Eagles’ National Semifinal matchup against Maryland when she logged back-to-back goals to upset the defending national champions. When all was said and done, the star attacker finished the year with 88 goals, 41 assists, 129 points, and 163 draw controls.

Just like last season, Miller held down the fort on defense. Leading a much-improved unit that ended the year tied for 13th in the national rankings, the junior upped the ante in 2018. Miller routinely guarded the opposition’s lethal attackers, causing 19 turnovers and scooping up 31 ground balls along the way. Perhaps most impressive, though, was the defender’s development on the offensive side of the ball. Head coach Acacia Walker-Weinstein made a concerted effort to move Miller up the field, typically in transition, at various points of the season. The New Canaan, Conn. native reaped the benefits. In fact, Miller—who totaled just four points as an underclassman—practically doubled that mark, tallying six goals and one assist on the year.

She wasn’t the only one to step out of her comfort zone. Arsenault took an even bigger jump. After losing scorers like Kate Weeks, Mary Kate O’Neill, and Kenzie Kent—who redshirted the 2018 season—Walker-Weinstein asked Arsenault to play more of an aggressive role in her junior campaign. The midfielder spent the majority of her first two years on the Heights shoring up the back end. Her stats tell the story: Arsenault recorded just 25 points as an underclassmen, taking a backseat to Weeks, Apuzzo, Hart, and Kent on the Eagles’ 2017 National Championship run. Initially hesitant to attack, the junior came into her own in a matter of weeks.

After recording a mere four points in the first two games of the season, Arsenault racked up five or more in each of the next four contests, quickly teaming up with Apuzzo to establish one of the most potent one-two punches in the ACC. Arsenault could score at will, as evidenced by her overtime game-winner against Stony Brook that vaulted BC to its second-straight National Championship game. But it was playmaking ability that separated her and Apuzzo from the rest of the pack. By the end of the year, Arsenault had quadrupled her career point total, logging 64 goals and 39 assists to eclipse the century mark for the season.

Hart made a name for herself during the 2017 postseason. She scored 11 goals in the opening three games of the NCAA Tournament before netting the game-winner against Navy to send BC to its first-ever National Championship. It was quite clear that Hart—a junior at the time, who had only recorded nine points as a underclassman—was a late bloomer.

Prior to this past season, she was named a team captain and quickly showed why. Hart notched four goals in the opener at Notre Dame, kicking off what would be a career year. She served as the Eagles’ third-leading scorer, yet on occasion looked like the best attacker on the field. Hart never shied away from contact, often infiltrating the 18 and drawing a foul on her way to the cage. She made the most of the whistles—of her 57 goals, 15 came on free-position attempts. Hart finished the season with a career-best 85 points and played a major role in jumpstarting the Eagles’ second-consecutive NCAA Tournament run.

Before Thursday, the Eagles never had more than three players earn All-American honors in single-season program history. As far BC is concerned, the best part about the news is that all but one of the stars are returning to Chestnut Hill next year.