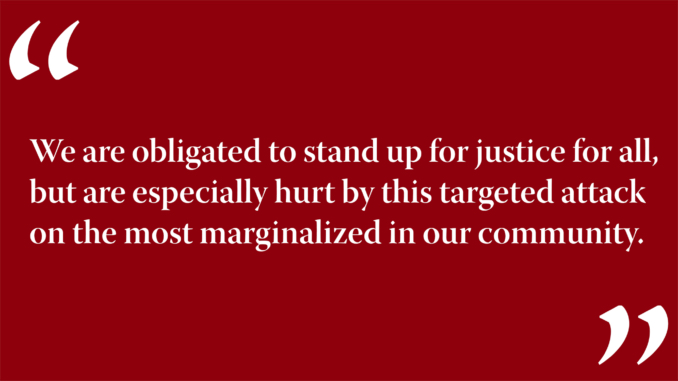 Guest Op-Ed: A Statement of Solidarity

On Tuesday the 26th of June, the Supreme Court ruled in a 5-4 decision that the Muslim Ban, a policy motivated by explicit racism, xenophobia, islamophobia,  anti-immigrant, and anti-refugee sentiment, was constitutional. The court chose to ignore the animus of the current amoral administration and sided with hate, fear, and prejudice. We, the Boston College Muslim Student Association, must confront and call out injustice in all its forms. It is an understatement to say that we are disappointed, dismayed, and appalled by this decision.

This incorrect decision from the Supreme Court brings this country back to the 19th and 20th century when the same court ruled segregation to be legal and the internment of Japanese Americans to be constitutional. As Americans, we should all be outraged by the Muslim Ban, one of the clearest examples of state sponsored islamophobia that we are witnessing in our country today. While Muslims do not need to “prove their worth” to be allowed into this country, it is undeniable that Muslims, who have existed in America since before its founding, have made countless contributions to our society and that we all benefit from their presence. The actions of this administration to separate families across continents as a result of this ban or through prisons and policing should cause the same outrage as the separation of families that is happening at the border.

Islam teaches us love and compassion, but it also instructs us to stand up for the oppressed, regardless of their faith. Allah states in the Quran that “O you who believe, be persistently standing firm in justice as witnesses for Allah, even if it be against yourselves or parents and relatives. Whether one is rich or poor, Allah is more worthy of both” (4:135). We are obligated to stand up for justice for all, but are especially hurt by this targeted attack on the most marginalized in our community.

We value Boston College Jesuit values that instruct us to be men and women for others, and have respect for people of all religions and backgrounds. We must stand together as students, faculty, staff, and administration in support of the marginalized against bigotry and hate in all its forms.

Even within our small Boston College Muslim community, this decision has impacted international students, U.S. citizens, dual citizens, immigrant and refugee families, and has separated loved ones across international borders for an indefinite time. It has prevented members of our community from visiting their grandparents, obstructed them from attending family reunions, weddings, and even made obtaining medical treatment an impossible hurdle. It has created a climate of fear for all Muslims in America, and challenged our most basic ideals of religious freedom, compassion, and equality. As representatives of the Boston College Muslim Student Association, we will continue to advocate for our communities as well as all marginalized communities in the face of bigotry and hate, no matter the origin.

The Committee for Creative Enactments

Presenting Africa To You (PATU)