Home » Heading Into Camp, Addazio’s Eagles Are in Uncharted Territory 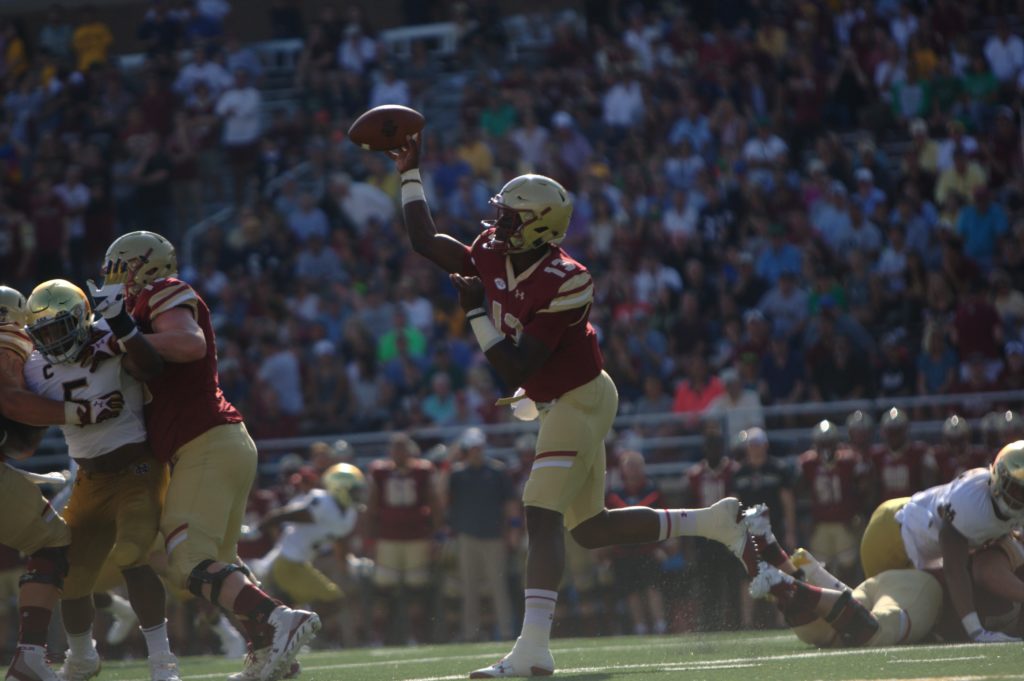 Heading Into Camp, Addazio’s Eagles Are in Uncharted Territory

Boston College football is coming off its fourth 7-6 season in the past five years and a gut-wrenching postseason loss—the third of head coach Steve Addazio’s five-year tenure—yet there’s more optimism surrounding Addazio’s Eagles than ever before.

Last Wednesday, ESPN released its ACC Preseason Power Rankings, co-written by Andrea Adelson and David M. Hale. Right below Clemson, Miami, and Florida State—three of the most renowned programs in the Power Five—lies BC, the dark horse of the conference, exactly 366 days after the ACC bottomfeeder was picked to finish last in the Atlantic Division for the third year in a row.

Adelson and Hale’s listing isn’t a matter of entropy, rather it appears to be a systematic projection hinged on the Eagles’ 2017 performance, specifically their level of play throughout the final seven games of the season. It’s apparent that last year’s rollercoaster season wasn’t just another 7-6 campaign—it was a tale of two teams that captivated fans and the media, even on a national scale.

BC lost seven starters to season-ending injuries, including the team’s quarterback, center, strong-side and middle linebackers, and a pair of future NFL draftees. Over the course of the first six games of the year, the team recorded just 16.3 points per game—its lowest scoring output since the 1978 season, a year in which the Eagles went 0-11. Addazio and offensive coordinator Scot Loeffler were employing an up-tempo offense, running 75-plus plays on a game-to-game basis, but it was the quality of said snaps that proved troublesome.

Redshirt freshman Anthony Brown was averaging a mere 4.7 yards per pass attempt—to put that in perspective, there were over 100 signal callers in the country that finished last season with an average of 6.5 yards per pass attempt or higher. Restricted to dink-and-dunk passing, the Eagles’ aerial attack was nothing more than a glorified run game. And it wasn’t like BC was rushing the football down opponents’ throats either. In fact, the duo of Jonathan Hilliman and A.J. Dillon posted just 3.4 yards per carry during the first half of the season. The backs’ struggles can be attributed to the fact that they were running behind a makeshift offensive line—a unit that lost Elijah Johnson and Jon Baker, two 2016 starters, to season-ending knee injuries prior to September.

It wasn’t until the Eagles lost to Virginia Tech, 23-10, on Oct. 7 that everything started to change. Even without star wide receiver Cam Phillips, who suffered a first-quarter injury, the Hokies—led by quarterback Josh Jackson—walked all over BC’s defense, racking up a total of 431 yards on the night. Brown and Co. were dysfunctional to say the least, coming up short on 15 of their 17 third and fourth-down conversions. Following the game, Addazio made a promise that changed the complexion of the season.

“It’ll come together, and it’ll be beautiful,” he said. “You can write that one down.”

Soon after, the team captains held a players-only meeting and, from that point forward, the Eagles were a completely different team. Not only did BC win five of its last seven games of the season, but it did so in dominant fashion. The Eagles poured on 40 or more points against ACC opponents—something they hadn’t accomplished since 2009—on three separate occasions down the stretch, averaging 33.7 points per game during that span. Their offensive outburst was fueled by Dillon, who logged 1,236 yards and 13 touchdowns in the final two months of the season. The ACC Rookie of the Year set all kinds of BC single-season records and became just the second freshman in conference history to eclipse the 200-yard mark twice in the same year.

Dillon’s downhill running style and elusive cutting ability opened up Loeffler’s playbook. Alternating between play-action, a rough-and-tough ground attack, and a spice of trickery, the second-year coordinator threw opposing defenses off their game, week after week. Without his training wheels, Brown finally showcased his natural talent—a mix of speed and power, both through the air and on the ground. The scheme was practically flawless. Even when the redshirt freshman went down with an ACL tear against North Carolina State, the offense continued to produce with backup Darius Wade at the helm—a quarterback who had completed just 33 of his 69 career pass attempts prior to 2017.

Ironically, it was turnovers that cost BC its first eight-plus win season of the decade. Although the Eagles finished the year with a plus-five turnover margin, the 30th best in the NCAA, they couldn’t seem to hold onto the ball in the biggest game of the season. BC gave the ball away to Iowa three times during the New Era Pinstripe Bowl, most notably twice in the final five and a half minutes of regulation. While the loss made it seem like the Eagles were no greater than their former iterations, the box score showed just far they had really come.

All in all, BC outgained the Hawkeyes by 183 yards, moved the sticks on eight of its 17 third-down conversions, and averaged 7.7 yards per pass attempt—all of which were nearly impossible feats the year before. Addazio’s team went from rounding out the ACC’s cellar to resembling one of the most watchable units in the conference, let alone the country.

The question is, was the seven-game stretch a fluke? After all, most of the Eagles’ second-half opponents were hardly playing up to ACC standard when the two sides met. In fact, the combination of Louisville, Florida State, Virginia, and Syracuse—the four ACC teams that BC defeated last season—posted a putrid 11-17 record against FBS opponents from Oct. 14 on. It’s very possible that the Eagles simply caught their conference foes at the right time.

Then again, some may argue that the way BC beat those same teams is a confirmation of the Eagles’ legitimacy. And many point to their youth and depth when projecting their 2018 success. Locked and loaded at nearly every position on the offensive side of the ball, BC is no longer seen purely as a defensive-minded team.

“With the depth we have offensively and the versatility we have offensively, we were able to score those points, and it’s big,” now-senior tight end Tommy Sweeney told reporters at Thursday’s ACC Kickoff, per BCEagles.com. “Scoring points is—it’s how you win a game, right?”

If BC is to have any shot at an Atlantic Division title, it’ll most likely have to light up the scoreboard from Day One. With one of the deepest offensive lines in the nation, a dynamic quarterback, a Heisman Trophy candidate running back, a John Mackey Award-caliber tight end, and a host of young wide receivers, the Eagles have the roster talent to duplicate, and even surpass, their second-half numbers. That said, there’s no guarantee everything goes to plan, especially with this program’s injury history.

But perhaps the team’s toughest obstacle of all will be dealing with the national media attention. BC is no longer tasked with proving people wrong—instead it’s going to have to live up to expectations, and lofty ones at that. In one year, the perception of the program has completely changed, on and off campus. Last September, students were using sticky notes to write out “Fire Addazio” in the windows of 90 St. Thomas More. Now, due to the efforts of Director of Athletics Martin Jarmond and the team’s second-half surge, BC is respected. Once the laughing stock of the conference, Addazio’s Eagles are truly in uncharted territory.

“All those projections, they’re nice, and nice to have good press, but … nobody has really bought into it—all the fame and publicity—and they haven’t slacked off,” senior defensive end Zach Allen said, per BCEagles.com.

As far as Eagles fans are concerned, Allen better be right. Time and time again, national honors and accolades have destroyed teams at the college level. For instance, take Tennessee—the Volunteers entered the 2017 campaign ranked 25th in the AP Preseason Poll, one year removed from a 4-1 finish and a 9-4 season. Tennessee won three of its four games before completely unraveling, en route to a dismal 4-8 mark. With a backloaded schedule, the Eagles could very well find themselves inside the Top 25 in the early portion of the fall—whether they climb or plummet is dependent on just how well they follow Addazio’s blueprint.

Last year, BC was recognized for overcoming the injury bug. If the Eagles are to take the next step in 2018, they’ll be remembered for a different kind of toughness—that of mental fortitude.