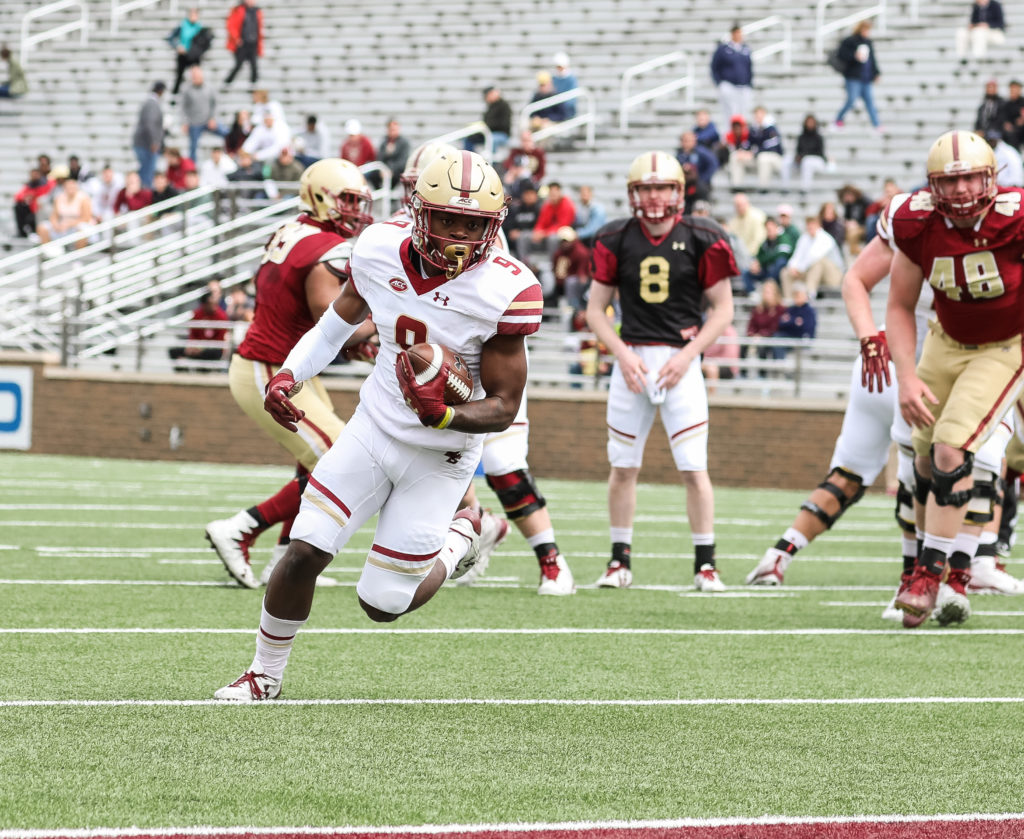 Eagles Open Preseason More Experienced, Healthy Than in Years Past

Even though Boston College football lost this year’s New Era Pinstripe Bowl, finishing 7-6 for the fourth time in head coach Steve Addazio’s five years with the team, there was an overwhelmingly positive vibe surrounding the program this offseason.

In addition to reeling in 20 high schoolers—including their second four-star recruit in the past four years—the Eagles returned 81 percent of their offensive production (according to SB Nation), most notably their starting quarterback, running back, and five of their top six receivers. They were picked to finish fourth in the Atlantic Division in the ACC Preseason Poll—higher than any other BC team in the Addazio era—and slotted as the fourth-best team in the conference, per ESPN’s ACC Preseason Power Rankings. The seven months of offseason speculation finally came to an end on Friday.

The Eagles opened the preseason wearing helmets, practice jerseys, and shorts inside the new Fish Field House, marking the start of the NCAA’s five-day acclimatization period—a policy that eases student-athletes into the grind of camp, gradually increasing the amount of protective equipment and length of physical activity throughout the first week of practice.

With an older group of guys than in years past, most of the players are used to the schedule.

“The older you are, the more experienced you are, the quicker you hit the ground running—looking more like you should look,” Addazio told BCEagles.com.

Once again referencing Bill Connelly’s Jan. 31 SB Nation article, the Eagles are returning the most offensive production out of any team in the Atlantic Division. Throw defense into the equation, and BC clocks in at 31st in the nation’s returning production rankings, higher than all but two other ACC teams.

Addazio hinted that BC’s up-tempo offense, which struggled throughout the first half of last season, should hit the ground running this year. The Eagles ran 76.8 plays per game in 2017—the 25th most in the country and an average of nine more per game than they called the season prior—but posted a meager 16.3 points per game in the first six games of the campaign. It wasn’t until mid-October that the offense really gelled. Another slow start would likely spell doom for a BC team with one of the hardest second-half schedules in the Power Five.

The only player that sat out Friday’s practice was offensive lineman Elijah Johnson, who is still rehabbing from an ACL injury that he suffered during the 2016 offseason. Depth in the trenches is no longer a concern, though—at least for the moment. Aaron Monteiro, Sam Schmal, Jon Baker, Chris Lindstrom, and Ben Petrula took most of the first-team reps, but as Addazio noted there are seven guys on the roster who have logged 10-plus starts on the line.

They’ll be blocking for ACC Preseason Player of the Year and Heisman Trophy candidate A.J. Dillon, who apparently looked the part on Friday. Not only did the sophomore showcase his elusive cutting ability, but he also caught a handful of passes out of the backfield. It’s important to note that Dillon didn’t catch a single pass last season. Those touches were left for fellow running backs Jonathan Hilliman and Travis Levy.

Whether the ball actually gets to Dillon will depend on starting quarterback Anthony Brown. The redshirt sophomore missed the final three games of last season with a knee injury, but participated in the first practice of the 2018 campaign, donning a brace on his right leg. Addazio told reporters that Brown, who only completed 51.9 percent of his 2017 pass attempts, was visibly frustrated when he missed throws in drills. The head coach emphasized that Brown has to be patient with his recovery and take one day at a time.

In a departure from on-the-field activities, EagleAction reporter and former Heights editor Riley Overend, asked Addazio whether he knew about now-former Ohio State wide receivers coach Zach Smith’s 2009 arrest for battery (occurred during Smith’s five-year stay at Florida) when he hired Smith at Temple in 2011. The question comes in the wake of Smith’s firing and the allegations surrounding Buckeyes head coach Urban Meyer’s knowledge of Smith’s alleged abusive relationship with his wife, Courtney, while at Florida—where he headed a coaching staff that included Addazio—and Ohio State. Addazio’s response was concise.

Steve Addazio on whether he knew about Zach Smith’s 2009 arrest for battery when he hired the WR coach at Temple in 2011: “As University policy, I don’t comment on other institutions, okay?”

For now, Addazio is focused on the season at hand, one that could define his legacy at BC. He’s in it for the long haul, maintaining the importance of taking the preseason slow and holding off the sophisticated schemes till further notice.

Perhaps above all else, he stressed that it’s necessary to work on the “sudden changes,” like throwing an interception and then having the defense come out onto the field for a big stand with very little time to soak in the situation. In his eyes, being prepared for those scenarios could be the difference between winning and losing—the difference between a 7-6 team and a top-tier ACC powerhouse.