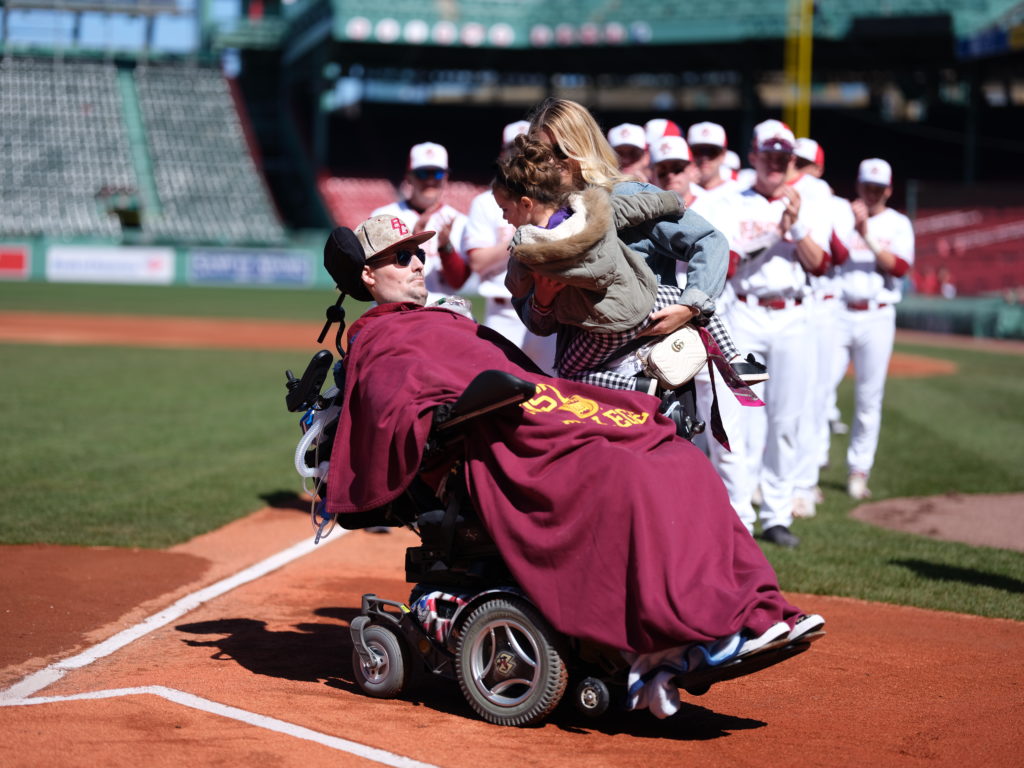 Taking a look back on summers past, it’s nearly impossible to forget the Ice Bucket Challenge movement begun by former Eagles baseball star Pete Frates, BC ’07, and Pat Quinn back in 2014 that raised over $220 million in donations. Millions of people participated and, along the way, learned a great deal about such an important cause. But for so many trends that go viral, the challenge soon becomes: What’s next?

This very question has been answered both on and off the diamond, and more recently—oddly enough—on the basketball court.

One of the people that has been there since the beginning is the man leading Birdball himself, head coach Mike Gambino, whose enthusiasm toward Frates’s mission has shown no signs of slowing down throughout his tenure.

“It’s part of the core of our program now,” Gambino said in an interview last month. “We’re hoping to make [ALS] the cause for college baseball.”

The Eagles have hosted an ALS Awareness Game in each of the past seven years, with all proceeds going toward disease-related research. A record number of tickets were sold this past April. The eighth-year coach hopes that, soon enough, #StrikeoutALS will have the same effect on college baseball that Coaches vs. Cancer has had on men’s college basketball the past 25 years.

“Pete Frates just put it well over the mountaintop with his interest in beating this disease,” said Seminoles head coach Mike Martin back in April at Fenway Park. “When [he] came out today, I took the chance to tell him I loved him, because I’m so proud and so emotional about what he’s been able to accomplish.”

Even putting the Ice Bucket Challenge aside for a moment, it’s important to recognize how far college baseball itself has come in terms of ALS awareness.

It started back in March of 2012. The Eagles were about to begin a weekend series in Clemson, but before getting off the bus, Gambino rose to address his team—he had to.

Despite his graduation five years prior, a lot of current players on the team still knew who Frates was: a former captain, a leader of the team. Zanna Ollove, a former BC athletic communications director, who served as the team’s sports information director for eight years, recalls the shock on many players’ faces, and the hurt in Gambino’s voice when he told his team Pete had been diagnosed with ALS.

From then on, Frates and his family were essentially part of the team, traveling with the Eagles to as many games as possible. Ollove assisted in organizing events for the players, and promoted the first ALS Awareness Game, which took place that very season. And it didn’t take any convincing to get the players on board, either.

“They all loved Pete,” Ollove said last month. “The guys would talk with him before and after games simply because they truly enjoyed doing so, and they were totally behind him to support both him and his family.”

Fans quickly spotted ALS wristbands that all the players wore in honor of Frates (even today many current Eagles still do). On top of that, Ollove and her team worked to integrate ALS Awareness into any social media buzz they could. She and the Frates family decided to use the official @BCBirdball twitter account rather than Frates’s own because, at the time—with 3,000 followers—the account had nearly 1,000 more than Pete’s.

“We started off by searching for any Ice Bucket Challenge video we could find and then retweeting it, but everything just blew up,” Ollove said. “We were just amazed more than anything.”

Today, Frates’s account has over 32,000 followers—a testament to just how far Team FrateTrain has come. And fortunately, the Ice Bucket Challenge only seems to have been the launching point for the mission.

Gambino explains that in the weeks following Frates’s surge into the national spotlight, he met with the Frates family, and talk surrounded the idea that the incredible run seemed to be winding down. Typically, such is the case with a viral media sensation. Yet, they couldn’t have been more wrong.

Gambino and Frates had the chance to tour ESPN Studios in Bristol, Conn. with Drew Gallagher, then a features manager with the station and a former friend and classmate of Gambino’s at BC. The visit came with a twist.

“Drew just started filming, and helping Pete anyway he could,” Gambino explained, “and he always sorta said, ‘I don’t know what I’m filming for, but I wanna do a story on Pete at some point.’”

Gallagher jumpstarted two ESPN feature pieces based on Pete—one on the Ice Bucket Challenge and one for Father’s Day, both of which Gambino said allowed Pete’s mission to “really explode.”

Since then, it’s still been a wild ride for the Frates family. Recent advancements have recently been made in ALS research, much of which was funded by money raised through the Frates family; a book by Casey Sherman and Dave Wedge, The Ice Bucket Challenge: Pete Frates and the Fight against ALS, was published last September; and perhaps most importantly, the general public has been made more aware of a terrible disease.

“Kids at BC now probably didn’t even know what ALS was back then, and now the whole world knows thanks to Pete, because he decided that the issue wouldn’t revolve around him, but those that came after,” Gambino explained.

Gambino notes that Pete’s selflessness isn’t all that uncommon at BC. Those familiar with the school know Welles Crowther, the former Eagle that died while saving at least a dozen lives on Sept. 11, 2001.

The Jesuit mission, “men and women for others,” always seems to work its way into the lives of former Eagles—it did most recently, in fact, with a former star on the basketball team.

Sean Marshall, BC ’07, like many others, fit Gambino’s profile as a kid that, back then, had no idea what ALS was. His freshman year at BC he was roommates with Brian Martel, a good friend of fellow freshman Pete Frates. Frates would often visit their room, and before long, he and Marshall became close friends.

Fast forward to two years later, and Marshall and Frates found themselves in the same spot that every riveting BC story has ever taken place: the Mods.

There, Frates approached Marshall, who was in the midst of bringing his squad to a second-straight NCAA Tournament appearance, and asked if he wanted to join him, another baseball player, two golfers, and a hockey team manager to be roommates the following year.

“They didn’t think I was gonna say yes, but I did,” Marshall said last week. “And it was the best experience—rooming with the guys that I did—out of all my four years.”

The relationship between the two didn’t end after college. They stayed in touch, and when Frates was diagnosed, he reached out to Marshall directly, who was then playing overseas in Turkey.

To say that Marshall was heartbroken would be an understatement. He did some research, and soon began to realize just how severe the disease was. One of his closest friends, halfway around the globe, would be entering a battle that no one on the entire planet seemed to know how to properly fight.

Marshall, however, knew what Pete was still capable of.

“[The Ice Bucket Challenge] was unbelievable, but to be honest I wasn’t shocked by it and everything that Pete has done for this disease,” Marshall said. “It sucks that he was diagnosed with [ALS], but I really believe that if anyone had to get it, he was the perfect person because he’s such a fighter, such a positive guy, and instead of giving in like I probably would, like most people probably would, he decided that he wanted to help the people that came after him.”

It wasn’t long before Marshall decided that he too was going to make a difference. In 2016, he spoke with former teammate Stevie Hailey, and the two founded a team to compete in The Basketball Tournament, a $2 million, winner-take-all, ESPN-sponsored summer league.

Marshall—who acted as both general manager and starting small forward—admits they were a bit of a mess that first season, but were headed in the right direction. Hoping to change the focus of the team, and recognizing the huge media platform ESPN provided, he suggested that they rename the team after Pete. From Turkey, Marshall called up the Frates family, who were ecstatic about the idea. They all agreed on a team name: Team Challenge ALS.

Other members of the team, many of whom were Marshall’s friends, embraced the idea, despite not knowing much about the disease. Just as Marshall had done years prior, they did their homework, and some even found out they had personal relationships to relatives with ALS.

In their first new-and-improved season, Marshall’s squad vastly exceeded expectations, making it all the way to the championship game after entering elimination play as just a No. 6 seed.

“You’ve got guys just trying to play for a check, basically, and whenever you can play for something more meaningful than just money or trying to win a tournament, it’s really special,” Marshall said. “Everybody bought into the cause we were trying to bring awareness to, and it was just a special feeling. You could actually feel how special it was.”

Throughout the magical run, Marshall received letters from patients with ALS telling him how much his team meant to them. This summer, Team Challenge ALS made it back to the knockout stage, this time as a No. 1 seed. This time around, players on the team opted to wear names of those affected by ALS on the backs of their jerseys. On the back of Marshall’s jersey? Frates.

“That’s my guy,” Marshall said. “It’s hard for me to watch him struggle like this, but I know he’s strong, he’s a fighter, he’s going keep doing that until his body doesn’t allow him to do so anymore.”

Despite falling in the Elite Eight, Marshall remains extremely optimistic about the future. He’s specifically proud to have made an impression on the basketball community, one that would likely be unaware of ALS otherwise.

He’s getting older, but Marshall intends on being a part of Team Challenge ALS even after he steps off the court, likely to remain as the team’s general manager. He has been in recent contact with the ALS Association and has visualized future success.

“Although we got our inspiration from Pete, it’s so much bigger than him,” he said. “It’s an awesome feeling, and we’re just going to continue to grow from it.”

The Ice Bucket Challenge may have made waves in 2014, but it’s crucial to remember that one sensational result isn’t the end of the story.

“Everytime we have an ALS Awareness Game it’s bittersweet because the goal is to not have any more ALS games,” Gambino said. “The goal is to say, ‘mission completed.’”

There’s no telling if or when a cure for ALS will be found, but it’s safe to hold onto hope as long as certain people are around to pave the way for future generations. People like the Frateses. People like Mike Gambino. People like Drew Gallagher. People like Zanna Ollove. People like Sean Marshall. They all prove that it simply takes courage to make a difference.