Boston College football is set to kick off the 2018 season this Saturday against Massachusetts, meaning that many of the questions surrounding the Eagles will soon be answered. After months of anticipation and three weeks of training camp, it will soon become apparent if running back A.J. Dillon can live up to the hype created by his fantastic freshman season, whether Anthony Brown recovers from his season-ending injury to build on his exciting, but inconsistent 2017, and how well the Eagles’ defense will hold up after the loss of a handful of key contributors. Most importantly, we will soon know whether BC can live up to, or even surpass, the expectations as a fringe top 25 team and the darkhorse of the ACC.

To help answer some of the remaining questions surrounding the team, the Eagles released their first official depth chart of the year on Monday afternoon. Though there were no big surprises, there are still several interesting insights to be gained from taking a good look at the different position groups. Here are some numbers to remember:

116: The number of combined career starts that BC’s first-string offensive linemen have recorded while on the Heights. The O-Line includes two fifth year players in Jon Baker and Sam Schmal, two seniors in Chris Lindstrom and Aaron Monteiro, and sophomore Ben Petrula, who was forced into action last season after Baker’s season-ending knee injury and started 12 games at center for an excellent Eagles offensive line—a unit that allowed just 15 sacks. Backing them up are two more experienced players in John Phillips (12 career starts), and Anthony Palazzolo (15 career games played). Not listed on the depth chart is Elijah Johnson, a redshirt sophomore who started 10 games in 2016 before missing all of 2017 with a knee injury and continues to work his way back into the rotation. This combination of experience and depth combines to make BC’s offensive line one of the team’s strongest position groups, and the guys up front will surely provide the offense with a solid foundation, as it looks to build on an explosive finish to last season.

2: Both the number of Dillon, who was voted ACC Preseason Player of the Year, as well as, interestingly, the number of running backs listed on the depth chart. Dillon will be expected to shoulder a heavy load this year after rushing for 1,589 yards, good for seventh most in the country, and averaging 5.3 yards per carry last season. BC fans are counting on him to put up similar numbers this time around, as they rightly should, but they should also be concerned about the minimal depth behind him. Travis Levy is the only other back listed behind Dillon, and he doesn’t profile as an every down back for the Eagles. David Bailey, John Fadule, Ben Glines, and even Davon Jones (who is listed as a linebacker) have all taken snaps at running back during camp, but the Eagles are really missing someone like Jonathan Hilliman, who could be used as a reliable alternative for Dillon to keep his reps, and potential for injury, down. The first few weeks of the season should reveal whether the Eagles have that guy on their team.

53: The career field goal percentage of Colton Lichtenberg, who is currently listed as BC’s starting place kicker. The kicking game has been a weakness for the Eagles in recent years, and it will continue to be looked at as a weakness until Lichtenberg proves that he can consistently make kicks, especially those from 40 yards out. Needless to say, one missed field goal can be the difference between winning and losing a tight contest, and BC figures to be in a few of those in 2018 with a tough schedule. Improving this percentage is key for the Eagles if they want to make the jump this season.

7.5 and 15: The combined sacks and tackles for loss between Noa Merritt and Harold Landry—a total which would have undoubtedly been higher had Landry not missed the last five games of the year with an ankle injury—that the Eagles are looking to replace this upcoming year. Zach Allen, who received a vote for ACC Preseason Player of the Year, will hold down one side of the line while looking to build on a 2017 that saw him record six sacks and 15.5 tackles for loss, along with an interception. Wyatt Ray, a player Coach Steve Addazio labeled as “elite” during training camp, will look to live up to that label as a secondary pass rusher for the Eagles, and will need to do. The two second-string defensive ends, Marcus Valdez and Brandon Barlow, have played in just four total games. Meanwhile, senior Ray Smith will anchor a relatively young interior line. The three other players listed at defensive tackle and nose tackle, Jaleel Berry, TJ Rayam, and Tanner Karafa, are all underclassmen, the most experienced of whom (Karafa) is a converted defensive end. Teams like Miami, Clemson, and Florida State will undoubtedly attempt to establish the run against the Eagles, and one of these untested players will have to step up and shore up BC’s run defense.

20: The combined number of games that Connor Strachan and Max Richardson, two of the Eagles’ starters in 2018, missed last season with knee injuries. Strachan—a fifth-year senior who has totaled 176 tackles throughout his career at BC—steps back in to reclaim his spot as the Eagles’ middle linebacker, while Richardson slides back in to his spot at weakside linebacker. On the strong side, Kevin Bletzer, who started nine games and forced two fumbles, won the starter spot, beating out sophomore Isaiah McDuffie. Although the Eagles’ backups are young, with both McDuffie and John Lamot—the second-string middle linebacker—being underclassmen, they are quite experienced after last year’s injury-plagued season.

101.85: The 2017 pass efficiency defense rating for the Eagles, a figure good for third best in the country. The team returns Will Harris and Lukas Denis, the starting safety tandem and a large portion of that success from a year ago. Both Preseason All-Americans, the two combined for 166 tackles, eight interceptions, and four fumble recoveries in 2017 and will lead a BC secondary thats questions lie at the corner position. Hamp Cheevers is set to start at right cornerback after playing 12 games last season, and Taj-Amir Torres, who started twice in 2017, will bring experience to the Eagles, but it’s unclear who will play nickel, and who will step in if either Torres or Cheevers goes down. The two backups, Brandon Sebastian and Tate Haynes, are both redshirt freshmen with zero career games played between them.

After a glance at the depth chart, it’s obvious that BC’s offense is set, with an experienced offensive line and a good blend of talent and experience at all the skill positions. The questions arise on the defensive side of the ball, where there is a great deal of uncertainty surrounding the interior defensive line and cornerback play. But, like every season, injuries and poor play can change the scope of the season. A roster’s strengths and weaknesses can really only be evaluated on a week-to-week basis, particularly at the college level. 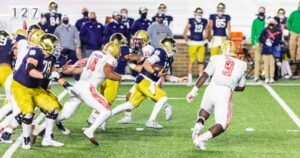