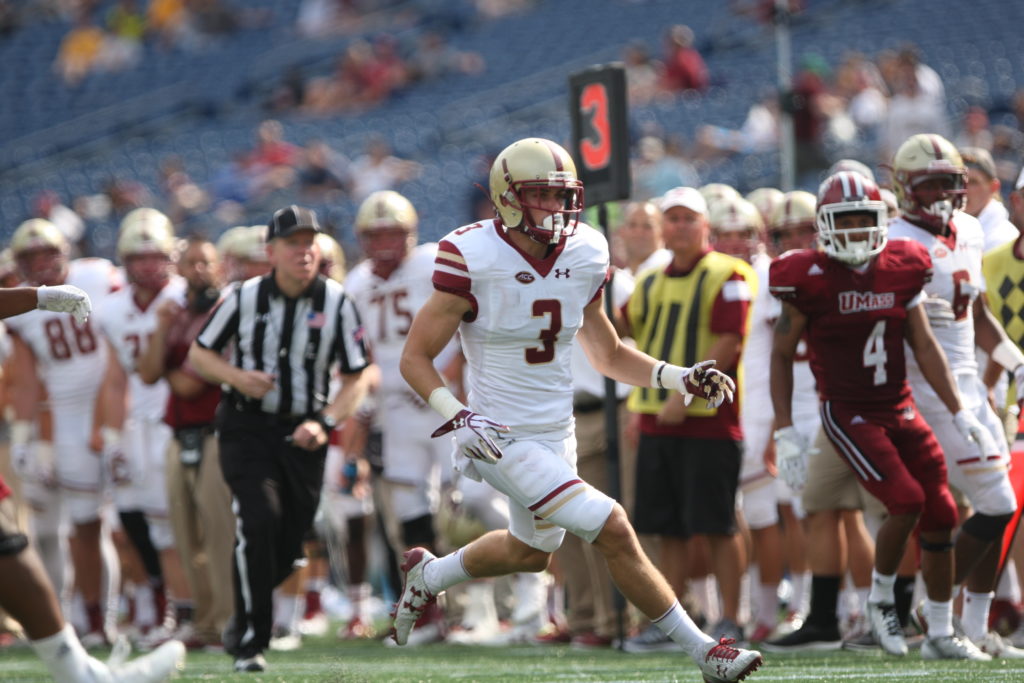 It’s finally time. After a seemingly endless offseason for Boston College football, the preseason hype will finally give way to the actual gridiron on Saturday afternoon. Steve Addazio’s team has given fans a lot to be excited about as a new season gets underway. Many fans foresee this Eagles team having its best campaign since Matt Ryan last graced the Heights in 2007. The experts seem to agree, as BC comes in at No. 34 in the AP Top 25’s Preseason Poll, A.J. Dillon has cemented himself as a Heisman trophy candidate, and multiple news outlets have picked the Eagles as a darkhorse to upset the apple cart in the ACC.

However, this season brings with it an unprecedented level of expectations. Fans aren’t just hoping for Addazio’s crew to break the “7-6 curse”—they’re counting on it. How BC handles this new role will play a part in determining its success this year. A brutal schedule awaits, but first on the slate is Massachusetts (1-0), a team coming off a dominant win last week. A better team on paper, this will be the Eagles’ first test with these aforementioned expectations. Alumni will be locked and loaded, and these fans are anticipating nothing less than a commanding victory.

1,589: The number of yards that sophomore running back A.J. Dillon rushed for last season. He trailed only Lamar Jackson in this category in the ACC, and this number was good for 477 yards more than the next-ranking conference running back. The New Bedford, Conn. native will clearly be the workhorse this season, but he is looking to improve the finer points of his game as well. The transfer of Jonathan Hilliman should vault Dillon into more of a three-down role this season after notching zero catches last season. This improvement as a receiver would be huge for the passing game, giving Anthony Brown a much-needed safety valve.

1: The number of teams in the ACC whose leading passer, rusher, and wide receiver were all freshmen last season. Brown, Dillon, and Kobay White earned this distinction for BC, and all of these guys are seeking to make strides from Year One to Year Two. Brown will be an X-factor at QB, coming off an injury-shortened 2017 campaign. He was rapidly improving as the season went on. In the five games leading up to his injury, Brown threw six touchdowns to just one interception, adding 175 rushing yards in a 4-1 stretch that included three conference victories. Reports out of camp show Brown looking fresh and fully recovered from his knee surgery, and fans are happily awaiting his return to the field.

18: The number of interceptions that the Eagles’ defense recorded last season, the top total in the ACC. The secondary was a difference maker for BC all of last season, and it starts with the fantastic pair of safeties. Lukas Denis picked off seven passes of his own last year, and Will Harris recovered four fumbles. They both clock in as Preseason All-Americans, and they will lead a secondary that lost outstanding corners Isaac Yiadom and Kamrin Moore. It will be up to Hamp Cheevers and Taj-Amir Torres to pick up the slack at corner this season.

63: The number of points the Minutemen put up in their rout of Duquesne last week. Senior quarterback Andrew Ford posted a 22-4 touchdown-to-interception spread last season, and he picked up where he left off in this one with two touchdown tosses. It was an all around dominant performance for the Minutemen, as they scored eight touchdowns and picked off five passes. Albeit against an FCS opponent, 63 points is nothing to scoff about. BC will need to lock down playmakers like Ford, Marquis Young, and Andy Isabella in its upcoming contest.

5: The number of games that UMass has won in its last seven tries after an 0-6 start to 2017. Head coach Mark Whipple found a way to motivate his players after a winless start, and he will surely fire up his team to sniff an upset against BC on Saturday. In this seven-game stretch, UMass is averaging over 39 points per game, so the Eagles cannot let complacency set in against this talented side.

1978: The last year in which UMass defeated BC. Nine games have been played between these teams since then, and the Eagles have outscored the Minutemen, 294-110, in these matchups. The in-state rivalry has been fairly one-sided in its history, seeing BC lead the all-time series 21 to 5. With this being said, however, Whipple leads a streaky side into Alumni that may very well be the best he’s had at Amherst.

These two teams last met on Sept. 10, 2016, where BC posted a 26-7 victory. The game was played at Gillette Stadium in Foxborough, Mass. and graduate transfer Patrick Towles led the Eagles offense with two touchdown passes to Jeff Smith, with Jonathan Hilliman tacking on a rushing touchdown as well. Harold Landry, Zach Allen, Connor Strachan and Co. Combined for eight sacks of QB Ross Comis in the tilted affair.

BC is an 18-point favorite for a reason. The Eagles are clearly the better side on paper, but to win this game, they will need to limit mistakes on the offensive side of the ball. Turnovers are the great equalizers in seemingly lopsided matchups. If Brown shows any jitters and is sloppy with the football, BC could be in for a rude awakening. The Eagles should ease Brown back into the fold as much as possible, relying on Dillon to shoulder the load and make the most out of every possession.

On the defensive side of the ball, stopping this dynamic Minutemen offense starts with the defensive line. Defensive ends Zach Allen and Wyatt Ray need to get pressure on Ford, making him uncomfortable in the pocket. Combined with a crowd that’s sure to make it tough on UMass, BC needs to put this game out of reach early. Letting UMass hang around in the second half could let doubt creep in to the minds of players and fans. Scoring early and scoring often will be a recipe for success and should be enough to vault the Eagles into the win column to start the season.