Home » BCPD and BUPD Square Off In Lip Sync Battle 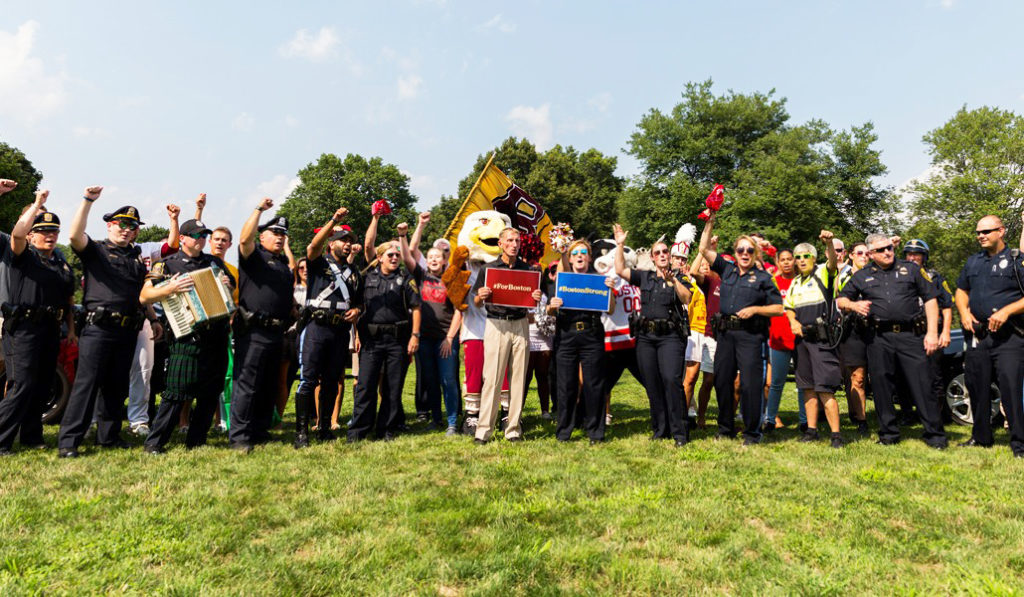 BCPD and BUPD Square Off In Lip Sync Battle

The Boston College and Boston University Police Departments teamed up last month to participate in the Law Enforcement Lip Sync Challenge, with a Boston-themed “Battle of Comm Ave.” between police officers and other community members from the two rival schools.

The challenge began early this summer, when Deputy Alexander Mena from Bexar County, Texas recorded himself lip syncing the Kumbia Kings’ “Fuiste Mala” in his car, and has since spread across the country, with hundreds of departments participating nationwide.

“There’s these little challenges that pop up on social media that police departments and police officers get involved in to really kind of humanize the profession, to kind of humanize the men and women who wear the uniform,” said BCPD Lt. Jeffrey Postell, who—along with student interns—wrote the script for the video.

“We had folks within our … own community here that had reached out to the police department—to me—and said ‘You know, we’ve seen a hundred of these police departments around the country do these videos, when is BC going to do one?’” he said. “And I’m not one to back down from challenges.”

When thinking about how his department should partake in the social media phenomenon, Postell wanted to do something that hadn’t been done before—something that would make BCPD’s video stand out.

“I just love the camaraderie and the rivalry of college sports, so I said, ‘You know what, I have not seen a department do an actual battle. We’ve heard them say lip sync challenge, but we have not heard them do a lip sync battle,’” he said. “And so I said, ‘If the Boston College Police Department is going to do a lip sync challenge—or battle—there’s no better department to battle than Boston University because of the rivalry between BU and BC.’”

When considering which songs to include, Postell again thought it would be important to do something different than any other police department had done before, ultimately deciding to do songs that represented the Boston community.

Postell pitched the idea to the BCPD student interns, from whom he took ideas about what the video should look like, and then he began to write the script. After about a month of planning, the two departments finally came together on what Postell described as a “scorching hot” day in August to film.

The video begins with a duel between Postell and BUPD Sgt. Patricia Murphy, who each take turns mouthing the words to Broadway’s “Anything You Can Do (I Can Do Better).”

“It kind of gives storyline to the anything BU can do BC can do better, and vice versa,” Postell said. “That led it into throwing down the gauntlet, if you will, of the challenge of who rocks the song better—whether BC doing ‘Shipping Up to Boston’ by the Dropkick Murphys or BU doing ‘Dirty Water’ by the Standells.”

After mouthing the words and dancing along to those two Boston classics, the two departments come together in the end of the video for a lip syncing of “Sweet Caroline,” led by BCPD Chief William Evans and BUPD Chief Kelly Nee, and the video ends with a “Welcome back to Boston” message for returning BC and BU students.

In addition to Evans and Nee, notable appearances in the video include campus minister Rev. Don MacMillan, S.J., BCPD Staff Sergeant Hasnain Ali, Eagles defensive back Will Harris, and Officers Michael and Richard Cabral—identical twin brothers who work for BCPD and BUPD, respectively.

As of Aug. 28, “#LipSyncChallenge: Battle of Comm Ave.,” which was filmed and edited by the Office of University Communications, had been viewed over 658,000 times and had been shared over 14,000 times on various social media platforms.

“It would be fair to say that our video is popular,” Postell said. “And we’re very proud of it. I think it was fun for us to do, we enjoyed doing it—we hope that the viewers get a kick out of it.

“The real important thing is that it showcases a lot. It showcases our department in a sense that is positive, and human, if you will. It showcases the pride and professionalism we have in our profession, and it really shows the love that we have for not just our individual institutions and communities, but the greater Boston area, because this is a great place. So that was our goal, and I think we accomplished it.”

BU BCPD
How Did You Survive the Heat Wave This Week?
New Undergrad Admission Director Gosselin Focuses on Diversity, Yield