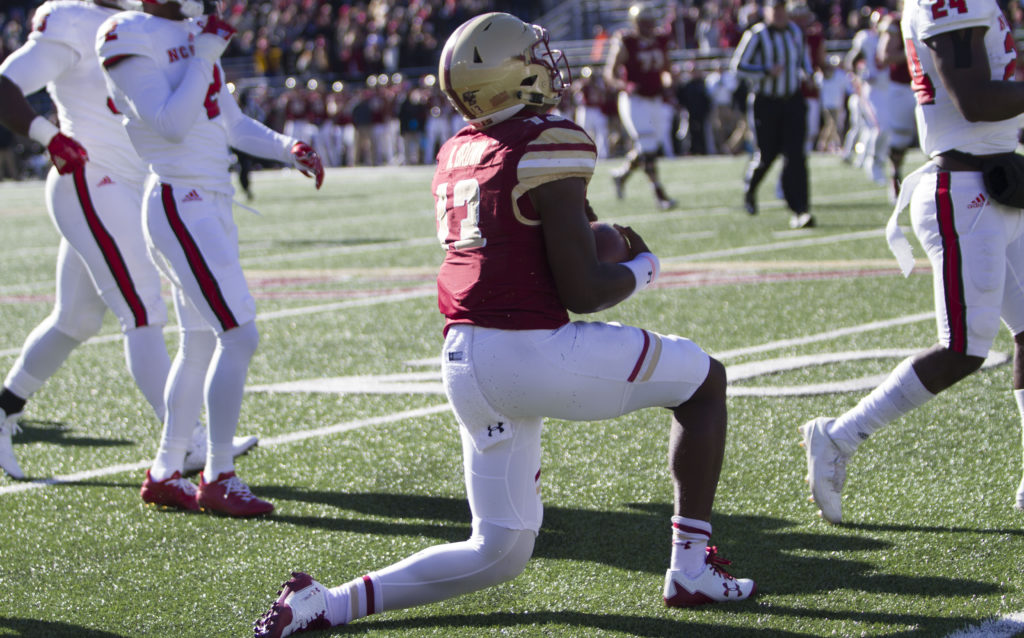 Since Boston College head football coach Steve Addazio was hired back in 2013, the Eagles have started eight different quarterbacks—five of whom have recorded 40 or more pass attempts in a season.

There hasn’t been any kind of consistency in the quarterback room since the days of Chase Rettig, ironically the first signal caller that Addazio worked with at BC. From 2010 to 2013, the four-year starter accumulated 8,253 passing yards, all while posting a 52 to 39 touchdown-to-interception ratio. His numbers weren’t extraordinary, but he did more than enough to open up the Eagles’ playbook.

After the 6-foot-3 gunslinger graduated and tried his hand at making an NFL roster, BC transformed into a one-dimensional team. In fact, over the course of the next three years, the Eagles ranked among the top 15 worst passing offenses in the entire country. During that span, BC averaged a meager 128 yards per game through the air. Even more staggering, its quarterbacks were completing just 50.5 percent of their passes—many of which were short to intermediate throws.

There’s something to be said about young guys behind center needing time to develop, especially in the college ranks. But Addazio went from one “gunslinger” to the next, at times leaning on graduate transfers to keep the program somewhat competitive. Just think about this. After Rettig left, BC threw six quarterbacks into the fire the ensuing three seasons. On the other hand, the best teams in the ACC stuck with one during that same time frame.

Now, it’s important to note that injuries heavily influenced the Eagles’ variability at quarterback. Of those six signal callers, three—Jeff Smith, John Fadule, and Troy Flutie, all of whom ended up switching positions—were forced into action because of Darius Wade’s season-ending ankle injury at Florida State in Week Three of the 2015 season. But patching the Eagles’ long-standing quarterback problem with graduate transfers—nothing more than a simple band-aid—prolonged the team’s offensive deficiencies.

The combination of Tyler Murphy, Darius Wade, Smith, Fadule, Flutie, and Patrick Towles recorded a total of 4,832 yards and 34 touchdowns from 2014 to 2016. To put that in perspective, Clemson’s Deshaun Watson threw for 4,593 yards and 41 scores in his junior season alone. Murphy gets a free pass here, due to the fact that the Florida graduate transfer was largely used as a spread-option quarterback. But from there on, the rest of the guys hardly looked the part of ACC-caliber signal callers.

Without a passing game, BC was predictable and inefficient, averaging 21.4 points per game in the aforementioned three-year span. Last season, the Eagles turned the corner. And after Saturday’s Week One blowout victory over Massachusetts, it’s starting to finally look like BC has the aerial attack it needs to compete with the big boys—at least, it better hope it does.

The Eagles’ season rides on the success of redshirt sophomore Anthony Brown. Plain and simple, the team will only go as far as he takes them. All offseason, the talk has surrounded Brown’s best friend and sidekick, running back A.J. Dillon—and for good reason. The ACC Rookie of the Year racked up 1,256 rushing yards in the final seven games of the season, ultimately finishing with 1,589 yards on the ground, second only to reigning Heisman Trophy winner Lamar Jackson in the ACC rushing rankings.

Still, the fact of the matter is that the sophomore could surpass the 2,000-yard mark and record 20 touchdowns this year, and the Eagles could end up clocking out with six or seven wins. In the ACC, a running back can only do so much to alter the course of his team’s season. You don’t have to look any further than Chestnut Hill to confirm this accusation. When Andre Williams rushed for 2,177 yards and 18 touchdowns, turning heads across the nation en route to Heisman Trophy finalist honors, BC managed just seven wins, dropping the final two games of the season—including the AdvoCare V100 Bowl. The Eagles rounded the 2013 campaign with a 7-6 mark, the same record the program has posted four of the past five years.

It’s not just BC either. Looking back at the top three teams from both the Atlantic and Coastal Divisions from last season, as well as the two years before that, only 2017 Georgia Tech and 2015 Pittsburgh finished the season below 72nd in passing offense. And each year at least four of those teams ended up inside the top 60. It’s a national phenomenon in a day and age when defensive flags are thrown by the series.

Last summer, Addazio adapted, albeit a few years late. During the 2017 ACC Kickoff Media Day, the tenured Eagles coach emphasized that his team was going to play faster than ever before, expanding upon their 75-play Quick Lane Bowl victory over Maryland—a statistical anomaly for a BC offense that had scored 30-plus points twice all regular season. In Year Five, Addazio lived up to his word. BC ran 76.8 plays per game, nine more than the year before and the 25th-most in the country. At first, the change in pace made no difference on the scoreboard as the Eagles averaged just 16.3 points per game—its lowest output since the 1978 season, a year in which the program limped to an 0-11 record. But when Dillon broke loose, the offense, notably the passing game, followed.

A week after the sophomore tailback rumbled past Louisville for 272 yards and four touchdowns, Brown recorded three scores of his own at Virginia, through the air that is. Not only that, but he also completed 19-of-25 pass attempts for a career-high 275 yards. He was hitting all kinds of throws, slants, flea-flicker deep balls, play-action rollouts, you name it. Brown’s precision enabled offensive coordinator Scot Loeffler to mix up the offensive scheme. The second-year assistant seamlessly alternated hard-nosed rushing plays with jet sweeps, end arounds, and the play-action pass. What might appear vanilla was overwhelmingly calculated, and Brown was Loeffler’s centerpiece.

The redshirt sophomore had his limitations, though. In his 10 starts last season, Brown failed to string together a pair of outings where he completed more than half of his passes. His rating fluctuated game-by-game, leaving many to speculation when he went down with a season-ending ACL tear against North Carolina State last November. Fortunately for BC, Wade reassured fans and analysts around the country that Loeffler’s offense really did work.

The backup quarterback, who before 2017 had played just 12 games and completed just 33 of his 69 career pass attempts, went on to guide the Eagles to a 2-1 record in the final three games of the season, all while logging a 62.9 completion percentage, 511 yards, and a trio of touchdowns. The offense was built for mobile quarterbacks like Brown and Wade—for the first time in the Addazio era, there appeared to be a long-term plan at the position.

All Brown had to do was get back on the field and the job was his. No quarterback controversy or competition—none of that. And boy, did he recover. The redshirt sophomore opened the 2018 season, tossing four touchdowns for a whopping 279 yards, both career highs, in one half of play, as BC steamrolled over UMass. Following the game, Addazio said that the quarterback exceeded his own expectations, and it’s safe to say that everyone can second that statement themselves.

Some may point to the fact that BC was playing the Minutemen—a team that’s a putrid 14-58 since joining the FBS—but lighting up UMass actually helps his case. In 2017, the Minutemen ranked 36th in the nation in pass defense, allowing just 204.7 yards per game. Not only that, but UMass opponents only completed 53 percent of their passes. Head coach Mark Whipple lost a a stud strong safety in Jesse Monteiro, but returned both of his starting corners from the year before. Brown just balled out.

Stats aside, the redshirt sophomore looked better than he ever has in a BC uniform. Despite donning a leg brace, the Cliffwood, N.J. native was beaming with confidence. With no restricted mobility, Brown glided outside the pocket and even scrambled on occasion. Whether it was hitting Travis Levy with a bullet on a wheel route or lofting a 25-yard pass down the sideline for Kobay White, the underclassman was proving that he could make the toughest of throws, placing the ball where no defensive backs—UMass or not—could make a play on the ball.

Brown finished the day 15-of-21, and if not for a couple drops, his numbers could have been even more impressive. Above all else, Brown’s ability to connect with his receivers downfield should have been the biggest vote of confidence for the program. Last season, Brown struggled to pull off the deep ball—not because of arm strength, but because of his accuracy, or lack thereof. On Saturday, he was 6-of-7 on passes 20 or more yards. That doesn’t just happen by chance.

Of course, it’s yet to be seen if he can replicate this kind of performance on a weekly basis. That will be the true test for the Eagles’ offense. It takes no analyst to figure out that Loeffler’s scheme is built on play-action. If Brown can’t complete passes, especially those downfield, the operation is doomed. Teams will crowd the box, and BC will return to its one-dimensional self, helplessly riding Dillon the rest of the way.

BC doesn’t have the talent of that of a school like Clemson or a Florida State, the Atlantic Division’s powerhouses. According to 247Sports.com, Addazio reeled in the 71st-best 2018 recruiting class in the country—in other words, the worst in the ACC. But that’s not how the Eagles win. Ever since they left the Big East, they have thrived into turning three-star recruits into four-star caliber players. Maybe Brown’s one of the guys, maybe he’s not.

But he is the perfect candidate to run Loeffler’s offense, a meticulous unit that has the potential to render prospect ratings irrelevant. If he can spread the ball like he did on Saturday, fit passes in tight windows, stretch the field, and keep the turnovers to a minimum, BC might just be the dark horse pundits are proclaiming it to be. Anything less could spell doom for a program that’s teetering the line between good and great—and at the very worst, reset the quarterback carousel.