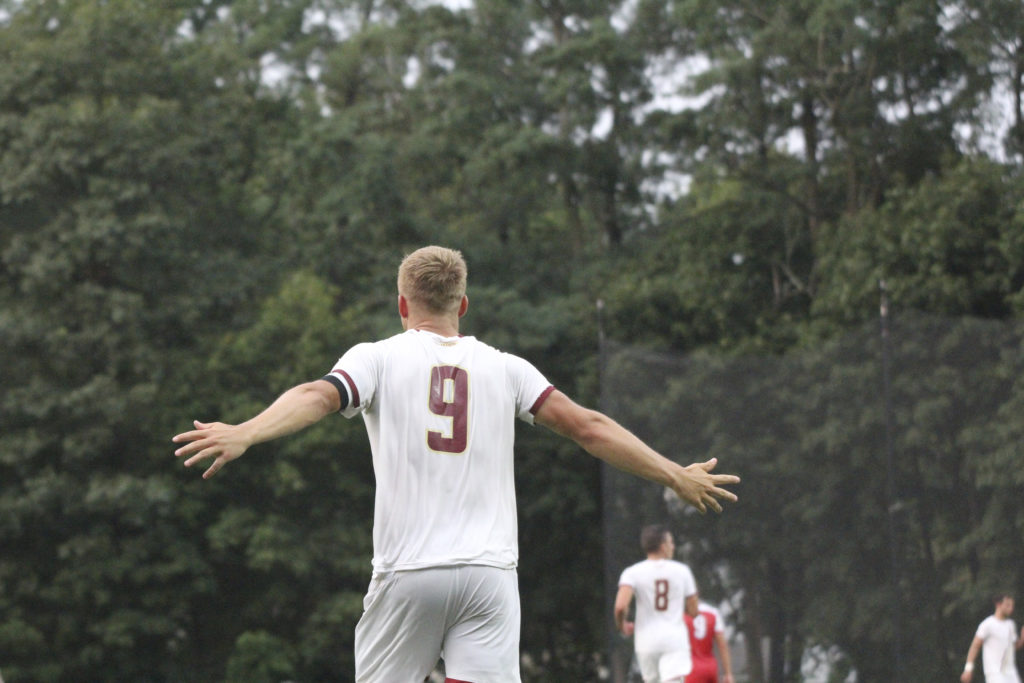 After having back-to-back matches result in draws, Boston College men’s soccer was not going to squander an opportunity to take an early lead during Friday’s night game against Clemson, a team that the Eagles hadn’t defeated since 2009. Head coach Ed Kelly knew that the ACC opener was “big time”—in his eyes, a win was necessary, especially following last year’s dismal performance in conference play.

In the 20th minute, Callum Johnson sneaked past a defender and graciously streaked by the remaining Clemson defensive unit. The midfielder beautifully touched the ball to Simon Enstrom, who sent right back an equally impressive pass, done so with impeccable finesse. The exchange was like clockwork.

Johnson finished the give-and-go drive down the right side with his first goal of the season—one that put an end to BC’s six-game scoreless streak against Clemson. While Enstrom only provided the assist for Johnson’s goal, the senior would have his hands all over the rest of the match in BC’s 3-2 long-fought victory over Clemson.

The crowd came in numbers for the primetime matchup and the players began to truly feed off the energy, as the match proved to be rather chippy from the get-go. It’s a miracle of its own that the game even finished with the amount of stoppages that followed the incessant foul calls. A scary moment occurred in the midst of such vehement physicality, just 12 minutes into the first half when BC (2-0-2, 1-0 Atlantic Coast) midfielder Joe Kellett collided with Clemson (3-2-0, 0-1) goalkeeper Jonny Sutherland. Kellett had an open path to the goal and blew past two defenders, only to met by the waiting protection of Sutherland.

Approaching the 24-minute mark, tensions seemed to reach a definitive high when Clemson’s John Murphy was given a yellow card. Luckily for BC, it was able to maintain its composure, as well as its early 1-0 lead heading into the half. But this lead was short-lived, as a great momentum shift occurred when Kellett received a yellow card in the 58th minute, which was rapidly followed by a subsequent Lasse Lehmann yellow.

The latter resulted in a penalty kick score by Clemson’s Malick Mbaye, the junior’s first goal of the season. The Tigers utilized the Eagles’ bookings to their advantage, as they consistently held onto a strong offensive attack throughout much of the early second half. Yet another yellow card on BC’s Carlos Dulcey simply furthered the Clemson offensive push. Eventually, the Eagles’ defense cracked: In the 65th minute, Sindri Bjornsson lofted a corner kick into the box that found the foot of Patrick Bunk-Andersen. Without hesitation, the 6-foot-2 defender ripped a shot past BC goalkeeper Antonio Chavez Borrelli.

The Eagles weren’t done just yet. In fact, Enstrom was ready to pick up where he left off with his spectacular pass on the early one-two connection by scoring his own goal. The equalizer came in the 71st minute off a show-stopping header, courtesy of a Kristofer Konradsson corner. The scoring play marked Enstrom’s fourth goal of the season, and he wasn’t stopping anytime soon.

After two near goals, Enstrom was visibly frustrated between his own botched attempts and the endless foul and yellow card calls. His anger was all for naught, though. Enstrom once again found the ball at his feet in the 88th minute and quickly worked his way past two defenders. Then, from just inside the box, the Eagles’ leading goal scorer let an absolute laser rip through the defense and it continued to hurtle past Sutherland on a bee-line for the back of the cage. When Eagles fans saw the ball hit the net, they went ballistic and he himself gave into pure emotion by tearing off his shirt and joining in with some cheers of his own.

“I felt sharp,” he said. “[The first goal] gave me confidence so that when the final goal came my way I was ready. It was an unbelievable night, and one that you never forget.”

With three total points, Enstrom jumped to sixth on BC’s all-time scoring chart. He now has 27 goals and 62 points to his name, not to mention two game-winners this season alone. Almost single-handedly, he has his team trending in the right direction. And his coach couldn’t be prouder—not just in the senior, but the entire Eagles squad.

“It was a great game—a great game to win. It was an absolute dogfight,” Kelly said.

All last season, BC recorded just three goals against ACC competition. On Friday night, the Eagles met that mark against a program that has dominated them, year in and year out, and was even voted as the second-best team in the conference’s preseason poll. One game certainly doesn’t dictate a season, but, for the moment, the Eagles have appeared to right the ship, and Enstrom is the one piloting the comeback, game by game. 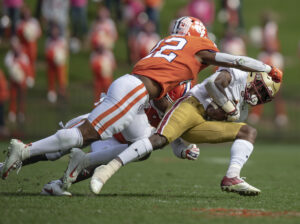 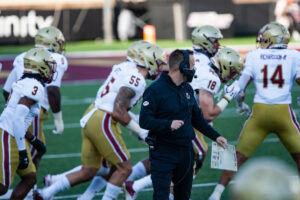