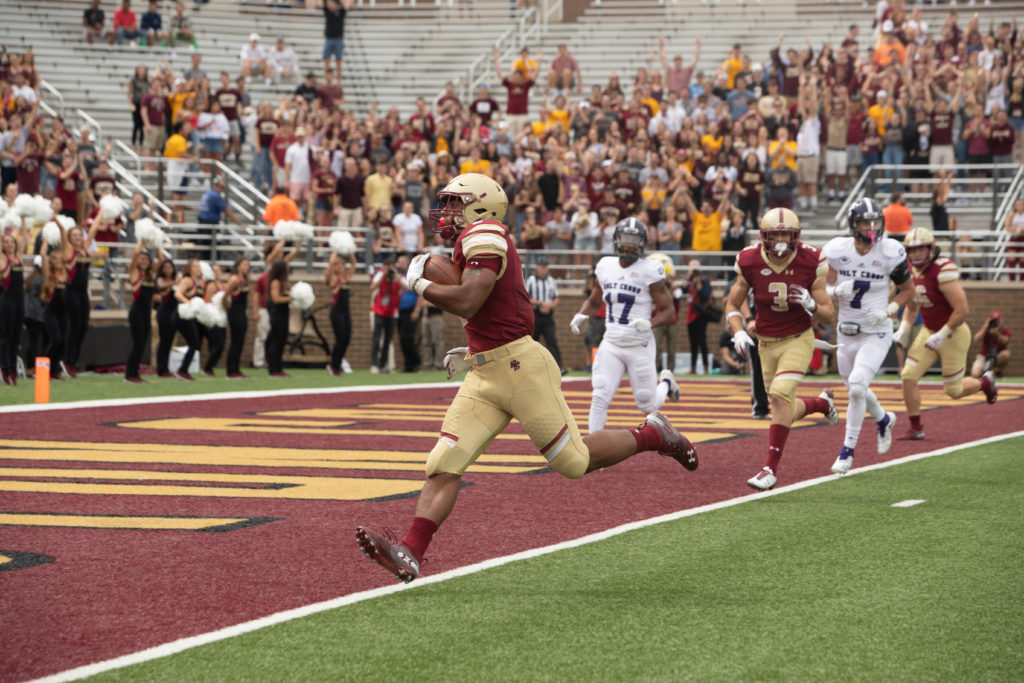 Boston College football entered Saturday’s reunion with Holy Cross as 42.5-point favorites. Not only that, but according to ESPN’s Football Power Index, the Eagles had a 99.5 percent chance of defeating their longtime New England rivals. All signs pointed to BC improving to 2-0 to start the year—something the program had only done twice in the Steve Addazio era. The question was, just how lopsided would the inter-division matchup be?

A.J. Dillon answered that on the first play of the afternoon. Anthony Brown took the snap and handed the ball off to the Heisman Trophy candidate. Without hesitation, Dillon made a beeline for the outside. In large part because of the guys up front, all the sophomore had to do was beat Crusaders cornerback Josh Hicks. Dillon succeeded with ease, gliding by the outstretched arms of the diving 6-foot defensive back. Rumbling all the way to the Holy Cross 22-yard line, the ACC Player of the Year marked the start of what was a statistical anomaly of a quarter.

After failing to record a rushing touchdown in BC’s season-opening rout of Massachusetts, Dillon reached the end zone on the ground three times in the first quarter. By the time he and Brown clocked out—the 1:13 mark in the opening frame—he had already racked up 149 rushing yards on just six carries. In other words, the sophomore averaged 24.8 yards per rush. As a whole, the offense moved the sticks without any sort of resistance, stringing together three-straight drives of 60-plus yards—all of which spanned less than five plays and 80 seconds. When the second quarter rolled around, the game was all but over. A mixture of starters, second-teamers, and third-stringers finished the job, polishing off a 62-14 blowout.

Prior to Saturday, the two schools hadn’t squared off since 1986. As the rivalry faded, so did the similarities between the Massachusetts teams. BC (2-0) developed into a premier Division One program, and the Crusaders (0-2) transitioned to the FCS. The disparity—greater by the season—was apparent from the moment the teams stepped on the field.

Whenever Dillon received a handoff, there was a sea of green in front of him. Of his six carriers, two went for 50 or more yards. Following his game-opening 54-yard rush, Brown completed a 17-yard play-action pass to Tommy Sweeney—the tight end’s first reception of the season. Moments later, Dillon waltzed into the end zone for a seven-yard touchdown. A minute and 14 seconds in, BC was on the board.

As if that wasn’t fast enough for Addazio and Co., the Eagles’ next drive took all of 14 seconds. Once again targeting the sideline, Dillon veered toward the right sideline, broke two tackles—the second of which he evaded with a spin move—and galloped downfield, pointing to his blockers. Approaching the 10-yard line, C.J. Lewis leveled Grant Holloman, allowing Dillon to skip over the Holy Cross defensive back, en route to the end zone.

Like clockwork, the Eagles trotted back onto the field after a Crusaders three-and-out and pitched together another touchdown drive. Running the jet sweep, Jeff Smith infiltrated Holy Cross territory, picking up 20 yards in the process. On the very next snap, Brown dialed up a 26-yard pass to Kobay White. If he hit the redshirt sophomore in stride, it would have been a touchdown, but the slight misfire didn’t cost the Eagles. At half-speed, an untouched Dillon jogged past the goal line for his third touchdown of the quarter. He was on pace for 600-some yards and 12 scores—a ridiculous projection, of course—but his day was already over.

Right when he got to the sideline, Addazio pulled the sophomore running back over to the side and told him that his work was done.

“He’s a young guy—you know young guys, they want to play,” the sixth-year Eagles coach said. “They want to do their thing, they want to score touchdowns, and I get that. He probably could have ran for quite a few yards today. But it’s a team game for us, and he’s a team guy.”

Brown, who attempted just two passes in his quarter of action, was also told to take a seat. After the game, Addazio tossed around the idea that maybe he took some of his guys, Brown and Dillon included, out of the game too early. Regardless of when he pulled them, the Crusaders weren’t staging a comeback.

In fact, Holy Cross tallied a mere 57 yards of total offense in the first half. Reluctant to test BC’s hall-hawking secondary and perhaps content to speed up the lopsided affair, head coach Bob Chesney stuck to the ground. Holy Cross ran the ball seven times before throwing its first pass. It’s not like the rushing attack was working either.

When all was said and done, the Crusaders finished the game averaging 2.98 yards per carry. Eventually, Holy Cross turned to the air, but after a few series, decided to alternate quarterbacks Emmett Clifford and Geoff Wade. Neither had success, completing a combined 12 passes for just 66 yards. Essentially, BC was gifted with a boatload of offensive reps—many of which Addazio used to his advantage.

E.J. Perry took over for Brown at the end of the first frame and played well into the third quarter before giving way to third-string gunslinger Matt McDonald. With Travis Levy and David Bailey in the backfield, Perry was efficient, completing nine of his 12 pass attempts for 97 yards and a pair of scores. His first touchdown pass was a dart to Ben Glines near the sideline. The wide receiver-running back hybrid hauled in the reception, wrestled his way out of the arms of Josh Hicks, and dashed into the end zone for six. The latter was a 33-yard strike to a streaking C.J. Lewis, two drives removed from a one-yard Davon Jones touchdown run.

But before that pass and catch came one of the more exhilarating highlights of the afternoon. Following a 15-yard Richie DeNicola reception—at the time, the Crusaders’ biggest play of the game—Clifford scrambled outside the pocket, stared down Blaise Bell, and hurled a pass toward the sideline with less than a minute remaining in the half. Hamp Cheevers was all over the route. The fiery cornerback jumped the pass and returned the interception 81 yards to the house. For the second-straight game, the Eagles entered intermission hot off a pick-six.

As the contest progressed, BC eased its foot off the gas, all while upping its scoring output. Matt McDonald replaced Perry near the conclusion of the third quarter and tossed touchdowns to tight end Hunter Long and wide receiver Noah Jordan-Williams—both of which were firsts for the underclassmen targets.

Sandwiched in between those scoring plays were a pair of blocked Eagles punts. On two separate occasions, Holy Cross steamrolled past BC’s punt formation and stuffed Grant Carlson. To make matters worse for the Eagles, both times, the Crusaders scooped up the loose ball and barrelled into the end zone for a touchdown.

Coupled with a John Tessitore missed extra point, the blocked punts rounded out another poor special teams performance for BC. Still, in a 48-point rout, those kinds of plays look like nothing more than a minor blemish.

After the game, Dillon—the winner of this year’s Eddie O’Melia Trophy, awarded to the most valuable player of the BC-Holy Cross matchup—was asked about his performance, in particular his 74-yard touchdown run.

Dillon’s five quarters of missed playing time haven’t done his Heisman odds any favors, but it’s clear that his eyes are on a different trophy. 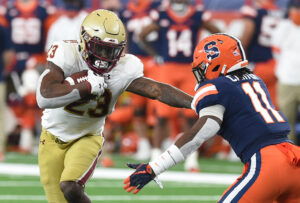