Outside the double doors of an atrium leading to Google’s Cambridge headquarters, in the center of the MIT academic nucleus, the sounds of derailleurs clicking into gear and handlebar bells ringing signal an encouraging transition in the mobility soundtracks of urban spaces all around the world. The City of Boston has embraced—albeit slowly—the potential benefits of this modal shift from driving to cycling, particularly as it works to achieve the objectives established in its Go Boston 2030 transportation initiative. Brandale Randolph acknowledges the power of life on two wheels, not only for the environment but also for individuals who could be empowered through the employment opportunities that he is creating at The 1854 Cycling Company.

The 1854 Cycling Company is a premium bike manufacturer based in Framingham, Mass., recently named a 2018 finalist for MassChallenge’s startup accelerator program. It acts as a social enterprise geared toward providing living wages to previously incarcerated individuals returning to the job market. The company also produces cycling apparel and has built up a compelling urban aesthetic and brand voice, as the name harkens back to the year that the Anti-Slavery Society first met and the subsequent burning of the United States Constitution on July 4, 1854 by abolitionist William Lloyd Garrison in protest of American slavery practices. The company has firmly positioned itself as an essential link to the surrounding community and an agent for social justice.

“The market I need to hit loves our story, and they love the fact that who we’re trying to help is someone that has been looked over,” Randolph said. “Embracing our story and not hiding from it has separated us in terms of how we brand ourselves in the future. … I don’t believe we’re just going to be a bicycle company in five years. I believe we’re going to be a brand.”

Prior to the company’s inception, Randolph graduated from the Wharton School at the University of Pennsylvania and took up a hedge fund job in Los Angeles, only to move away after the 2008 stock market crash. Having grown up in Louisiana, Randolph claims to have acquired a disregard for authority and conventional practice that primed him early on for entrepreneurial activities.

“The only thing I saw in my future was having my own business,” said Randolph. “I realized early on that I wasn’t really known to work for other people. I can, and I have, but entrepreneurship was definitely something I started to look into.”

Despite being on track to having a lucrative professional career, Randolph felt a responsibility to assist people who were less fortunate, specifically formerly incarcerated individuals, in acquiring a new dynamic technical skillset, achieving financial security, and avoiding relapse into criminal behavior. The opportunity to effect change from the bottom up presented itself when Randolph moved to Lubbock, Texas, where his wife was finishing her Ph.D. studies. There, he began by starting his own social justice nonprofit called Project: Poverty, while also offering employment guidance and teaching financial literacy to inmate cohorts at the Lubbock County Detention Center. Randolph hopes that by providing workers with living wages, the benefits will trickle down to their families and support the education of future generations.

“The problem that I think a lot of people have is that they believe that their job is their identity,” Randolph stated. “Your identity ultimately is your purpose and not necessarily the job title that you have.”

As the company continues to grow and receive recognition for its modus operandi, Randolph remains faithful to his company’s purpose and the human elements of his business. By crafting a delicate balance between commercial venture and social venture—a challenging marriage—Randolph hopes that The 1854 Cycling Company will become a positive stepping-stone for employees to reach their professional aspirations. Listening attentively to each worker’s exigencies and aligning them with the growth of the business has brought Randolph closer to this purpose. Ultimately, he estimates that the company will have full command of the production process, from manufacturing to assembly and delivery to customers, by late 2019.

“This [purposeful growth] only comes from listening to my employees and being aware of what they’re going through,” Randolph said. “I believe that having a moral compass is what a lot of businesses lack.”

Dissociating the true signal from the noise in addressing the issue of poverty exists at the core of what the company aims to do. In his 2014 TEDx Talk “Stop throwing breakfast sandwiches at the poor,” delivered at Texas Tech University, Randolph presented this approach by way of an anecdote. One morning while entering a fast-food restaurant, he noticed a poor man asking patrons for spare change. After some thought, Randolph offered to give the young man a dollar upon exiting the restaurant if he watched after the bike he had parked outside. But before Randolph even made it past the entrance, a patron jostled past him and threw a breakfast sandwich at the poor man, explaining that he sensed any money given to the man would be used to purchase drugs. The breakfast sandwich unraveled in the air and its contents spilled onto the pavement.

The scene was troubling for Randolph, who felt that the poor man’s experience was not an isolated one, but rather endemic among those without steady employment and proper housing. That moment outside the fast-food restaurant, as the sun rose above the horizon to greet shopkeepers and workers opening their storefronts around town, proved to be the catalyst for Randolph. He had found a purpose not only for his own life but also for the change he hoped to effect in the lives of those employed through The 1854 Cycling Company.

“A well-taught lesson rarely is forgotten,” Randolph said as he walked off the stage at TEDxTexasTechUniversity. “Do, give, teach. But do so with love, and in love with humanity.” 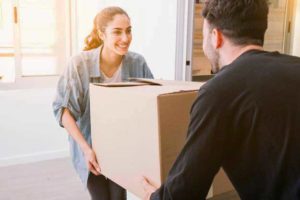