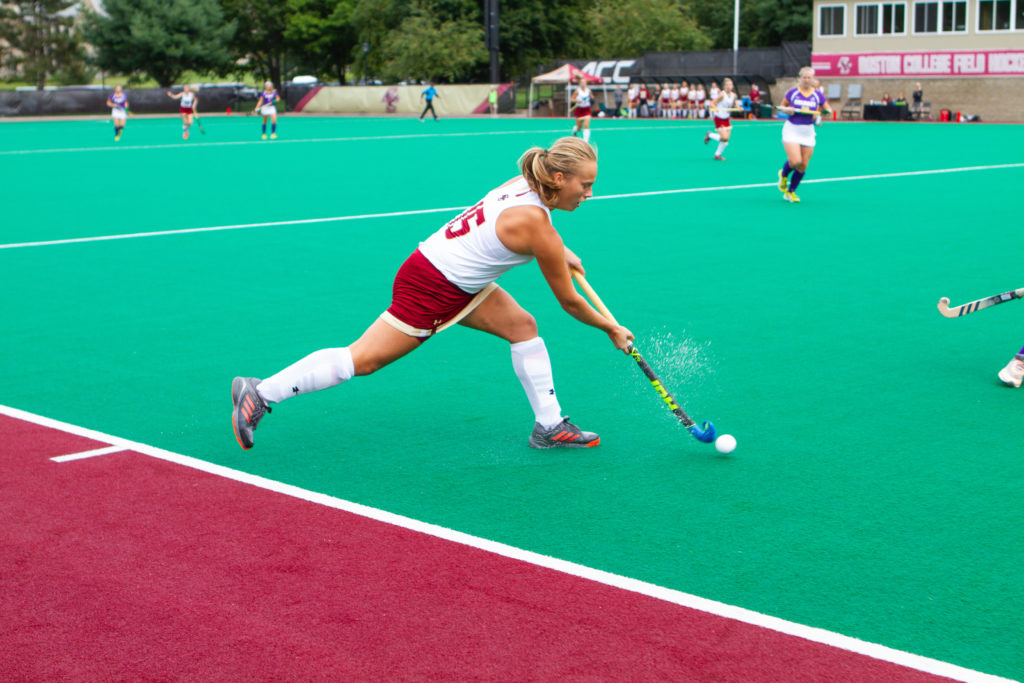 Govaert’s 56th Minute Goal the Difference in Win Over Albany

After a tough weekend in Maryland that handed Boston College field hockey its first two losses of the season, the No. 13 Eagles returned home with a similarly daunting slate of opponents looming—ACC foe Wake Forest on Friday night and No. 25 Albany on Sunday afternoon. After edging the Demon Deacons, 4-3, for its first conference win since October 2016, BC followed with a nail biter of a 1-0 win over the visiting Great Danes.

The Eagles (3-2, 1-0 Atlantic Coast) used a 56th-minute goal from Fusine Govaert to polish off a terrific home weekend, needing seven saves from goaltender Sarah Dwyer to secure the win. Dwyer, who has two shutouts on the season, withstood a late rush from Albany (2-2) and its extra attacker late to earn the victory.

Govaert, who scored six goals in 12 games last season, has already reached half that in the first five this year. The sophomore scored her team-leading third goal after teammate Carly Kauffman’s initial shot was deflected to her, where she tucked it away with ease. It ended a three-game scoreless streak for Govaert, who played just 33 minutes in the win. She’d peppered Wake Forest the day prior with four shots but wasn’t among the four goal scorers in the win.

BC was a well-deserved winner, as it controlled the pace of the game for much of the 70 minutes. It was especially evident in the opening half, where the Eagles held an edge in shots and forced Melissa Nealon to make a trio of saves. Still, nothing came of it, and the first 15 minutes of the second period were very uneventful.

A flurry of chances around the 45-minute mark followed, with Kauffman and Frederique Haverhals both having shots blocked in succession. Nealon came up with a pair of saves five minutes prior, but the second wasn’t enough—Kauffman’s first effort was sent back to Govaert, who buried it. Suddenly faced with the prospect of having to find an equalizer with just 16 minutes left in the game, the Great Danes responded with vigor.

Dwyer, who had needed to make just two saves since the break, turned away four in a span of three minutes. The junior absorbed the best chances Albany had and maintained the one-goal lead, denying Dana Bozek and then Frederike Helmke three times in rapid succession. It was an impressive individual performance, as she had largely been untested but was still able to step up when needed most.

In the final two minutes, the Great Danes opted to put Sheridan Messier in as an extra attacker with Nealon on the bench, but it was to no avail. They didn’t manage to get a shot off, and a green card in the final minute on Ghislaine Beerkens—who led the America East in game-winning goals a season ago—proved to be the final straw.

The bounce-back weekend from the Eagles was much needed. Much of 2017 was defined by close losses, with three narrow one-goal defeats that prevented them from winning a single conference game while keeping the NCAA Tournament out of reach. A familiar story played out in the losses to No. 4 Maryland and No. 12 Northwestern, but the fact that they were able to flip the script the next time out is a promising sign. With another ACC test against No. 11 Louisville on the road next, BC has a chance to build on the early conference success.