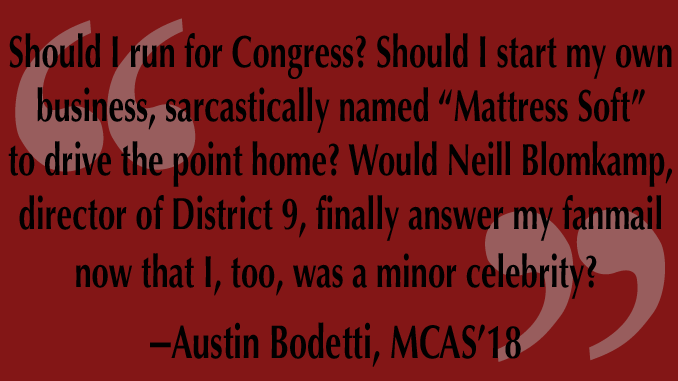 In the several months since I’ve graduated, many of my fans have asked me, “Austin, what do you, a renowned former columnist for that ill-fated newspaper The Heights and overall demigod, consider your greatest accomplishment from your four years at Boston College?”

At first, I struggled to choose from my many achievements. In the last year alone, I had uncovered the origins of the Russian Math School, surmised the fate of the 2,000 plates stolen from Lower in 2016, and calculated how much money BC spent on grass in a given year. You might as well have asked me to pick the handsomest Hemsworth brother (Chris).

Only last month did I happen upon my great accomplishment: Mattress Firm, my historical enemy and natural predator, began to debate declaring bankruptcy. In early 2018, I had run a tireless investigation of whether Mattress Firm’s name—poorly chosen as it was—was a pun.

After I spent a month in fruitless conversations with the company’s dubiously informed customer-service representatives, a Mattress Firm executive told me that the business’s name was not, in fact, a pun. I had discovered the truth behind the name of the mattress-selling behemoth. Only half a year later, though, have I come to appreciate the consequences of my actions. With this declaration of bankruptcy looming on the horizon, I have single-handedly defeated Mattress Firm, a mattress-powered titan whose tyranny extends from California to Connecticut.

Of course, it’s entirely possible that Mattress Firm’s own disastrous financial decisions led to its potential bankruptcy, but let’s be real here: As the greatest investigator of puns ever to live, I should probably get to take all the credit. The Heights certainly didn’t help me in any way.

As the reality of my victory sunk in over the past few weeks, I initially struggled to decide what to do with my newfound sense of power and purpose. Should I run for Congress? Should I start my own business, sarcastically named “Mattress Soft” to drive the point home? Would Neill Blomkamp, director of District 9, finally answer my fanmail now that I, too, was a minor celebrity? These ideas seemed too grandiose. I realized that my triumph needed to begin in a pettier fashion.

I ordered a mattress from Mattress Firm.

The next day, my order arrived at my new apartment. The delivery men placed the mattress in my room and left within five minutes—well before I could explain how I was exercising my dominance over Mattress Firm by making them do my bidding. They didn’t even say goodbye.

The interaction had seemed more epic when I played it out in my head.

I had been so excited to gloat about how I, BC’s hometown hero, had vanquished the villainous umbrella organization of evil known as Mattress Firm. On further reflection, I concluded that I would probably just have to order another mattress when the company did actually go bankrupt.

What would I do in the meantime?

I spent the days following my purchase of a Mattress Firm mattress unable to answer this question. Considering that I had just downed an iconic franchise, doing anything else felt underwhelming. The only way to pass the time seemed to be the most underwhelming activity of all: writing another column for The Heights, which lost all its redeeming qualities as soon as I graduated.

You may be wondering, “Austin, Italian-American man of my dreams, how did you manage to slip another column past The Heights’ censors if you’re no longer a BC student?”

Good question, my rhetorical-question-asking hypothetical friend. The answer, of course, is nepotism. I know The Heights’ famous editor-in-chief. Some might call us “best friends” or even “soulmates.” Then again, those people would just be peddling fake news.

In any case, I have an in with BC’s low-energy student publication for the next few months at least, and I plan to make use of it until Mattress Firm finally implodes and I have a better way to spend my near-infinite free time. Maybe BC students will actually read The Heights now, too.

We can only hope.

I’m still deciding what form my future columns will take. I could conduct more investigations—the mystery of what happened to Muammar Gaddafi’s New Jersey mansion seems to be calling my name—or I could keep roasting The Heights even though that got old well before I started doing it. So many options. So much time. I really underestimated how boring my victory over Mattress Firm would be.

On second thought, maybe I’ll just offer insights into what it’s like to be a handsome, youthful BC alumnus out in the world. I’ve always considered myself pretty wise, so I should probably spread my wisdom among the youths once they stop protesting the demise of late night as they know it.

I’ll trust you to stay on the lookout for future columns, my beautiful readers.