Home » ‘The Nun’ Leaves Audiences Praying for the End 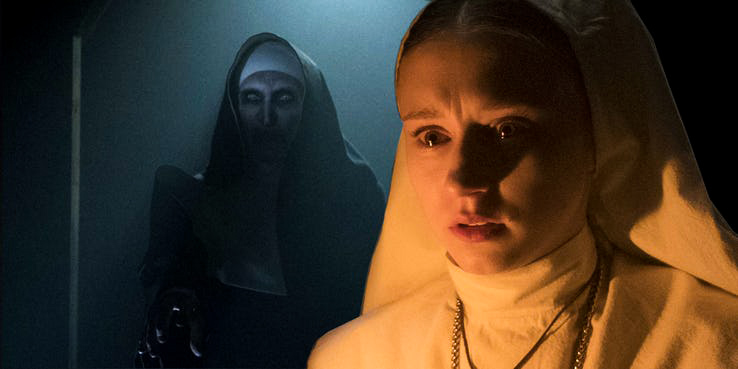 ‘The Nun’ Leaves Audiences Praying for the End

You know, with all of the seemingly endless scandal plaguing the Catholic Church, the horror genre isn’t really doing them any favors. The Nun, the latest in an apparently infinite series of sequels or spin-offs or prequels to the not-very-good The Conjuring, was released this past weekend. Reminding us in the audience that The Nun is not alone in its unoriginality and derivation, there was a trailer for the upcoming Halloween movie. Notably, this Halloween is not the only movie titled Halloween in the franchise. In fact, of these now 11 movies, three of them are now titled Halloween. Two of them are also titled Halloween II, but only one of them is titled Halloween H20: 20 Years Later, so who’s really the biggest loser here? It’s us. We are. We always lose. But anyway, The Nun is set before the “spooky” events of The Conjuring and The Conjuring 2—although this film ties more directly into the latter. We, the ever-suffering audience, get a chance to see the big bad—Valak—when it was younger (The Phantom Menace-style). Yay.

At this point, it’s honestly getting more difficult to write critically about bad horror movies than it is to make one. Just like every trope and cliche has been beaten past death and into a thin smear on the ground by bad horror movies, it seems like everything to say about them has already been said. And, since this reviewer at least cons himself into believing that he is making the effort to stay original, it’s hard to play the game when The Nun and movies like it are throwing the rule book away. The Nun is not as bad as this diatribe is making it out to be, but it’s a stand-in for all other movies of its ilk, so it’ll just have to take it. These movies seem to have no scruples or shame, or even attempt at disguise, when it comes to ripping off what’s been done before it. This is not the same as paying tribute, or writing a love letter, or even honoring the past. This is just an act of regifting without removing the price tag, the previous addressee’s name, or even the Amazon box this fifth set of salt shakers came in.

Sorry, this is getting off track.

Anyway, The Nun takes us back to 1952, in the backwaters of Romania, where a convent in the middle of the forest is plagued by some as yet unseen evil (who might it be?). The audience is treated to the delight that is a series of unexplained actions that are immediately understandable and predictable by anyone who has ever seen a movie but which the movie will later act out a big reveal in some contrived explanation to the muted gasps of those in the audience who decided that this would be the first movie they would watch in their entire lives (it’s the only way I can explain their apparent surprise). Oh, and a nun hangs herself to escape the evil. But all of this happens after the first moment of The Nun, in which we are forced to sit through flashbacks/forwards to scenes from The Conjuring 2 so we really know that the monstrous nun-demon we are about to see is the same one from last time. Great.

Succinctly, the body is found by a man nicknamed Frenchie (Jonas Bloquet), and news reaches to the Vatican. They send Father Burke (Demián Bichir), a priest with a dark past (yawn), and Sister Irene (Taissa Farmiga), a novitiate nun with a heart of gold who’s also oh so relatable to the young people because she believes in dinosaurs and that the Bible shouldn’t be interpreted literally. The character work here is unsurpassed. Our intrepid trio sets out to investigate. Immediately, they are beset by jump scares and attacks by ghosts and the demon itself. One would think that this might be enough to report back to the church with the fairly apparent response of “yep, definitely a demon,” but no. Instead, the audience will watch the rest of this 96 minute to determine that it in fact is definitely a demon.

The Nun has very few redeeming qualities. Valak’s origins are sort of interesting, in the way that reading the Book of Revelations is sort of interesting. That’s really about it. The acting is bad, the story is bad, the camera work is bad, the horror is bad because it’s all just jump scares, even some of the “spooky” signs don’t make any actual sense. One of the main signals used by The Conjuring movies is that when the demon comes, all of the crosses in the room turn upside down. Some might remember, however, that this symbol is just as Christian as the last one, because if my limited knowledge of Christianity serves, legend has it that St. Peter was crucified upside down. But maybe Valak The Nun is just a big fan of the Petrine Cross. Who knows? This movie certainly doesn’t. But more importantly, who cares.

the nun the conjuring the conjuring 2 taissa farmiga
Greta Van Fleet’s “Watching Over,” and More in New Singles This Week
Kravitz Draws on Soul Roots and Political Unrest on ‘Raise Vibration’