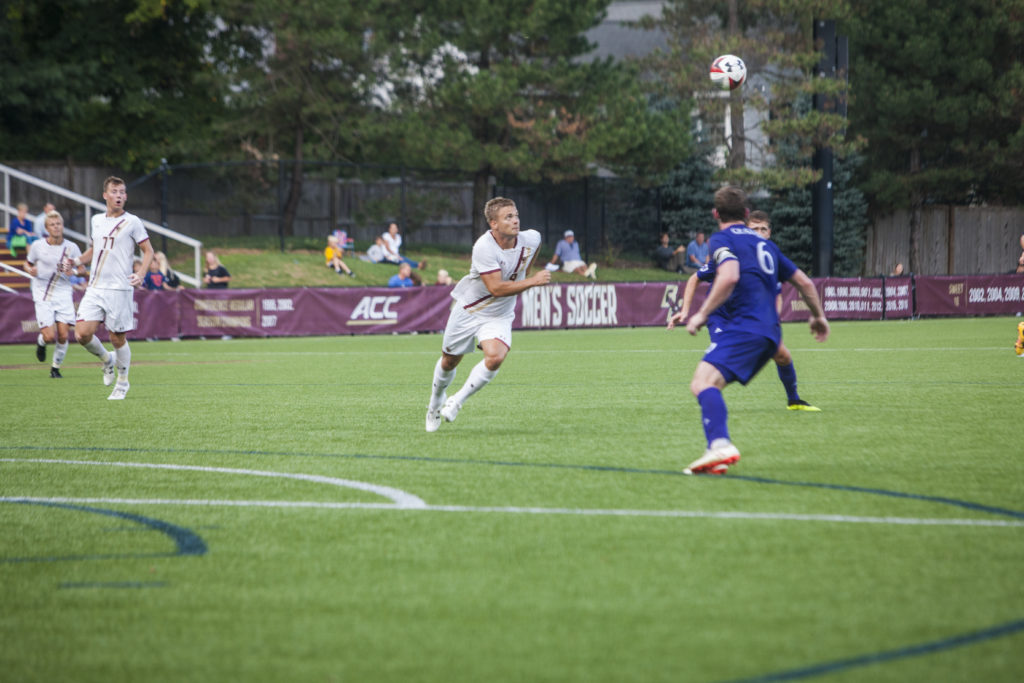 At the final whistle, Lasse Lehmann and other Boston College men’s soccer players collapsed to the turf in disbelief, while Simon Enstrom pulled his jersey up over his head in shock. After 110 minutes, 32 shots compared to just seven for Holy Cross (0-2-2), one questionable offsides call that prevented a clear goal scoring opportunity, and numerous opportunities to win the game, BC was unable get the job done. Despite a dominant performance in midfield, the Eagles struggled to score on Crusaders keeper Henry Stutz who made several fingertip saves and frustrated Eagles attackers all game long, and had to settle for a 1-1 draw in their first meeting with the in-state rival Holy Cross since 2010.

The start of the game was choppy and sloppy. The Crusaders were having difficulty getting on the ball, while a couple of poor touches were preventing the Eagles from stringing together a coherent attack. It didn’t take long for that to change. Eleven minutes in, a beautiful long throw-in gave Enstrom his first real opportunity of the game. The senior unleashed a fierce shot with the outside of his right foot, only to see it skip wide of the far post. He wouldn’t rue the missed opportunity too much.

Just 30 seconds later, Trevor Davock won a 50-50 ball at the top of the box off a feed from Kristofer Konradsson. His fierce drive was palmed away by Stutz, but the rebound fell right to the feet of Enstrom. The senior captain, fresh off a two-goal performance against Clemson, made no mistake with his follow-up, burying it in the roof of the net to give the Eagles the early lead.

BC continued to dictate possession and created more shots than its New England counterpart, though Holy Cross did have a couple chances of its own. First, a cushioned header from Simon Becher off a long ball into the box found Mason Brummett in space at the top of the 18 but his half-volleyed attempt skimmed wide of the right post. Eight minutes later, a free kick from the right wing fell to Rory Birse at the top of the box, but his effort was well wide of the near post.

Besides these few opportunities, the Eagles continued to enjoy control of the game. Ivan Postolka won a corner for the Eagles that the Crusaders managed to scramble clear, and just three minutes later the ball dropped to Konradsson at the 18, following a scramble on a corner. His driven strike soared well wide of the post.

Enstrom and Konradsson both saw efforts blocked as the Eagles continued to apply pressure, but were unable to break through. And late in the first half, they paid for their inability to convert their dominance into another goal. In the 42nd minute—after Ivan Postolka was beaten on the Crusaders’ right wing—Garrett Leahy’s square pass found Becher at the top of the box, and the freshman forward unleashed a right-footed rocket that found the bottom right corner. For Holy Cross, Becher’s first career goal could not have come at a better time.

When the second half started, it was immediately clear that the match was no longer a lopsided affair. Just five minutes in, Lehmann gave the ball away in midfield, allowing the Crusaders’ R.J. Place an open look at goal at the top of the box, only for a pair of flying Eagles defenders to block it behind for a corner.

It was only with the reintroduction of Callum Johnson and Abe Bibas, and the switch to a 4-3-3 with 20 minutes to go that BC finally began to reassert its dominance. After the formation change, the Eagles—Konradsson in particular—impressed head coach Ed Kelly.

“When we switched to a 4-3-3, he really came into his own and caused havoc, cutting inside and taking people on,” the longtime coach said.

First, a header from Tyler Stott off a corner kick was saved by Stutz, and then BC began to pepper the Crusaders’ goal from distance. Johnson and Lehmann both watched scoring attempts sky over the bar before Johnson found himself in space just inside the box, but had his shot blocked by a sliding Holy Cross defender. A minute later, Konradsson saw his driven shot from distance barely parried out by Stutz, and Enstrom sent a close range follow-up high. In spite of their pressure, the Eagles were unable to find a way through, as Stott eyed one final header save before the end of regulation.

The overtime period yielded more one-way traffic toward the Holy Cross net, as the Eagles hit the woodwork not once but three times. First Konradsson ripped yet another long-range shot on net, clipping the outside of the post. A mere five minutes after that, Tyshawn Rose’s curled delivery found Enstrom alone in the box, but his header ricocheted off the top of the bar. Konradsson hit the post again with yet another bending shot, and a flurry of free kicks and corners amounted to nothing before the whistle blew.

But BC’s best chance to win the game came with just under five minutes to play. Enstrom—onsides due to a Crusaders player that had gone down injured just a few yards from his own goal line—was played clean through. Even so, the sideline referee signalled for offsides, most likely because he hadn’t spotted the injured player. Play was mistakenly blown dead before Enstrom could get a shot off, killing off a golden chance for the Eagles to win the game.

“Human error,” Kelly said after the game. “No problem, but costly, and there’s no guarantee Simon would have scored. We had our chances—we can’t blame the referee.”

Indeed, with three ACC games in the next week, BC can’t afford to miss this many chances and hope to continue its unbeaten start to the season.