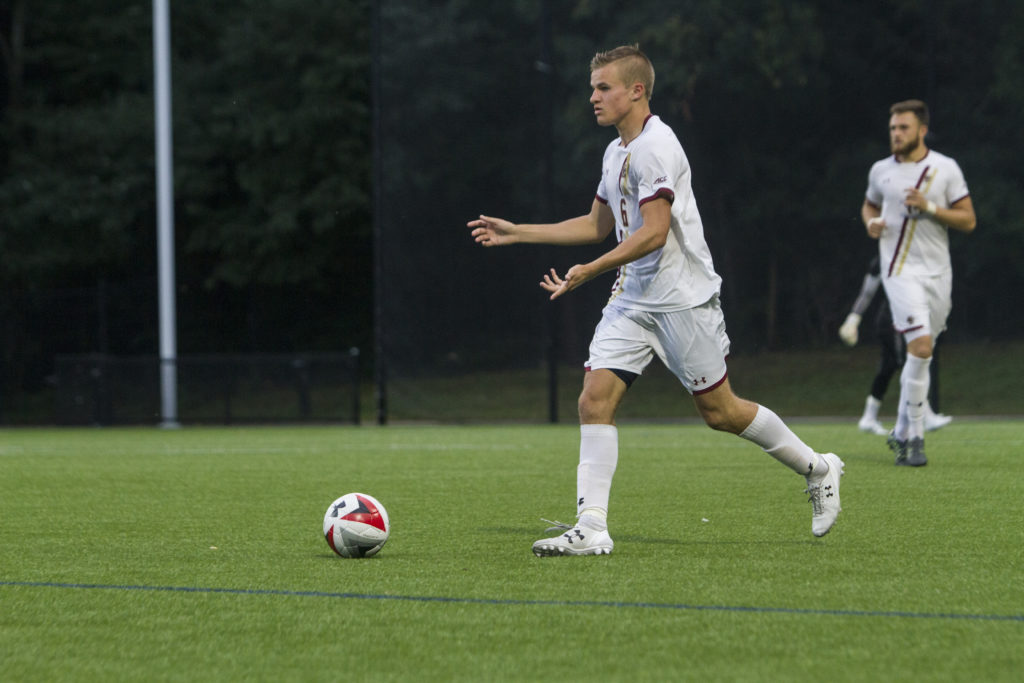 Tuesday’s tie against Holy Cross felt like a loss for Boston College men’s soccer. Players collapsed to the pitch after the end of double overtime just wondering how their peppering of shots only resulted in one goal. However, this mindset of expecting to win and being visibly disappointed with anything else is something novel and well-earned by this BC squad. With a statement win against Clemson already in the books, the Eagles (2-0-3, 1-0 Atlantic Coast) have already matched their conference victory total from all of last season. BC is still carrying an undefeated record into Friday night, where a brutal conference matchup awaits with No. 7 Louisville.

The Cardinals (3-1-0, 1-0) are red-hot after disposing of then-No. 2 Duke by a convincing 3-0 margin last Sunday. Their lone loss came to Kentucky, which currently sits at No. 6 in the rankings. For Ed Kelly’s group to keep its undefeated start alive, the Eagles will have to up their level of play against this Cardinals team hungry for its second conference win.

This match will be livestreamed by ESPN via the ACC Network Extra.

6: The number of goals Simon Enstrom has scored in his first five games. The Swedish senior has found early success acting as a true number nine, using his 6-foot-1 frame to play physical offense. He’s shown his aptitude to finish with his feet as well as his head.

14: The number of shots the Eagles have averaged per game. This total is good for second in the ACC, as BC has shown the ability to create space and get shots away on a match-to-match basis. Part of the reason why this number has translated to three ties has been accuracy, as only 30 of 70 shots have been on goal.

9: The number of the Eagles’ 10 goals that have been assisted on. Trevor Davock leads the team with three assists, as BC has done a great job of using team play to set up goals, relying less on isolation in order to score.

27: The total number of shots Louisville has allowed in four games. The Cardinals showcase a stifling defense that rarely lets shots see their goalkeeper. Of these 27 shots, only four have found the back of the cage.

6: The number of Louisville players that have tallied at least one goal this season. The Cardinals have scored just six times, meaning that each tally has come from a different contributor. Louisville has so many attacking options that the Eagles cannot key in on just one.

3: The number of second-half goals that Louisville erupted for against Duke. Adam Wilson, Ziyad Fekri, and Elijah Amo all found twine to carry the Cardinals to victory. They also shut down the Blue Devils’ offense, allowing just two shots on goal.

On Sept. 22, 2017, the Eagles traveled to Louisville to face the No. 10 Cardinals. BC fell, 4-0, with all of the conceded goals coming in the second half. Tate Schmitt notched two as part of the Cardinals’ second-period blitz. This win vaulted Louisville to a strong 6-1-1 campaign, while BC wouldn’t win its first conference match until mid-October.

It enters the primetime matchup with the same mindset it had last week going into its game against Clemson. The Eagles will undoubtedly get fewer scoring opportunities than they had against Holy Cross, so they will need to be better at cashing in on their chances. Getting behind this tough Cardinals back line will be key, and a little more Enstrom magic might be what BC needs to log its second-straight ACC victory. The Eagles should look to play off the home crowd, just like they did against Clemson, for a chance to pull off the upset.

It fails to lock down Louisville’s multi-faceted offensive attack. The Cardinals are hitting their stride on both sides of the ball, and any lapse in concentration could lead to the ball being in the back of the net. On defense, BC has one of the highest goals allowed per game in the conference. The defense must stay disciplined, and if goalkeeper Antonio Chavez Borrelli cannot come up with some big-time saves, it might be a long night for the Eagles.