BC Continues to Emphasize Diversifying Faculty

Almost a year after the “Silence is Still Violence” march, Boston College is staring down several obstacles that stand in the way of a more diverse and representative faculty, but according to figures, BC has one of the most diverse faculties of its peer schools.

Last fall, over 500 students signed a letter of support that called for the University to hire more administrators and faculty of color, especially in STEM departments and the Carroll School of Management, which the letter highlighted as historically non-inclusive. Currently, 19 percent of BC faculty identify as AHANA+, continuing the steady trend of a 1 percent increase each year.

The decentralized nature of the hiring process can impede attempts at hiring a more diverse staff, said Billy Soo, vice provost for faculties. Since each department takes the lead in selecting and vetting candidates, there are no institutional measures that allow the University to take a step back and look at overall hiring diversity.

“Once we give permission for a department at the school to hire, they’ll decide on a few finalists … and make a recommendation to [the Provost’s Office],” Soo said. “Often times, we just defer to the departments because they know the qualities that they’re looking for.”

Aneeb Sheikh, MCAS ’20, said that student representation on faculty hiring committees could lead to a higher faculty diversity rate. Sheikh is the chair of the Student Assembly’s Academic Affairs Committee, and announced his intention to discuss faculty diversity with the Provost’s office.

“The most important thing is to establish relationships with departments and faculty hiring committees and communicate with them effectively to gauge their expectations, goals, and ideas as well,” Sheikh said over text.

The University hired 18 new AHANA faculty members this fall, which represents 26 percent of the total faculty hires for the current academic year, Soo said. This represents a regression to the mean after the 46 percent that made up the group hired a year ago. In 2015, AHANA+ hires made up 28 percent of hires.

Progress can be slowed by the varying numbers of openings each year. Despite this limitation, the total amount of AHANA+ faculty has steadily grown three percentage points from 2015 levels.

“The administrative side is easier, because there’s greater turnover in those ranks,” Soo said. “Whereas on the faculty side, the growth of the faculty is oftentimes constrained by the number of open positions that we have. A department will be lucky if they get one or two slots, and so once you’re dealing with so few slots, it’s just simply harder to expand that pool immediately.”

Last year, BC turned toward a new solution, in which several departments sought out candidates who would also work in the African and African Diaspora Studies Department (AADS), a process Soo credited with the large spike in hiring diversity that year because of a “cluster hire” in 2017 of candidates who hold joint appointments in AADS and other departments.

“The challenge with that is we can’t do that every year,” he said. “There’s just not enough demand for the AADS courses for us to continuously.”

He pointed to the Lynch School of Education and the Graduate School of Social Work as examples of departments especially committed to increasing their AHANA+ faculty populations. Both schools hired AHANA+ candidates in two of their three available slots this year.

Soo also recognized that there are underlying issues with the diversity of the general applicant pool, especially in areas such as STEM. He cited the Woodrow Wilson National Fellowship Foundation’s Career Enhancement Fellowship Program, which aims to increase the number of AHANA+ faculty members by providing grants and research stipends to minority doctoral candidates. By expanding the sheer number of AHANA+ candidates, it expands the field of applicants that departments are able to recruit.

“I also hear from them that the pipeline just isn’t there,” Soo said. “We’re just not attracting enough of these candidates to come to campus.”

Another blockage in the pipeline comes in the recruiting process. Universities all across the nation are heavily pushing for a more diverse faculty, thinning out an already narrow pool.

Soo sees two upcoming opportunities to improve diversity at BC. The first comes in the form of faculty turnover, which has increased in recent years, primarily through retirements.

“It shouldn’t be surprising that that population of faculty is predominantly white men, because when you go back 40 years ago, 30 years ago, you know, that was the composition of the school, right?” he said.

As that cohort retires, the incoming faculty will naturally be more diverse and representative, Soo explained.

The Schiller Institute for Integrated Sciences and Society will provide the second opportunity. The University plans on hiring 22 new faculty for the institute, projected to open in 2021, opening up a chance at diversifying the STEM programs at BC. Soo said that female senior faculty are being targeted for positions in the science department as well.

Since 2015, the University has conducted workshops, run by the Office of Institutional Diversity, to eliminate forms of bias in the recruitment and hiring process.

“There’s a natural tendency to hire people that look like you and that sound like you,” Soo said. “It limits the pool of potential people that you can recruit from and ever since we started doing [the workshops], the percentage of AHANA faulty that we’ve hired has actually gone up.”

As required under current labor laws, BC conducts race and gender-blind admissions. Despite this, Soo shared his concerns with other insidious, and often unconscious, bias in the process. The Provost’s office makes it clear to the workshops’ participants that they need to be aware of these biases.

Soo suggested that there might also be a much more subtle bias that strikes when applicants are recruited in the first place. When departments search specifically for graduates of certain schools, they limit themselves to an applicant pool that is only as diverse as those institutions.

Soo suggested that students looking to make a lasting difference engage with the numerous fellowships and grants that BC provides specifically to AHANA+ students. If more minority students pursue graduate studies, the long-term result will be a more robust pipeline of underrepresented minority faculty.

Although he warned that this bottom-up approach may be slow, Soo said he hoped that BC would be able to create a new generation of more diverse faculty. An increasingly diverse faculty will help students on campus feel more comfortable and represented in the classroom.

“If these are the kinds of students we’re attracting, then our faculty should reflect that,” Soo said. “We want our students to see our faculty and sort of say, ‘I can relate to this faculty member, I can see myself in their position, I can see that my experiences are shared by them.’” 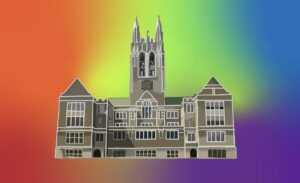