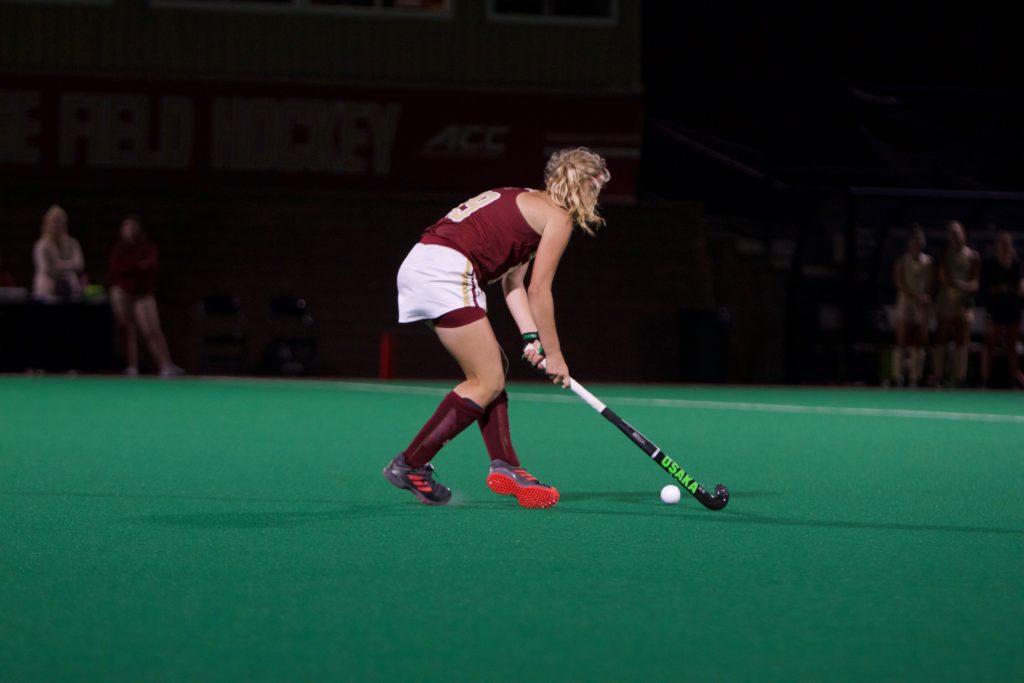 BC Wraps Up Two-Game Road Trip With Win at Northeastern

After Northeastern ferociously kept the score even for most of the second half, Boston College field hockey needed an answer. After all, the Eagles are one of the top ranked teams in the nation, while the Huskies are one of the most inexperienced. With under 10 minutes remaining, Cassidy Atchison took the game into her own hands. With no defenders to beat, she charged and flicked a shot off the outside of Julia Gluyas’s leg guard. As the ball settled into the back of the net, Atchison hugged her teammates, who all raised their sticks into the purplish sky of the Dedham evening, celebrating a 2-1 victory.

No. 9 Boston College (4-3, 1-1 Atlantic Coast) controlled a significant part of the first half against Northeastern (2-5), obtaining three penalty corners in the first five minutes before the Huskies could even get a shot off. The pressure wore Northeastern down early on in the game.

On the last of these penalty corners, Fusine Govaert dribbled through the Northeastern defense and fired a shot that bounced off the stick of a Northeastern defender and into the goal. It was a torrid start for BC in a rivalry that has been lopsided of late. The Eagles had won five of their last six meetings against the Huskies prior to Tuesday night’s matchup, and the early stages of this game seemed to suggest that their success would continue.

BC controlled possession for a majority of the remainder of the first half, tallying two more penalty corners while recording five total shots on goal. In search for more goal conversions, the Eagles started to stretch the field. This aggressive mindset would prove to be unsuccessful, as the Huskies started to force turnovers and push the ball toward the BC half as halftime approached.

With five minutes remaining in the first half, Northeastern forced its first penalty corner. It took 30 minutes for the Huskies to get a scoring chance of this magnitude, and they surely made the most of it. June Curry-Lindahl rolled a pass to Rachel Campbell at the top of the striking circle, and the senior midfielder bounced it through Sarah Dwyer’s five hole to even the contest.

After a start that seemed significantly slanted in BC’s favor, a 1-1 score was an extremely positive result for the Huskies at the break. They came out of the locker room for the second half believing in themselves, and played the second period convinced that they could pull off the upset.

The pace of the game picked up in the latter period. Northeastern found ways to create opportunities against a stingy BC defense, and the Eagles responded by forcing turnovers and clearing the ball out of their side of the field. As time diminished, tension on the field amplified. A mistake for either team at this point would have been the cause of defeat.

Midway through the second half, with only Gluyas to beat, Govaert whipped a shot just wide of the net. The midfielder came inches from her second goal of the night, but this was the first of a bevy of chances that the BC offense generated down the stretch.

With about 18 minutes left, the Eagles forced their first penalty corner of the second half. After Frederique Haverhals received the inbound pass, she fired it at the goalkeeper. Elizabeth Warner then reached around Gluyas and tipped the ball into the back of the cage. As BC celebrated, the referee blew the whistle, signaling for a high ball foul. Since Warner’s stick was held too high off the ground when she made contact with the ball, the goal did not count.

The BC offensive attack refused to let the referee decide the outcome of the game. With around 10 minutes left, a tremendous effort by Brooke Matherson was kicked away by Gluyas. Shortly after, Atchison bounced the ball into the back of the net, giving the Eagles a 2-1 lead.

Northeastern’s last opportunity occured on a penalty corner with four and a half minutes left. Freshman back Eva Van de Mierop came up with a game-saving stop by blocking the Huskies’ drive and preventing a possible goal. She would ultimately leave the game limping after putting the finishing touches on a stout defensive outing.

Narrow win or not, BC is back above .500—that said, the Eagles still have a lot of work to do before their Friday night matchup against Virginia. While BC’s defense has been consistent, its offense has not. As a team, the Eagles have averaged just two goals per game in league play this year. Conversely, they have not allowed more than three goals in any one of these contests. BC’s offensive attack will likely need to convert at a higher rate in order to overtake the Cavaliers, or any ACC team for that matter, in the conference standings.