We’re trying something different here, with the aim of guiding readers looking for alternatives to the usual multiplex fare toward screenings of independent and repertory films in the Boston area. There’s no shortage of great cinema in and around the city, as programmers go to great lengths to set up impressive retrospectives at theaters like the Brattle in Cambridge or the Coolidge Corner Theatre in Brookline. These same theaters also tend to show first-run screenings of underappreciated independent films that are just as worthy of your attention as anything playing at the local AMC or Regal. This guide will attempt to highlight and discuss some of the most exciting screenings in the coming week, with the hope of shedding some light on some older classics and underseen gems that may have flown under the radar.

In celebration of the director’s centennial, the Coolidge Corner Theatre, the Brattle, and the Harvard Film Archive will be screening newly restored prints of Bergman’s classics this fall. Cries and Whispers sees Bergman at the peak of his formalism, supplementing the narrative’s heavy melancholy with lush compositions and images that emphasize the grief endured by his suffering characters. The film is a 19th-century period piece about three sisters, one of whom is dealing with a terminal cancer. (1972, 91 minutes, 35mm)

Bisbee ’17 will make its area premiere this Thursday at 7 p.m. at the Brattle, with the director there in person to discuss his widely praised documentary. Greene takes us to Bisbee, Ariz., a mining town near the Mexican border where the Bisbee Deportation took place, during which 1,200 immigrant workers were violently taken away and shipped into the desert and left to die. 2017 marked the 100th anniversary of this atrocity, and the film follows townsfolk as they attempt to confront their town’s ugly past. (2018, 112 minutes, DCP)

Persona stands apart from the rest of Bergman’s films for its formal panache and its ambiguous narrative. A mute actress (Liv Ullmann) attempts to recover from an emotional breakdown, spending time at an isolated beach house with a nurse (Bibi Andersson). The two share an odd relationship that oscillates between tenderness and hatred, and it soon becomes apparent that there exists a metaphysical bond between these two women. Bergman’s characters seem to swap identities from scene to scene, and the entire experience is at once confounding and sublime. (1966, 83 minutes, DCP)

“For years, [Nicholas Cage] has swung wildly in search of gonzo material; at long last, he’s found a movie willing to match his crazed intentions,” said Indiewire’s chief film critic, Eric Kohn. If that doesn’t sell you on Mandy, then what will? Mandy’s screening all week at the Coolidge, but seeing it at midnight may just be the perfect time to experience this delirious revenge fantasy starring one of the greatest living actors giving one of his most intense performances. (2018, 121 minutes, DCP)

Donen’s musical send-up of Hollywood remains one of the most impressive, timeless works of the studio system, and one of the most enjoyable films to behold. The story is set in 1927, a transitory period when Hollywood was moving away from making silent films and toward the production of “talkies.” The story follows a group of friends (Gene Kelly, Debbie Reynolds, Donald O’Connor) working within the studio system, attempting to adapt to the changing times by singing and dancing their way through these difficulties. If you’ve yet to see the film or if you simply want to revisit it, the Harvard Film Archive will be offering $5 admission for the screening this coming Saturday. (1952, 103 minutes, 35mm) 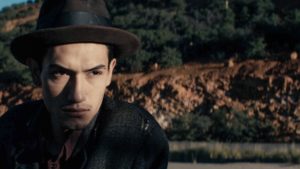