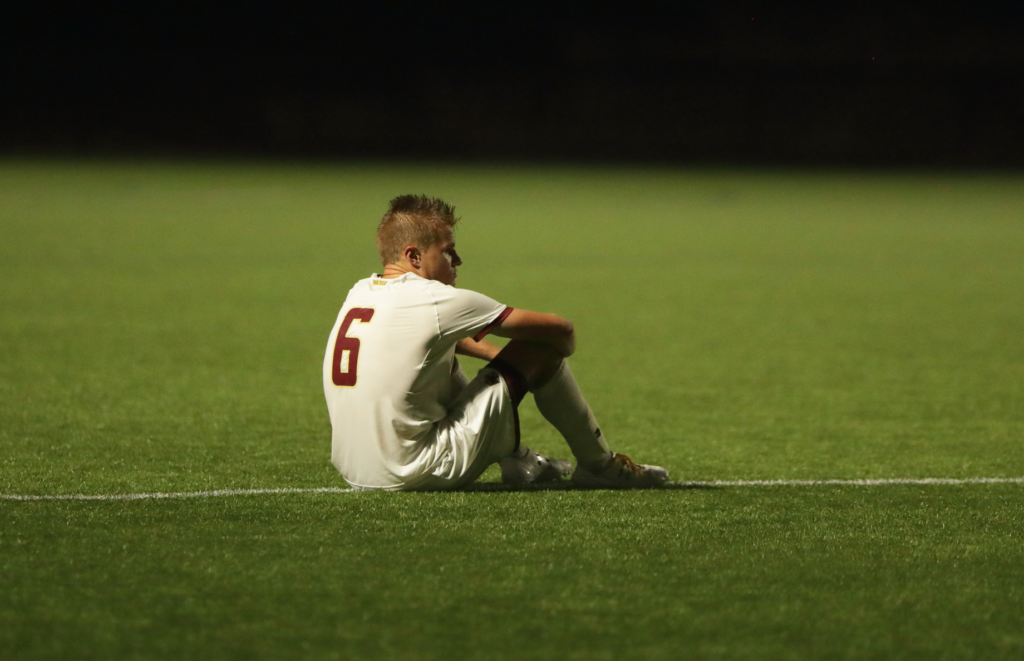 Eagles’ Late Rally Falls Short in Loss to No. 7 Duke

In 2017, Boston College men’s soccer couldn’t find the back of the net. The Eagles had the worst scoring offense in the ACC, averaging just 1.29 goals per game. In fact, they managed just one against a ranked conference opponent all season. So when BC (2-2-3, 1-2 Atlantic Coast) scored not just one but two goals against No. 7 Duke (4-2, 1-1 ACC) Friday night, it was a clear sign that its offense has progressed from a year ago. The team’s scoring average is now up to 1.71 goals per game.

Unfortunately for the Eagles, it’s also obvious that they still have some defensive issues to sort out. After going into halftime knotted at zero, Duke exploded for three goals in a 20-minute span during the second half. The Eagles fought back, but a late rally proved to be too little, too late, and BC suffered a 3-2 defeat, its second-straight one-goal loss against a ranked opponent.

In the opening 20 minutes of the game, it was the Blue Devils who had the better chances and possession, as good work down the wings earned them three corner kicks. The Eagles managed to scramble clear two of them, and the third forced Antonio Chavez Borrelli to make his first save of the game.

But after the early flurry of Duke pressure, the game evened out, as both teams created good chances before the halftime whistle sounded. First, a long BC free kick fell at Tyshawn Rose’s feet 15 yards from goal. The freshman, seeking his first career collegiate goal, let fly a curling shot that clipped the outside of the right post, leaving the Eagles inches away from taking the lead. Later in the half it was Simon Enstrom putting an effort on goal, but Will Pulisic came up with an excellent point-blank save to deny the senior his seventh goal of the season.

Meanwhile on Duke’s end, Issa Rayyan hit the post for the Blue Devils with a bending shot and watched another chance veer just wide, while Nicholas Macri whipped a header off a corner kick over the goal to leave the teams scoreless at halftime. It wouldn’t stay that way for long in the second half.

Just 12 minutes into the second frame, Duke won a free kick on the right wing and elected to play the ball short. The pass ended up with Kristofer Gardarsson, who floated a cross toward the back post. Chavez Borrelli stretched and managed to get fingertips on the ball. Unfortunately for the Eagles, he wasn’t able to redirect the pass—instead, the ball fell to the head of Ian Murphy, who buried his header to give the Blue Devils a 1-0 lead.

After conceding on the road, the Eagles could have folded. Instead, they found the perfect response just 10 minutes later. Joe Kellett played an inch-perfect through ball to Beto Luna, giving the sophomore an open look on net. Luna made no mistake, slotting a shot perfectly inside the far post to tie the game. Kellett’s assist was the first point of his career.

The lead only lasted four minutes, as Duke created a goal that was almost a carbon copy of the first. More precise Blue Devils passing resulted in time and space for Daniele Proch. His service again floated over Chavez Borrelli and dropped in front of Ian Murphy at the far post. This time, the freshman used his foot to slide the ball calmly inside the left post, restoring the Duke lead.

Just 10 minutes later, the Blue Devils’ lead was doubled, as Rayyan’s cross was expertly nodded home by Proch. BC was reeling and desperate to find an answer.

The Eagles did manage to pull one goal back, thanks to Heidar Aegisson. The junior midfielder missed the beginning of the season due to injury, but showed how valuable he is to BC in his return, playing 77 minutes and giving the Eagles one last glimmer of hope in the 87th minute. Kristofer Konradsson sent a direct free kick in the box. The Blue Devils weren’t able to clear the ball, and it eventually landed near Aegisson, who poked it home at the right post. BC continued to press until the final whistle, but couldn’t materialize a late equalizer.

Regardless of the defeat, the Eagles’ newfound scoring touch is a good sign for the team moving forward. They’ll need all the goals they can get with the conference schedule not letting up one bit. Next up: a trip to rival Notre Dame, a team that handed BC a 3-1 defeat last season.