Despite an impressive performance against No. 6 Louisville last time out, Boston College men’s soccer still suffered its first loss of the season. The Eagles (2-1-3, 1-1-0 Atlantic Coast) fell to the Cardinals, 1-0, last Friday night, as Cherif Dieye’s goal in the last 10 minutes of the game handed BC a heartbreaking loss. The defeat was an especially bitter one, considering how close the Eagles were to obtaining crucial conference points against a nationally-ranked team.

The road does not get much easier after Louisville, as the next obstacle is a trip down to Durham, N.C. to face ninth-ranked Duke. The Blue Devils are stumbling after back-to-back losses, the first coming against Louisville, so the Eagles are hoping to catch their ACC counterparts at just the right time.

Who is BC playing?
Duke

Where is BC playing?
Koskinen Stadium, Durham, N.C.

How to Watch:
The match is available to watch on ACC Network Extra.

1) Since winning the starting job over Joe Fryatt after the season opener, Antonio Chavez-Borrelli is sporting a solid .667 save percentage. He has yet to shut out an opponent on the season thus far.

2) Callum Johnson scored his lone goal of the season nearly two weeks ago against Clemson, but hasn’t recorded a point in the last two games and should be yearning to get on the board against Duke.

3) Defense hasn’t been a strong suit for the Eagles in the early going, as they’ve conceded a conference-worst nine goals. Even a physical style of play, as evidenced by 11 yellow cards—good for third in the ACC—hasn’t been enough to contain opposing forwards.

2) Duke has allowed seven goals to opponents in the second half, compared to just one in the first half—a startling difference. The Blue Devils may have some trouble closing out tight matches.

3) Goalkeeper Will Pulisic was an All-ACC Third Team selection last season, but has already allowed eight goals thus far. Pulisic’s current 1.60 goals against average is over half a goal worse than last year’s mark.

BC and Duke played a game with the slimmest of margins back on Sept. 10, 2016 at the Newton Campus Field. The Eagles were victorious, using Simon Enstrom’s 51st-minute goal to claim the 1-0 shutout victory. Then-goalkeeper Cedric Saladin recorded his third shutout of the season at that point, giving BC a win in its ACC opener.

It maintains constant pressure on the Blue Devils’ defense and opens the game strong. Duke has been difficult to get on top of early, so the Eagles will have a much easier time if they can strike first blood. When BC does get scoring chances, it will be essential for the Eagles to convert. Pulisic has plenty of talent in net for Duke, so the ability to sneak at least one past him will be huge—and could eventually hold up in a similar fashion to the last meeting.

It’s unable to contain Proch, who has accounted for 50 percent of Duke’s scoring this season. The opposing attack will be much more manageable for Chavez-Borelli in net if he’s kept in check. Additionally, it is important that the Eagles play all 90 minutes—nationally ranked teams make you pay for the slightest of mistakes. Like in 2016, just one lapse in focus for either team could prove to be crucial to the result of the game. Ultimately, the Eagles will have a legitimate chance to win as long as they can apply persistent pressure through the midfield and play smart, clean defense. 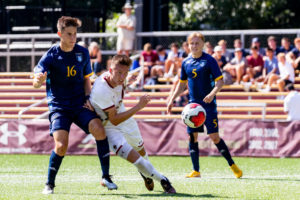