Home » No. 23 Eagles Thoroughly Outplayed in Lopsided Defeat at Purdue 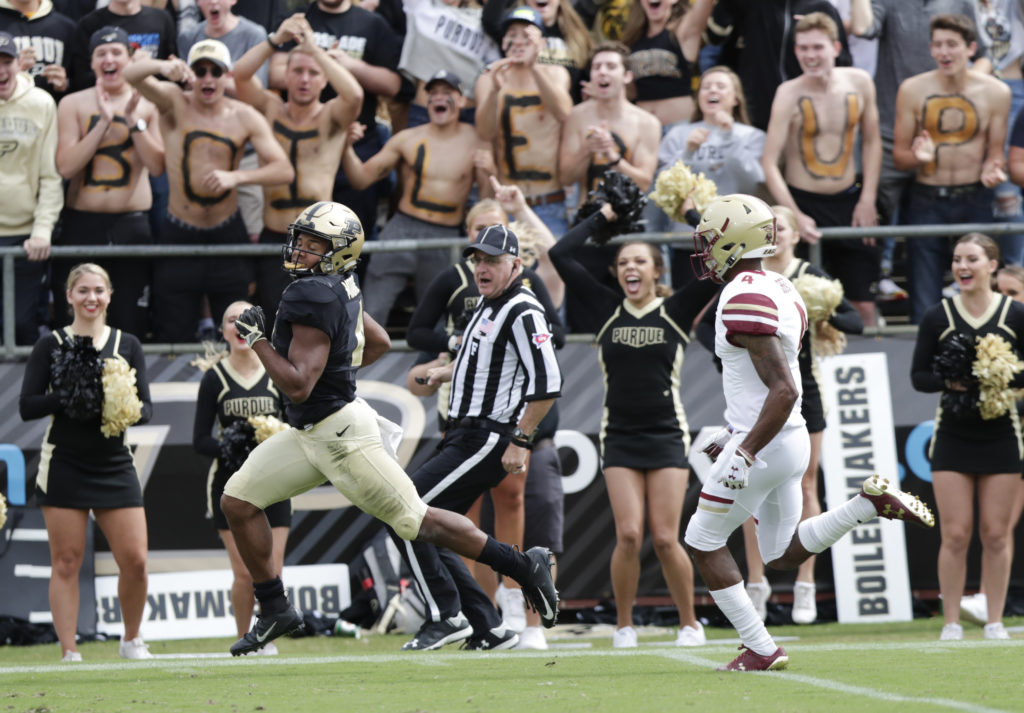 No. 23 Eagles Thoroughly Outplayed in Lopsided Defeat at Purdue

On Saturday afternoon, Boston College football went three-and-out on the game’s opening drive, Anthony Brown threw not one, but four interceptions, A.J. Dillon averaged 3.1 yards per carry, and the entire team accumulated 95 yards of total offense through the first three quarters of action—all of which hadn’t come close to happening in the Eagles’ first three games of the 2018 campaign. For the first time this season, BC appeared vulnerable, and quite frankly looked nothing like a Top 25 team.

Purdue’s fifth-year senior David Blough picked apart the Eagles’ secondary, racking up 296 passing yards and a trio of touchdowns, building off his record-breaking performance against Missouri the week before. The Boilermakers’ offense was a spitting image of BC offensive coordinator Scot Loeffler’s unit—that is, the one that put up 52.7 points per game over the course of the first three weeks of the season. Purdue was methodical, calculated, and efficient, from start to finish, ultimately tying off a 30-13 victory. After losing its first three games by a combined eight points, head coach Jeff Brohm’s team not only entered the win column, but logged its first victory over a ranked opponent since 2011.

Ranked for the first time in a decade, the No. 23 Eagles (3-1, 1-0 Atlantic Coast) were drawing comparisons to Matt Ryan-led BC teams of the past all week in anticipation of their trip to West Lafayette, Ind. With the exception of one first-quarter touchdown drive, BC hardly looked the part. Right from the get-go, something was off.

For the fourth-straight week, the Eagles opened the game on offense. Per usual, Brown handed the ball off to Dillon, but the ACC Preseason Player of the Year didn’t have much room to run, gaining just seven yards on back-to-back carries—which for a player like Dillon, who averaged 7.3 yards per rushing attempt in Weeks One through Three, was essentially nothing. On 3rd-and-3, Brown’s pass was tipped by a Purdue (1-3, 0-1 Big Ten) defensive lineman and fell harmlessly incomplete.

All three plays foreshadowed what was to come: an ineffective ground attack and a boatload of deflections around the line of scrimmage. To make matters worse for the Eagles, a kick catch interference on the ensuing Grant Carlson punt call gifted their Big Ten counterpart decent field position.

On the very first play of the series, Blough was wrapped up by Tanner Karafa for a loss 10—he’d face that kind of pressure all day. In fact, when all was said and done, BC tallied five sacks on the afternoon. But the Carrollton, Texas native more than made up for the lost ground in due time. The 6-foot-1 gunslinger orchestrated a 12-play, 62-yard scoring drive that incorporated a bevy of formations, including both a jet sweep and a pop-pass. The rhythmic offense marched down the field with ease, capping off a the drive with a 1-yard D.J. Knox touchdown.

In a matter of minutes, though, the Eagles, namely Brown, responded. Michael Walker—who ended up recording 213 kick return yards, tied for the second-most in BC single-game history—jumpstarted the drive by running back the ensuing kickoff 60 yards all the way to the Purdue 38. From there, Brown converted a pair of crucial third-down conversions, the second of which came in the red zone. On 3rd-and-14, the redshirt sophomore snapped the ball out of the shotgun, took a three-step drop, and fired a pass to Tommy Sweeney in the heart of the end zone, marking Brown’s 10th touchdown pass of the season.

Unfortunately for the underclassman, the 15-yard connection also signified the end of his picture-perfect start to the season.

The next series, Brown was once again shoved to the ground for a Boilermakers sack. Drive after drive, the pocket reduced in size, in large part because of the Eagles’ stagnant running game. Ever since Dillon took over as the lead back at Louisville last season, BC had consistently ran the ball down opponents’ throats. Coming into the weekend, the sophomore hadn’t finished a game that he started with less an 89 rushing yards. That streak, along with a handful of others came to an end on Saturday.

Dillon—who entered halftime with just 21 yards on 11 carries—kept bouncing the ball outside, perhaps influenced by a pair of first-quarter highlight-reel touchdowns the previous two weeks. Regardless, Purdue contained and often stuffed the 6-foot, 245-pound back at or behind the line of scrimmage. Without a rampant Dillon, BC began to unravel, and the Boilermakers capitalized.

At the start of the second quarter, Blough dropped back and flung a pass to Rondale Moore on a slant route. The 5-foot-9 wide receiver snatched the ball and sustained a fierce hit from a charging Will Harris, shaking off the shoulder blow as if it was nothing more than push. Without hesitation, the freshman made a beeline for the outside and coasted 60 yards to the end zone, capping what could very well be a SportsCenter Top 10 play. There was question of whether Moore’s knee touched the ground following the Harris contact, but because it was too close to call, the touchdown was upheld.

The next few calls were not nearly as controversial—BC was simply shooting itself in the foot. On third down, a Harris interception was called back, as a result of a Zach Allen offsides penalty. Moments later, Blough scrambled for six yards, sliding toward the first-down marker. Harris tacked on a late hit to a defenseless Blough, handing Purdue 15 yards and a fresh set of downs. The lack of discipline didn’t immediately cost BC a touchdown. That said, it would eventually come back to bite head coach Steve Addazio and Co.

After another Eagles three-and-out, a 16-yard Markell Jones run set the stage for a 9-yard Moore touchdown reception. The shifty wideout slipped past the outstretched arms of a diving Taj-Amir Torres and skipped into the end zone for his second score of the game.

Right before the end of the first half, Brown was tasked with driving downfield to cut the BC deficit in a matter of 85 seconds. He didn’t get very far: On the first play of the series, his pass was batted at the line of scrimmage and intercepted by Kai Higgins. Brown made the touchdown-saving tackle, and the Eagles defense forced the Boilermakers to settle for a field goal, but the damage had been done.

After one half of play, Purdue had outgained BC, 200-37. The Eagles, who walked into Ross-Ade Stadium with the seventh-best offense in country—at least in terms of scoring and total yards—was helpless. Their secondary, usually vaunted as one of the better units in the nation, looked out of sorts, as well.

“On both sides of the ball, we’ve done some of the dumbest things I’ve seen us do ever,” Addazio told ESPN college football reporter Mark Morgan at halftime. “That’s uncharacteristic football for us.”

And it only got worse in the latter portion of play.

Brown, frequently trying to turn something out of nothing, was picked off on three of the Eagles’ first four drives of the second half, at one point coughing up the ball on three-consecutive series. One interception was tipped at the line, another was swallowed in the double coverage—erasing one of BC’s best drives of the day—and the third was off his back foot, a prayer of sorts. It wasn’t answered and perhaps the question of whether Brown is the real deal or not is still up for interpretation too.

The Eagles’ defense created opportunities during the final two quarters of regulation, such as Brandon Sebastian’s punch fumble and Allen’s acrobatic loose ball recovery, but none provided the spark the offense needed to mount a comeback. Takeaways aside, Jim Reid’s unit was still far from perfect. After all, it gave up another touchdown in the third quarter: Blough got Sebastian to bite on the pump fake and hit Terry Wright on the hitch-and-go for a 36-yard score.

E.J. Perry replaced Brown in the game’s final stages and stitched together an eight-play, 80-yard touchdown drive, but a missed John Tessitore extra point was just the icing on cake of what was a disastrous Week Four showing.

In the final minutes of regulation, the ESPN broadcast panned to the Purdue Homecoming student section. One fan was holding a gravestone sign that read, “RIP Boston College’s Rank: This Week-Last Week.” For BC fans, an optimistic six days were met with a rather cynical conclusion, one that’ll seep into Sunday as the Eagles drop out of the AP Poll.

Before the game, ESPN’s Amhad Brooks and Anish Shroff discussed whether BC could be the program in the ACC that challenges Clemson. After Saturday, it’s pretty clear that the Eagles aren’t the second-best team in the conference. Actually, now, no one’s really sure who or what they are.