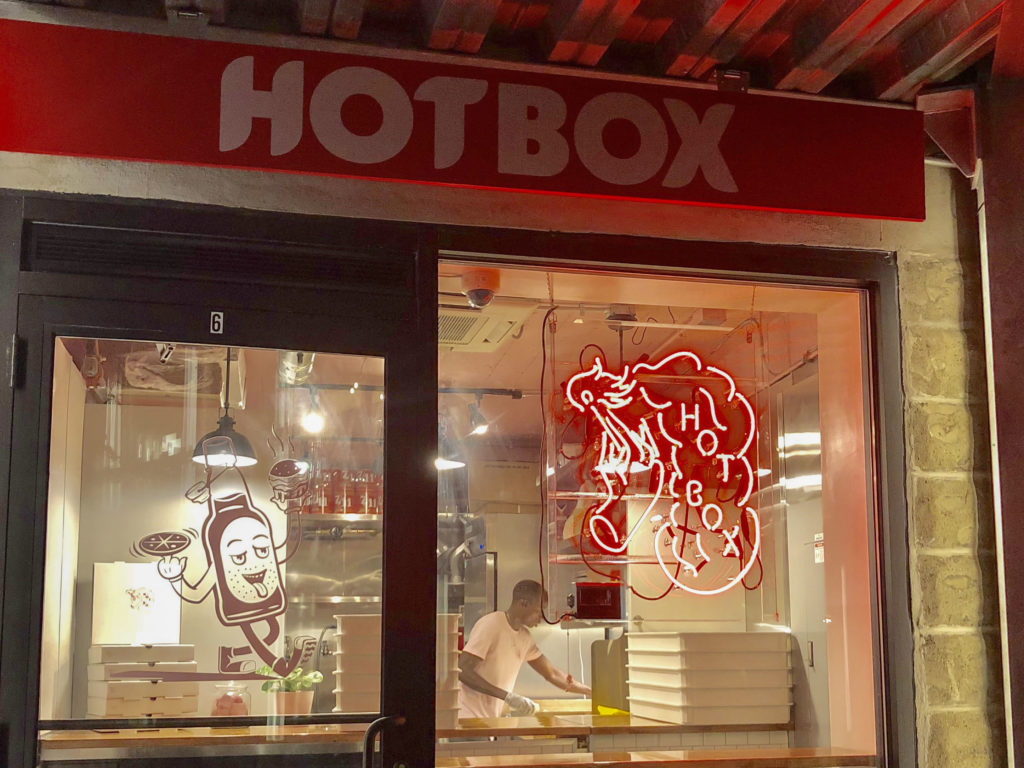 A quiet, unassuming lane near Union Square in Somerville holds a mystery that is all too enticing for passersby with an appetite for culinary exploration.

Packed away behind a live music bar and adjacent to rows of multi-story apartments, Bow Market presents a welcome juxtaposition: the warmth of the businesses shepherds people in from the chilly night and the high-occupancy eateries in the vicinity dwarf Bow Market’s “ma and pa” pop-ups. With neighbors on either side serving creative reimaginations of the classic pierogi and distributing empanadas out of an “empanada ATM,” Hot Box is in good company.

The classic diner aesthetic produced by the neon logo of Hot Box works in concert with the felt changeable letter menu to create an atmosphere that is no-frills but attentive to detail. The driving inspiration behind creating this intimate pop-up joint was a quasi-romantic relationship with the foods that defined much of the blue-collar diets of natives from the North and South Shore of Boston.

“The owners are from the North Shore, and I’m from the South Shore,” said Jesse Rosen, head chef at Hot Box. “Their pride and joy is the roast beef sandwich, and my thing is the bar pizza. We took both ideas and combined them to make Hot Box.”

Raised in Stoughton, Mass. and now living in Revere, Rosen has a deep appreciation and affinity for the bar pizza of the South Shore. Outside of his love for this South Shore staple, Rosen enjoys the opportunity to be a part of a more unique food market and experiment with new items such as fresh-baked English muffins for Sunday brunch.

Hot Box also offers its twist on the classic North Shore staple: a roast beef sandwich with a melted layer of American cheese topped with mayonnaise and barbeque sauce oozing out from a sesame or onion roll. The South Shore is represented by the bar pizza, a New England classic that’s typically 10 inches in diameter and cooked in a pan. The classic South Shore bar pizza is a traditional cheese pizza served with tomato sauce, cheese, and oregano. Other varieties of bar pizzas at Hot Box include onion and mushroom, pepperoni, white, and dill pickle pizza.

Currently, Hot Box is open for business as part of a soft launch, an approach that allows the owners to gradually optimize Hot Box’s workflow and get the kinks out before expanding the menu and accommodating larger order volume.

With a small but efficient kitchen layout, Hot Box offers an intimate customer experience. After browsing the simple menu consisting of a handful of items and placing their order with the chef, people can peer into the kitchen and watch their food being prepared at the moment.

A dough prep station is situated on the other side of the wall separating it from the main kitchen, where Hot Box employees move swiftly around the kitchen, taking orders, cleaning, and preparing dough for Mike and Patty’s, a downtown pizza location run by the same owners as Hot Box. English muffins and pizza crust dough are made in the Hot Box kitchen because of its brand new machinery and dedicated space. While most neighboring pop-ups at Bow Market are forced to work out of commissary kitchens, Hot Box prepares, bakes, and delivers food to its sister restaurant in downtown Boston.

By using locally sourced feta and ricotta, mushrooms grown from a nearby vineyard using an old Japanese horticultural technique, and produce from a neighborhood farmers market, Hot Box upholds a culinary ethos that is founded upon an attention to detail that elevates the noticeable quality of all its comfort food creations.

“I’ll go the hard way to get a better product,” Rosen said. “Source the stuff correctly, and people will respect that.”